It's Friday!  Signing up with Kelly for Seven Quick Takes...
1)
Phil turned FORTY last weekend!
I told him we were going out to dinner and then surprised him with a party at home.  He was indeed surprised...and I was happy to be done with the lies and deceit. 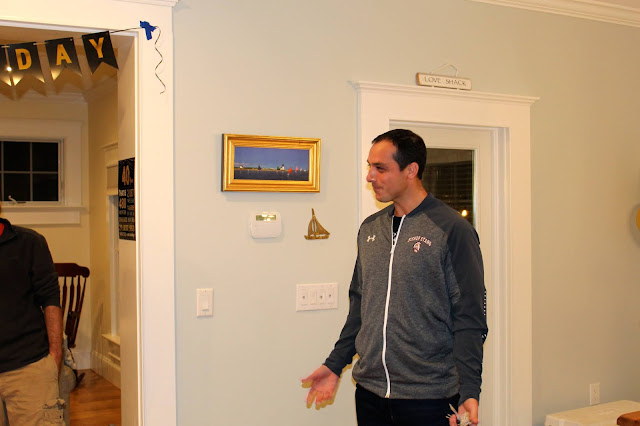 I got food from a delicious barbecue restaurant near us, added a few homemade things, and we literally ate it for three dinners in a row.  If you come to our house, we will always have too much food, but hey it's better than too little!  Thanks be to God. 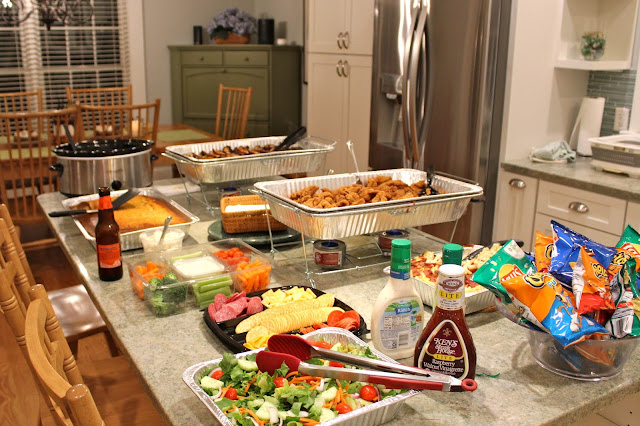 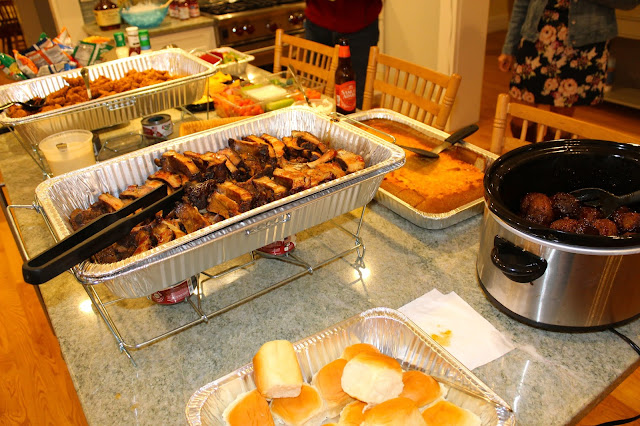 There is an upscale bakery where I ordered his Reese's cake from, as well as an assortment of cupcakes, and they were so tasty!  I'm not a big cake/cupcake fan, but this cake won me over. 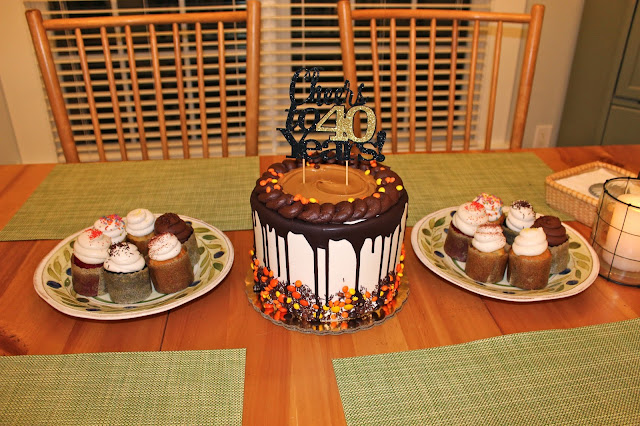 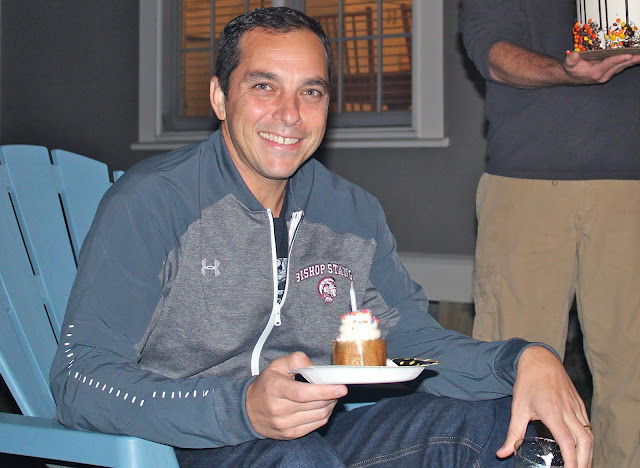 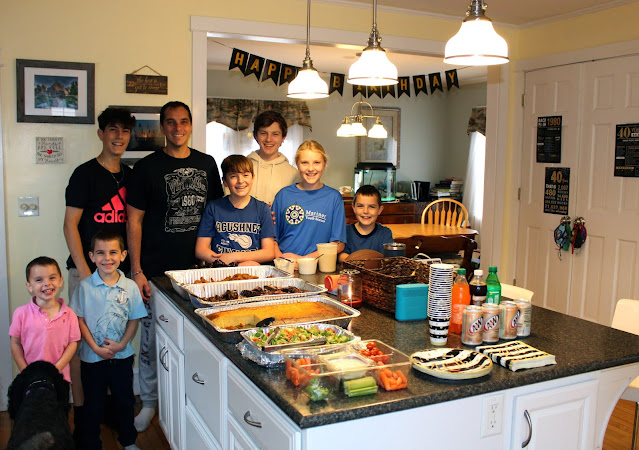 He got some great gifts (even if they were wrapped in apple bags!) and the working boys bought him scratch tickets which he won a little moolah on.  All in all, it was a great covid birthday.  I realized that if these COVID rules go through March, everyone on the planet will have had a COVID birthday.  We will all have a lot of real celebrating to do once it (ever?) ends. 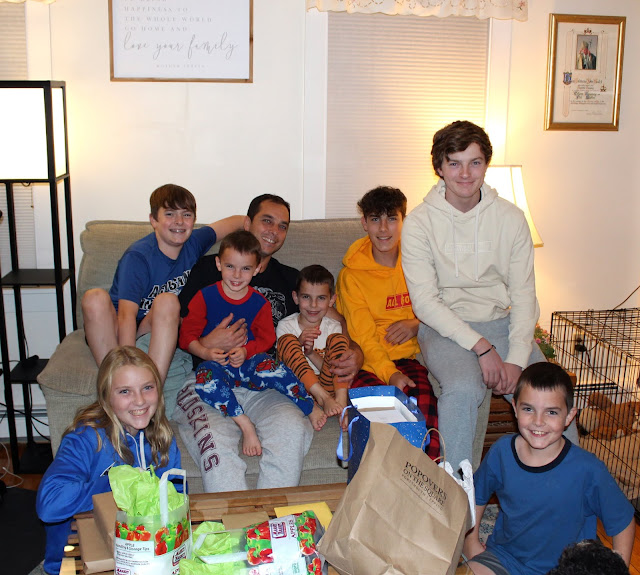 If A Clean Floor Thrills You As Much As It Does Me...

...then do I have 2 suggestions for you!

I saw that GoCleanCo had recommended this brand, and we have been dragging our feet too long on getting a vacuum that works well, so I took the plunge and added this guy to our family:

Guys, I vacuumed the carpets with our old vacuum that morning and then the new one was delivered, so I wanted to test it out.  Look what it pulled up from three rugs THAT HAD ALREADY BEEN VACUUMED A FEW HOURS EARLIER!! 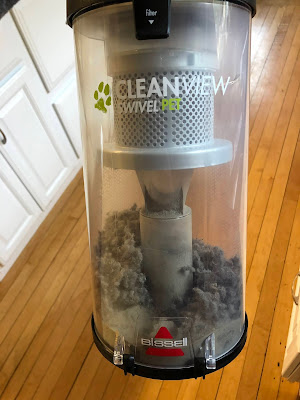 We really needed a new vacuum.

Also, since it's a Prime Day lightning deal right now, and I love this mop with my whole heart (easy to wring out! no bending over! throw the mop head in the washer!) I also strongly recommend this bad guy:

Your floors (and family) will thank you!

1)
Andrew turned SIXTEEN!
He and his friend Caden went to the Seekonk Grand Prix a couple of weeks ago as his "party".  These are weird times, and Andrew is the type of kid who can't decide who not to invite to a party for fear of hurting their feelings, so he thought it would be easier to just go somewhere outside with one friend.  They had a blast and it was the right decision.
On his actual birthday, we were still awaiting results from a COVID test he had to take because he had left school with an upset stomach earlier that week.  Guys, every single ailment you could possibly have is a symptom for COVID and requires a test before you can come back to school.  So we got him tested on a Thursday and didn't find out it was negative until Sunday around 1pm.  The poor kid had to miss his first varsity soccer game of the year and Mass on his 16th birthday.  As soon as we found out it was negative, we gave him a gift...here he is practicing his gift opening face: 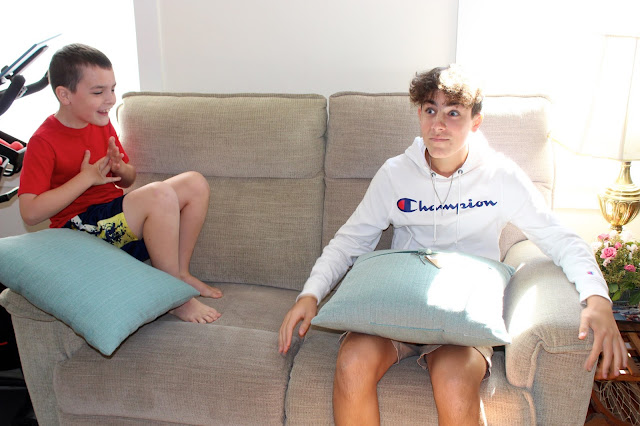 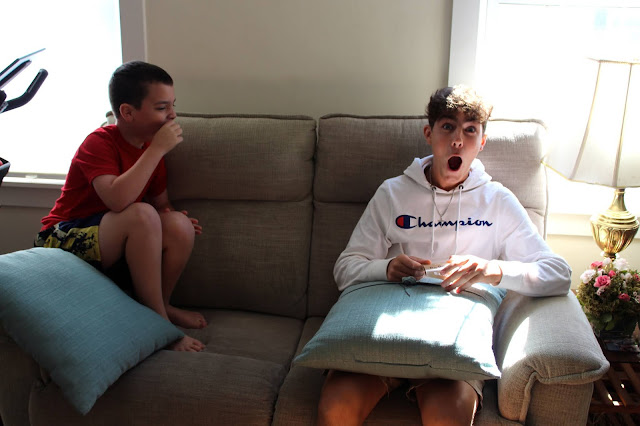 We gave him a Kohls gift card and I told him we were going shopping.  He was so happy because that kid loves buying new clothes and shoes.  I wonder where he gets that from? ;)  Before we left, we told him to go get his gift from Gammy and Grandpa, who also got him a Kohls gift card.  It's almost like it was planned or something. :) 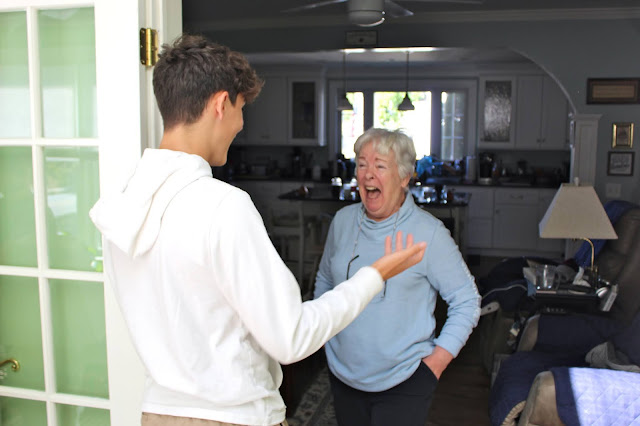 Dinner is such an important part of the day, don't you agree?  In our home, the most common questions asked by the kids are "What's for dinner?" and "What time is dinner?"  Phil and I also spend a lot of time talking about what to cook for dinner, what we need for dinner, when to start cooking, how to prep anything the day before, etc.  Dinner is definitely the highlight of the day in our house.  Because it takes up so much of our day to plan, shop for a last-minute ingredient, cook and serve a meal for nine each night, we try to make sure we all enjoy the meal together, and as slowly as possible.

Growing up in a family of eight, I can remember my mom finally sitting down at the table, only to have the first couple of kids already finish their plates.  She or my dad would remind us that even though the meal could be eaten in a few minutes, a lot more time and love was spent creating it, and we needed to stay together at the table for a while.  I think all moms understand the sentiment.  On holidays, I can hear myself proclaim, "This took me all day to make, so you're going to slowly enjoy it!"

Our third child turned FOURTEEN!  I keep telling them to knock it off, but they just keep getting older.  Thankfully, Phil brings me flowers to ease the pain :) 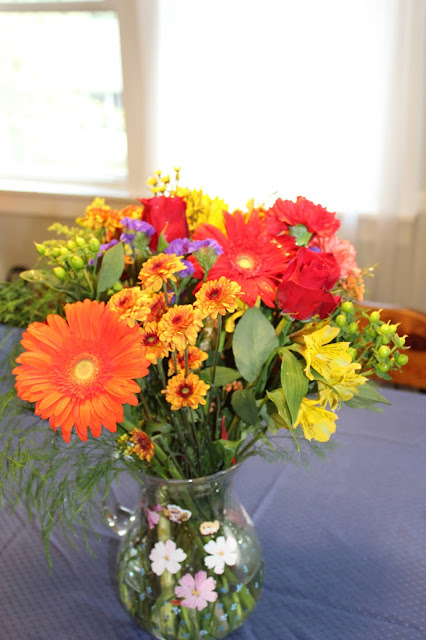 Eamon asked for "football food" and an oreo cake for his birthday dinner.  The boy is still a major sports fanatic and is typically found tossing around a ball inside if he's not playing outside.  He loves to jump on the trampoline for hours and still asks Phil to go out and throw a football on the daily, and who can deny this sweet boy's request? 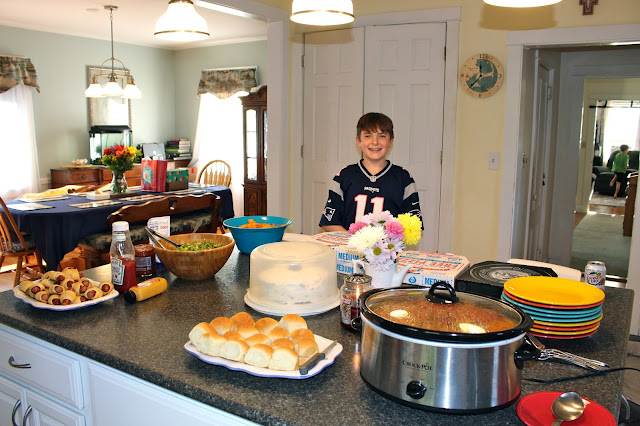 Wouldn't you know it...it's FRIDAY!  And I'm linking up with the birthday girl, Kelly for Seven Quick Takes Friday.

Wouldn't you know it...right after I posted about quitting Instagram because it had blocked all of my activity, I heard that sometimes that happens because you have a website linked in your bio.  I have this here bloggy linked in my Instagram bio, so I deleted it and VIOLA! I was able to comment/like/caption my photos and follow Jim Caviezel (which was the most important task of the week).  So now I'm in a tough spot because I really do want to quit Instagram until after the election is over, but I also want to post a few things before then...we have birthday season coming up.  What to do?  Stick to my guns and quit cold turkey, or quit after Columbus Day?

Last week, my parent's fridge broke and it was a lot of scrambling for them, and sticker shock, to buy a new one that was available to take home.  They offered us their old fridge, which wasn't that old and probably only needed a part that was no longer being made, but that we could possibly find on eBay or the likes.  We hemmed and hawed and finally said no just get rid of it because our fridge was working fine, and we weren't sure if replacing that part would even work.

Wouldn't you know it...our fridge died this week!  Seriously!  On Tuesday we got home from work and the food was warm.  We saved what we could from the freezer (I cooked the weirdest dinner that night trying to use whatever I could) and then ran out to a scratch and dent appliance store.  We found a fridge that looked great, just a couple dents on the side, but nobody sees that, and two small dents on the bottom front, but seven kids are going to add to that anyway.  We borrowed my dad's truck and picked it up (delivery was going to take three weeks!) and then the real fun began. 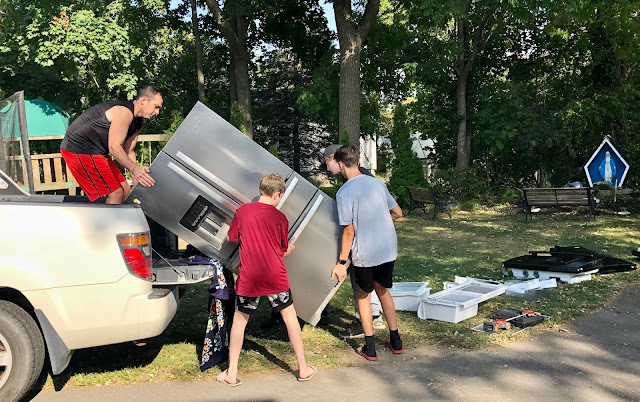 We live in a two-family house, on the second and third floors.  So we had to get our old fridge down the stairs and our new one up the stairs.  The old fridge was easy to remove because Phil broke it apart in pieces, but the new one was a BEAST to bring up our hundred-year-old narrow staircase.  Phil actually had to cut out a chunk of our wall in the staircase to maneuver the fridge to fit.  Then when he got it to the kitchen, we realized that we had installed an island since the last time we bought a fridge, and trying to get it around that was another major feat.  But my strong, smart husband (and helpful teen boys) figured it out and seven hours later, the fridge made it to it's home. 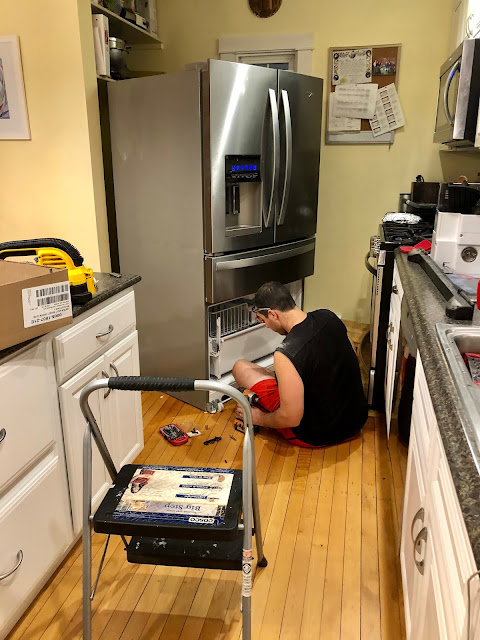