It's Friday!!!!  We are heading to our kids' school's Halloween dance and Haunted stage tonight.  Andrew and his 8th grade class have been working hard on the stage, and I'm excited to get frightened!  Linking up with Kelly and the other ghouls, mwahahahaha :) 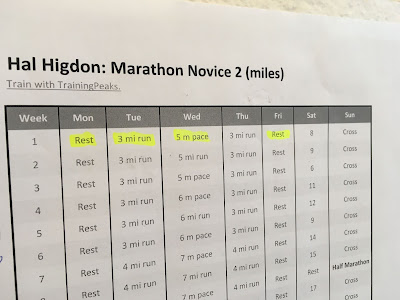 Marathon training has begun!  Guys, I still really, really can't picture myself running 26.2 miles in February.  Realistically, I can see myself running another half-marathon instead.  But!  I will try and follow this training schedule, and see what happens.  So far, so good...I mean it is one of the lowest mileage weeks in the whole plan, and I've had two rest days already ;)  But tonight I'm getting my first long run done before the Nor'easter comes tomorrow.

Some people need a goal in order to push themselves to achieve it.

I am not one of those people.

On Wednesday, we had a 5 mile run planned, and the whole day I was dreading the run.  Why?  I would normally have run 5 or 6 miles that day anyway.  But it's because I feel like it's being pushed on me, even though I'm choosing to getting pushed!  This is why diets are so hard for me to follow, it's not so much of a lack of willpower, as it is somebody telling me what I can't eat or what I have to run.  I'm like "You don't know me.  You don't know my life!"  But then, left to my own design, I will normally choose to prepare healthy foods and exercise daily.  I guess you could say I'm a bit neurotic complicated.

We got a new toilet (it was half that price at Lowe's).  It's so high!  It's so white!  The seats close softly on their own! Am I more excited about this than I should be?  Yes!

JP went to the homecoming Dance on Saturday.  Here's what I posted on Instagram about him and his cousin Bridget...

On the eve of our wedding, my sister and her husband asked Phil and I to be godparents to the little baby brewing in her belly. 🧡
Four months later, Bridget was born and we went to meet her at the hospital, while keeping a little secret of our own. 🧡
Five months later, JP was born and he and Bridget were inseparable. I babysat Bridgie while my sister worked and these two were the best of friends. I always joked to my sister that they were future prom dates. They went to the same school (same class) from preschool until Bridget left in 4th grade to attend a different school. JP was devastated. 🧡
They finally reunited again in high school, and though they have different classes and different friends, they are still so close. They asked to carpool to the Homecoming dance together. 🧡
Cousins are SUCH a gift. I never knew mine well, as they mostly lived in Ireland or Pennsylvania. I’m so grateful that my kid’s best friends and family are one in the same. 🧡

My Theology-teaching hubby is a funny texter... 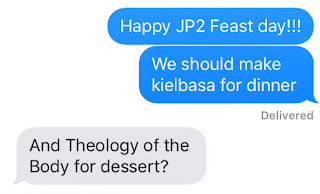 I can see the basketball lights at the end of the soccer tunnel.

Got apples?  Make Ina Garten's apple crisp.  I don't use the orange (I find it overpowering) but keep everything else the same and it is YUMMY IN MY TUMMY.  It makes loads of the crisp part, so you can add tons of apples in there and feed a crowd.

And that's a mummy's wrap folks, see ya in November!
"Thunk" by Colleen