Happy Friday!  What a week!  (Do I say that every week?  I'm like the girl who cried wolf!)  Linking up with Kelly and the betters...

Phil's birthday was last week and I never mentioned it! 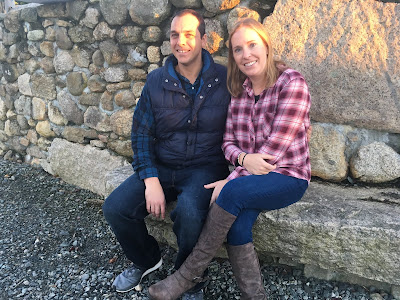 He's the third birthday within two weeks at our house, so he basically gets nothing even though he deserves EVERYTHING.  Love him so much.  We had swimming and soccer and basketball to drive the kids around to, but did manage to fit in a little homemade pizza and cake.  The kids made him sweet cards, and I got him some gifts (pizza stone, Redskins joggers,  a Catholic Journaling Bible, and a book he wanted) and then we went out to dinner the next night and between the birthday deal from the restaurant and a gift card, we only spent $6.  Talk about a cheap date!!  Happy 38th bae! 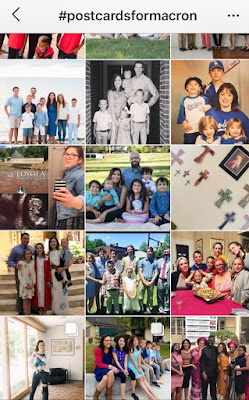 #postcardsformacron has been my favorite way to find some awesome ladies on the grams this week.  What was that guy thinking to upset all these well-educated women who are raising a lot of future voters??  Educated women aren't defined by the number of degrees they hold, and Moms aren't defined by the number of kids they have.  If you disagree with Macron's statement, send a virtual postcard.  Thanks!

The little boys have some kind of virus, just cold symptoms and tummy troubles, so I brought them to the doctor last week to rule out ear infections (Brendan gets them frequently) and it was basically a wasted trip.  Nothing diagnosable and I'm sure we picked up a TON of germs because they were into everything, as toddlers gotta be. 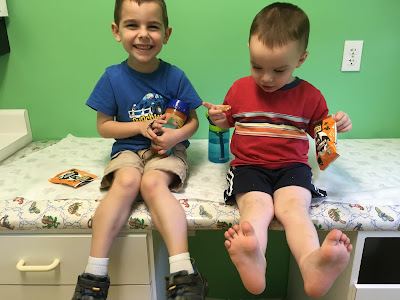 Updated - Brendan does indeed have an ear infection now and Declan has a pretty bad sounding cough.  Winter in New England has arrived early.

We only let them play one sport on one team at a time because, as you can imagine, it's still too much to handle.  I'm thankful that JP will be getting his license in less than a year!  I'm also thankful that we have no little babies to drag all over the place, it's a lot easier to throw a 2 year old in the car with a bag of goldfish and a sippy cup of water :)

My sister-in-law got engaged! She's the last of all of our siblings to get married, which is a little sad that chapter is over, but there will be quite a few family weddings in the future with all of our nieces and nephews.  We are happy to welcome a new brother-in-law to the clan.

Our Catholic high school has Spirit Week this week, leading up to the big Homecoming football game and dance this weekend.  Wednesday was dress like a holiday, so I chose Labor Day: 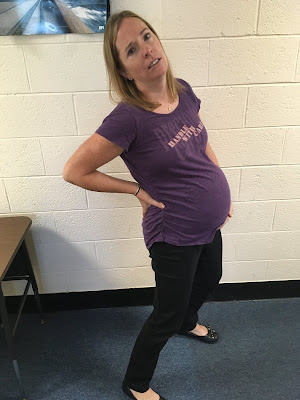 You guys would not believe how many of my coworkers thought I was really pregnant!  They see me daily!

This is our last weekend of non-marathon training before we start on Monday!  Eeeek!  I feel like I won't actually run the marathon on Cape Cod in February - because I can't imagine an uneventful 18 weeks of training during winter months, between the weather and illnesses and possible injuries - but we're gonna start the training anyway and just see what happens.   Phil's a good sport and just does whatever I do when it comes to diet and exercise, but even he thinks this is a bit crazy. 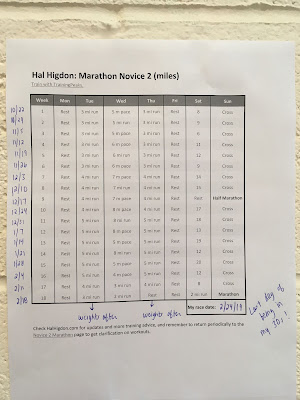 If we do make it to the starting line, and then finish line, I will be able to say I ran a marathon riiiiiiiight before I turned 40 and for some reason this is enough encouragement to get me started.