Suddenly, starting out with nothing actually sounded good!

We had to dig ourselves out of all that debt, and that took us eleven years of making extra payments, driving old cars, not spending any unnecessary money at all.  We were determined and driven to erase that debt, and thank God made it happen while the kids were younger (they seem so much more expensive now!).  Once the student loans were paid off, we were able to live with a little more wiggle room in the budget, but things like daycare, tuition, braces, technology, sports, textbooks, bigger vans, etc. quickly entered in and here we are, living the American dream of paycheck to paycheck ;)

But!  There is a light at the end of the tunnel.  Daycare costs will end in July!  If we don't have any more babies, that is a huge expense given up and the plan is to finally start saving for the future.  Of course, the future includes soonish expenses like driving lessons and cars, insurance, college tuitions, etc.  Always something!  At the same time, there is also always sufficient grace and God's providence.  So while I budget and plan like the accountant I am, I don't stay awake at night wondering how it's all going to work out.  Experience has proven the time spent worrying is not worth as much as the time spent praying and working.

The world may think we have done things in the wrong order, but this family of ours is worth more than any money sitting in the bank.  We jumped in, excited and eager, to see all the God had planned for us.  We are so thankful that we took this chance on each other, on being open to many children, and are willing to keep putting in the work required.  These are the lean years, spent building and growing, that require a whole lot of faith and hard work, and yet we are enjoying our life as it unfolds.  Turns out our story is a lot like my father's after all. 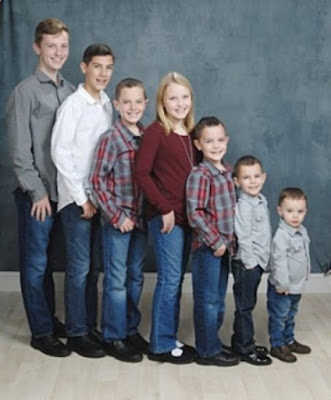