7QT: Things I Want to Record and Remember

A few things I want to remember, because you know, old age steals the memory...

In 40 years of being a practicing Catholic, I never knew that the Church used to have a much stricter Lenten practice in place whereby everyday in Lent (except Sundays) we had to fast by only eating two small snacks and one larger meal, and no meat until the larger meal.  How did I never know this?  Kelly wrote an excellent post about this here and my pastor writes in the bulletin this week:

THIS YEAR, GIVE UP MORE THAN JUST CHOCOLATE
The hallmarks of Lent are the actions of prayer, fasting, and almsgiving. Many of us would define fasting as “giving something up”: chocolate, wine, beer, or some other (legitimate!) pleasure that we give up for Lent as a sign of our taking personal responsibility for our sins and showing our sorrow for them. At present all Fridays in Lent are kept as days of abstinence on which neither meat nor meat products (e.g. chicken soup) are consumed by those over the age of 14. For those between the ages of 18-59, Ash Wednesday and Good Friday are days of fast as well as abstinence. On these days, Catholics are enjoined to eat only one full meal and two snacks that together do not equal a meal, with no meat. It should be noted that these are the minimum – we should all try to go further. In the past I’ve heard comments to the effect that fasting doesn’t matter – “just do some more nice deeds for others.” This attitude is simply wrong – yes, we should do more charitable deeds during Lent, but true conversion involves not only increasing the good we do but also confronting the sins of which we are guilty and expressing signs of amendment of life. There is no better way to do this other than fasting. So, how can we go further than the bare minimum of fasting? It might help to look to the past for inspiration. A century ago, the following were the practices of Catholics; this Lent, let’s all try to incorporate some of these into our own practices:

Every day of Lent, except Sunday, was a fast day (two small snacks and one larger meal).
Meat was only eaten at the main meal of the day.
Fridays through Saturday afternoons were times of complete abstinence – no meat at all.

The reason that the Church lightened the expectations on fasting & abstinence was so that Catholics could better adapt fasting to their own needs and state of life. Even if you are unable to follow the full regimen listed above, I encourage you to reflect on whether you can make different elements of it part of your Lenten experience. The more we enter into the spirit of the Lenten fast, the more we shall experience its fruits.

When I talked to Phil about trying to live Lent this way this year, he was totally on board, already knowing this was an old church practice (thanks for telling your wife!).  I have to admit though, the "no meat until the larger meal" is gonna be hard, because we usually eat soup for lunch and I put chicken, turkey, or beef in there for protein.  Gonna need some vegetarian soup recipes!  Phil made a great point in explaining why fasting is so hard for us nowadays when it was just par for the course back then.  He said, "I think as a society, we all have more {food choices, material goods, technology} than people did in the past, and so we have to give up more stuff to do the same fast."   Very true, but, that doesn't mean we shouldn't try!  I actually love just following the church outline instead of having to figure out something to do each year.

Declan, who will be turning five next month (nooooooo!) is so funny about the passage of time.  He refers to anything that happened in the past as happening "yesterday" and anything in the future as "tomorrow".  For example, he'll say "Remember when we went to Great Wolf Lodge yesterday?" when we actually went last summer.  He also makes choices based on what he did the last time.  For example, he has two toothbrushes, and he has to alternate between both every other day.  And at Mass, if he comes up to communion with me one Sunday, then the next Sunday he stays in the pew.  You know, because he went up with me "yesterday" ;)  It's super cute and confusing at the same time. 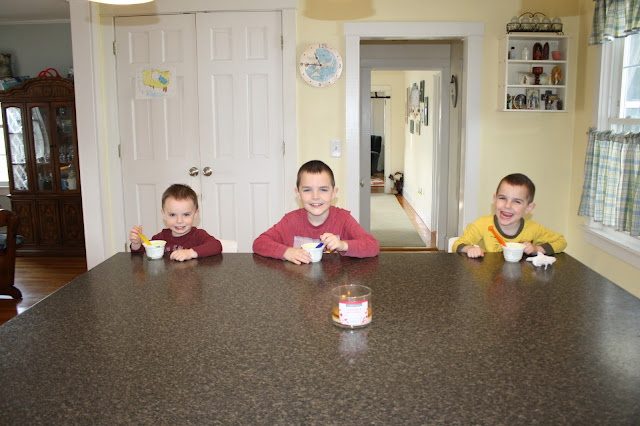 I changed my header - did you notice?  I had to update a few of the kids "hobbies", namely Xander to piano and Maggie from Irish Step Dancing to swimming.  Plus I added Lucy Goldendoodle and turned Brendan from a baby into a toddler because my baby is 2.5 now.  I also retired my tagline of "Just a Catholic mom, changing the world...one diaper at a time." since I'm hoping not to be changing any more diapers after this summer!  (Unless God sends us another baby!)

How Brendan says "Come in here, Mom" so angelically when he wants me to play with him in the family room.  Little Sweetie.

How Brendan also says "Go to the kitchen, Mom" when he wants to illegally play with an older sibling's kindle.  Little Stinker.

I want to remember how much the kids just want our time and attention.  Maggie and Alexander love having a family movie night so much if Phil and I sit and watch with them.  They also always want to help me in the kitchen.   Declan and Brendan will cuddle up for a book or die of happiness if we tickle tackle them, have a dance party, or just sit on the floor and play with them.  The big boys have been boxing at night with Phil (we have these gloves in adults, kids, and these mitts), and they love doing things like that.  They are always up for playing football, shooting hoops, or playing frisbee as long as he is involved.  We might not have the resources to give them many material things, but we can give them our love in the form of time spent together.

Andrew is in 8th grade and I had to submit a photo and message for the yearbook.  I think most moms are like "TIME FLIES SO FAST AND I CAN'T BELIEVE YOU'RE HEADING TO HIGH SCHOOL!!"  But with this kid, it's not a shock that he's almost done with his elementary school years.  He has always been very mature for his age, such a great leader for our family, and he has been excited to spread his wings in high school for the past couple of years.  I chose the photo below to put in the yearbook, even though there were so many good ones to choose from, because being outside and active is just his favorite thing.  He's always been such a cute kid, and now he's our handsome young man (and oh boy, do the girls agree!). 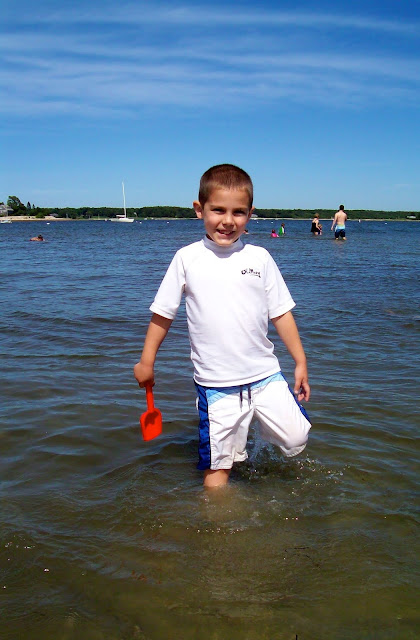 As much as I'm good with letting him grow up, I still want to remember him just like this.

Have a fruitful first weekend of Lent everybody - remember to feast on Sundays (it's church teaching!!)
"Thunk" by Colleen