Another half-marathon in the books, and boy are my legs tired!  That is it folks, no more long races for me, I'm officially retiring.  But first, let's look back on the weekend...

I made these Irish flag cookies for the kids on Saturday night after our carbo-loaded meal of pasta and meatballs and garlic bread.  As a family, we give up sweets for lent, but we can eat them after the vigil Mass on Saturday through Sunday night.  So we are ready for some yummy desserts each weekend!  These fit the bill. 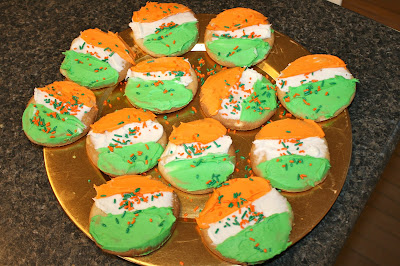 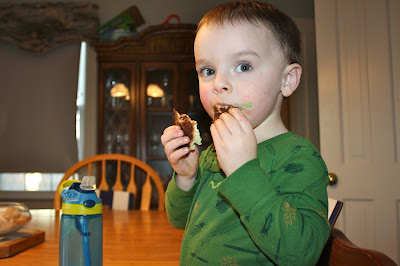 On Sunday morning, the littles awoke to a couple of gifts from the leprechauns...

Those silly leprechauns!  And then we taught them that if you're not wearing green on St. Patty's Day, you have to get pinched! 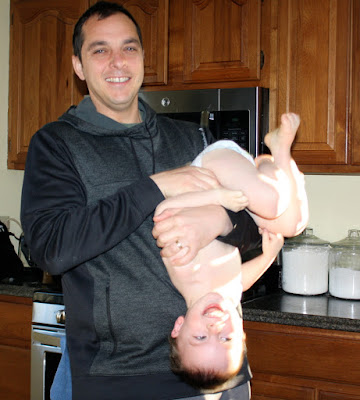 Phil and I ate an english muffin egg sandwich and a beet smoothie for our pre-race nutrition.  Also, coffee and water/gatorade! 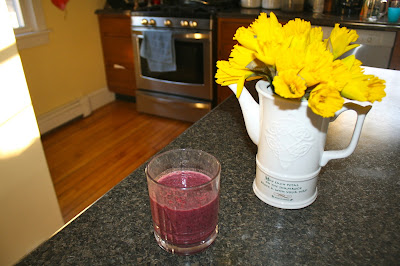 I couldn't decide how to dress for the day, it was going to be 35 degrees at the start line, but sunny.  The race route is along the ocean for a while, and it tends to be cold and windy over there, so I decided on capri leggings, a tshirt, a running jacket, and of course my new sneaks! 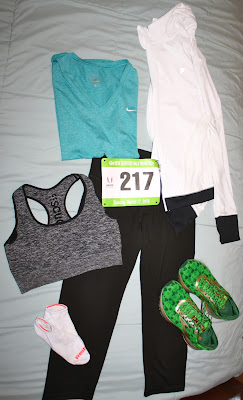 Once dressed in green (no more pinching!) these wee lads posed for a photo:

Then we asked JP to take our photo before we headed out at 10 am to get downtown.

Oh sure, we're smiling, but on the inside I was nervous as anything.  My heart rate was in the low 100s all morning, even while I was sitting down.  My stomach had butterflies living in it all weekend, it was terrible.  I seriously almost chickened out multiple times, especially when I woke that morning to a sore throat.  But, Phil was my rock and biggest supporter, and any thoughts on how fast I wanted to run were replaced with just running to finish.  No pressure!

We got downtown and parked very easily on the street and then headed to the chapel for some Adoration before the big race.  It was freeeeezing outside and just being in the warm chapel with Jesus made us feel better.  We wondered why more runners weren't in there, at least to keep warm, but sadly, I think Adoration is lost on the young generation (and most race runners were of that generation). 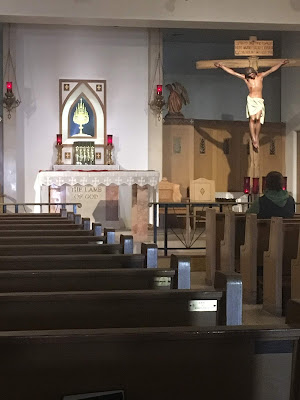 We went to the bathroom (twice) and just rotated between stretching, walking around, and praying.  The race started promptly at 11 am and we had been in the porta potties while everyone was lining up, so we kinda squeezed in at the end.  In one sense, it was great because we weren't fighting the crowd for the first mile or so, but on the other hand, I think it made our first miles a bit slower than it would have been with the crowd pressure.

1) Before the race, my mom told us to remember that the only race that counts is the race for heaven, and she suggested that I didn't look at my watch, to take off the pressure.  I was wearing a jacket that had thumb holes, so it was hard to check my watch anyway, so I never did.

2)  This was the first half-marathon that we brought along Gu to eat, and it really helped.  I had two and Phil had three during the race.  We also both had something to listen to - mine was pop music with some Irish jigs mixed in, and Phil to a podcast about something holy, I'm sure.  That was our first time running "together" without talking.

3) One of my friends (hi Bethany!) who is an awesome runner, but who is currently pregnant, passed by me around mile 4.  I saw her use the porta-potty soon after, and was able to pull ahead of her for the race.  I shouldn't be so proud to finish before a pregnant lady, but she's a Boston Marathoner, so I'll take it!

4)  There was a group of high-school aged kids, all wearing tutus, who kept walking through the water stops and then would run past us in a line.  It felt like they were hogging the road, and it kept happening after every water stop.

5)  We never walked one step.  Not up all those hills (I just put my head down and ran) or through any water stop (I just took a sip and threw the rest away).  It's fun to litter during a race :)

6)  The wind by the end of the water was really strong and cold.  But overall, it was a beautiful weather day!

7) Around mile 12, we started to see runners, wearing their medals, who were running back towards the unfinished racers.  It was making me so mad.  Like, I get it, you're fast!  You're done!  But we're not, you showoffs!

8) The crowd support was definitely less this year than in year's past.  I think because it was so cold to be standing still outside.

9) It's so awesome to run.  I thanked God for a healthy body, for giving me time to train, for my kids for understanding how important fitness is to their parents, for a goddaughter who handled pickups and dropoffs for us that morning, for all of you, for the beautiful creation of His world, etc.  My co-worker and another co-worker's son are both being treated for cancer, and I prayed and offered up any discomforts for them the whole time.

10)  Phil is just the best partner for me.  He knows when to push me and when to let me relax.  He jumps on board with any training plan I come up with, and makes it work.  All of our long runs are "dates" and we never get sick of talking to each other (when we have the breath to talk!)  Even though we didn't talk much on this race, just knowing he was by my side, holding my water and giving me thumbs up at various points was perfect.

The miles ticked by, some slower than others, and two hours later, we were done!

Was I incredibly disappointed that I didn't finish under 2 hours?

(I mean, I missed it by 2 seconds.  I should have looked at my watch.)

However, as the guy in front of me said, upon hearing how much I regretted those 2 seconds... "But how many seconds of that race didn't you regret?"

The rest of them!

And as Phil pointed out, what do those 2 seconds really matter in the end?  Nothing.  Just bragging rights, and I don't need more pride :)

We got our medals, some water and orange slices, and got stretched out by our chiropractor's team.  After I got off the table, my right toes started cramping up so bad.  They formed like a hook, so I quickly threw off my shoe and stretched my toes against the sidewalk.  I had to keep my foot like that for a few minutes while I drank water.  It was a weird feeling and I didn't like it one bit.  Then we walked down to the Y to get the fish sandwich and clam chowder. 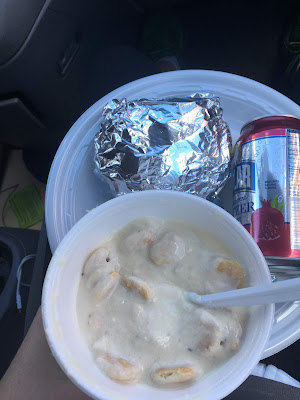 I ate half the chowder and a few bites of the fish sandwich in the car on the way home.  Worst decision ever!  I was nauseous the rest of the day!  I shouldn't have eaten, I wasn't even hungry, I just thought I should put some calories in my body since I burned 1520.  But really, I should have just listened to my body and ate when I was ready! 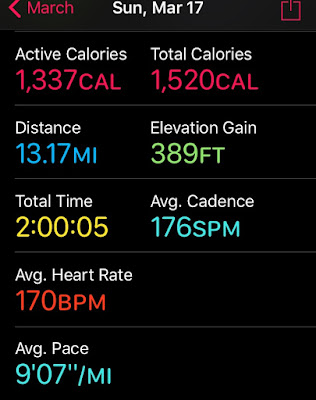 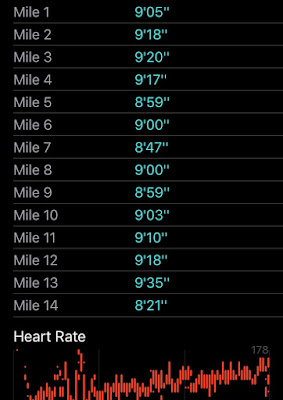 The slower miles were the hilly ones - phew!

All in all, I am so glad it's over.  I'm glad the training is over, I'm glad the anxiety is over, and I'm glad I can just take some fun kickboxing and weight classes again.  The last 5 months were way too running-heavy for me, I like to mix it up more.  I set a resolution to run 1000 miles in 2019, and I've already run 322, so only 678 to go, which is about 17 miles per week until the end of the year.  That's half the amount I was running weekly, so it sounds easy...we'll see!

I  am very sore today, but I know it's a "good" sore and will go away.  Until then, you'll know me by my limp.  I hope you all had a (more) fun St. Patty's Day.  I'll be celebrating much better next year, God willing!
"Thunk" by Colleen