On Brendan's last day of being a two year old, we took the "littles" to Story Land in Glen, New Hampshire.  You're free until you're three at Story Land so we made the cutoff by the skin of our teeth.  First stop was a photo with the clown (I have one of these from each year we visit). 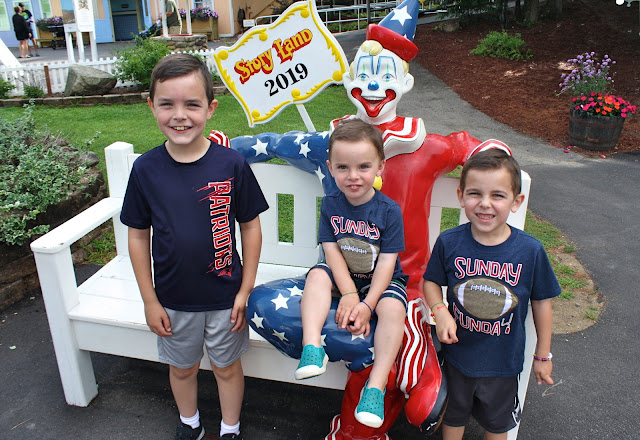 Next stop was the Antique Cars.  This line is always the longest and so we wanted to get in right when the park opened.  Funny story, I had just sunscreened and bugsprayed everyone when we got out of the car (we travelled from MA where EEE is making history this summer, unfortunately) and while we were in line, a little girl in front of us exclaimed "Something smells!" and her mom quickly shushed her.  I laughed and said "Oh it's us!  We smell like lemons from the bug spray!"  and we all chuckled at the little girl's lack of filter. 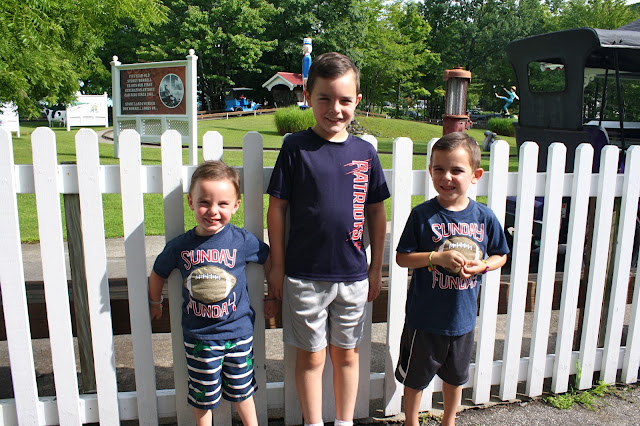 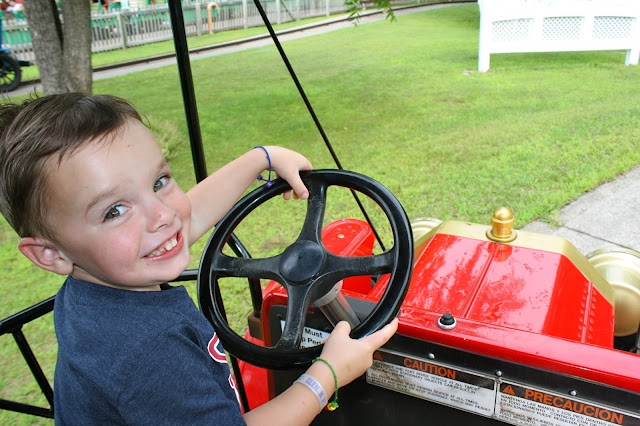 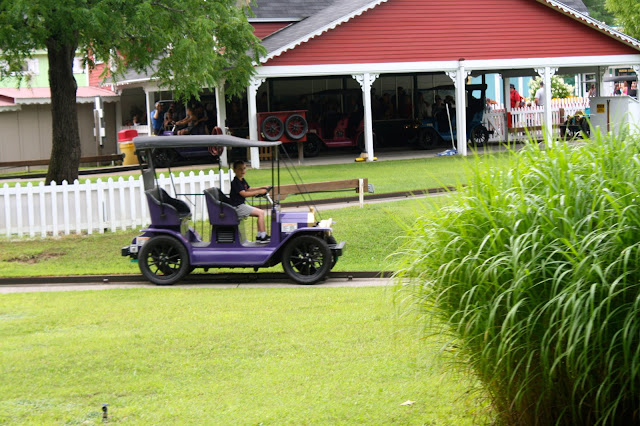 As we were getting closer to the front of the line, the antique cars pull around the bend automatically after having dropped off the last driver.  I was pointing this out to Brendan: "Look, the car is driving all by itself!" He was enthralled, and I jokingly said that it must be a ghost driving the car.  Well, the ghost cars became the topic of conversation for the rest of the day, he thought it was so cool. 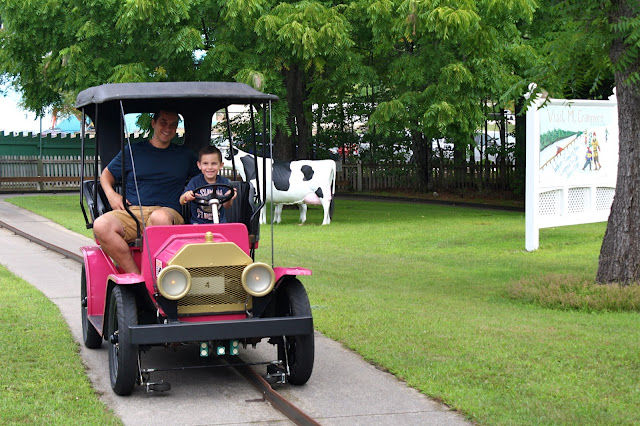 Next up was the flume ride (we rode this one three times, it's Xander and my favorite).  You can't see it here, but at the front of each boat is a face of a panda bear that looks like he's screaming.  Brendan started talking about the "scared panda" while in line and then said "Oh!  He's scared of the car ghost!"  I love watching his little minds work.  He needed to know why the panda was scared and remembered the ghost and his little world all made sense now :) 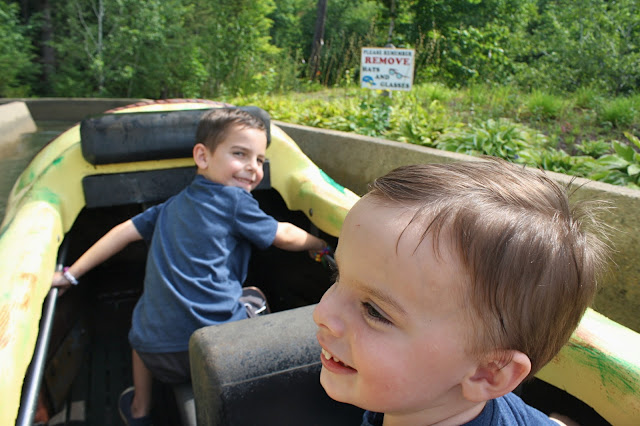 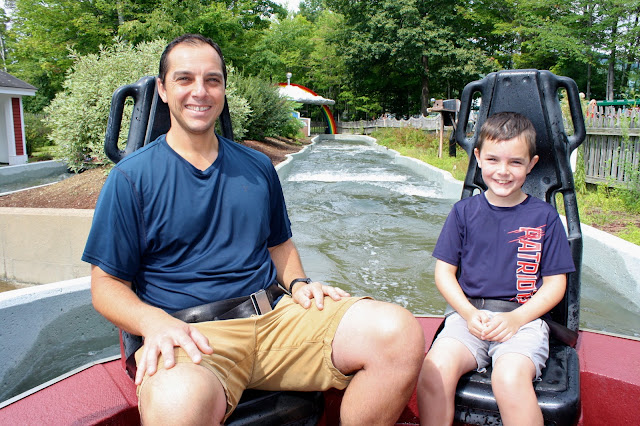 We rode the geyser ride as a family, which is always thrilling because you never know how wet you'll get.  I was protecting my camera from the water and screaming like a fool every time we got sprayed. 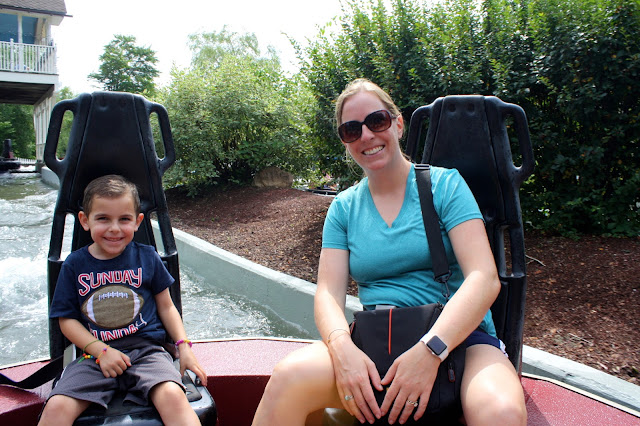 Xander and Declan took off to ride the Polar Coaster next, so I hung with Brendan and he ate an early lunch in the stroller we had rented.  I highly recommend renting the stroller because the kids get all wet on certain rides, and you won't have to leave the park with a soaked stroller. All throughout Story Land, there are fun and cute things to do, like "milking" the cow, digging with excavators, touching a huge icicle, etc.  There are also plenty of bathrooms and places for nursing mamas and resting babies, and you can bring in your own food so it's perfectly family friendly! 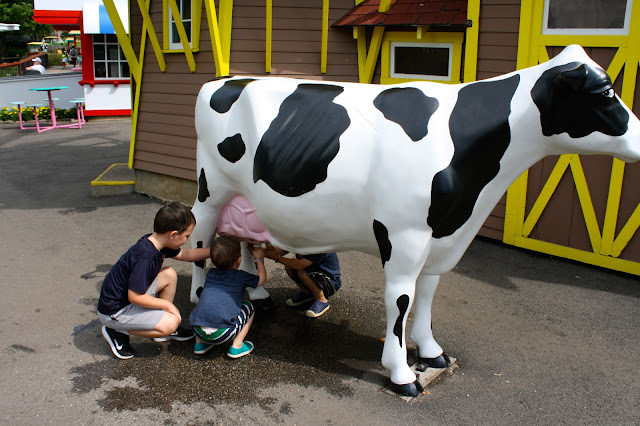 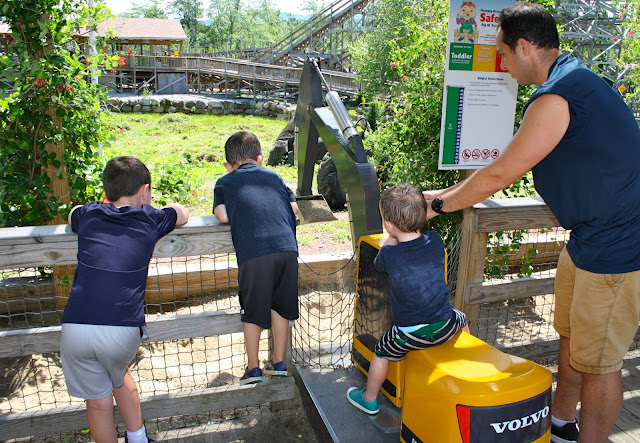 When we needed a break from the sun (and to let our food digest) we headed to the ball place.  They could have played for hours in here! 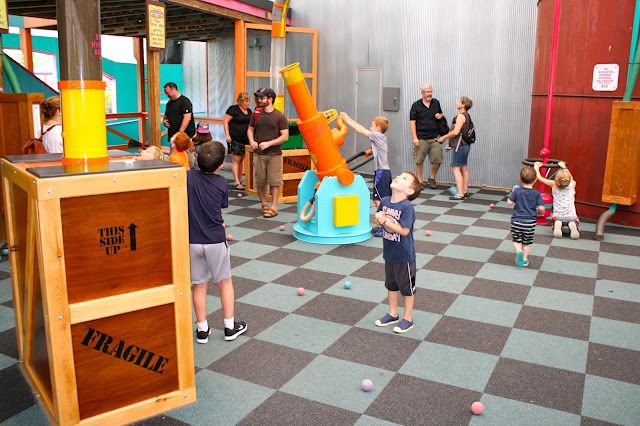 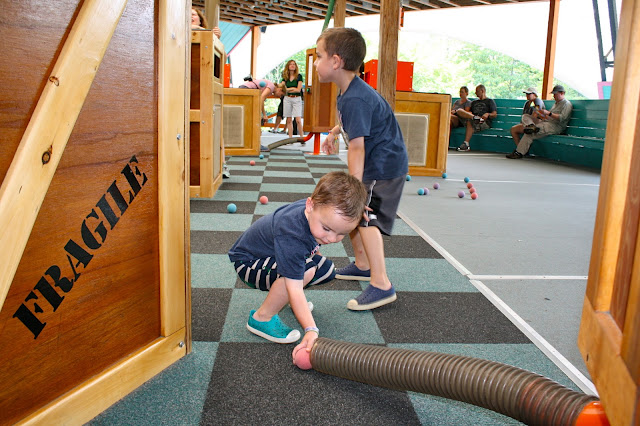 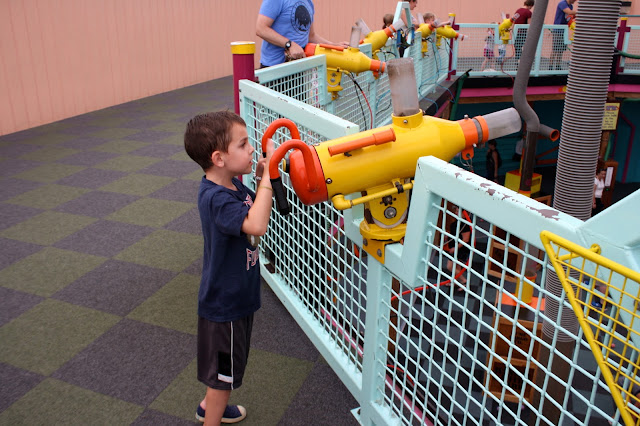 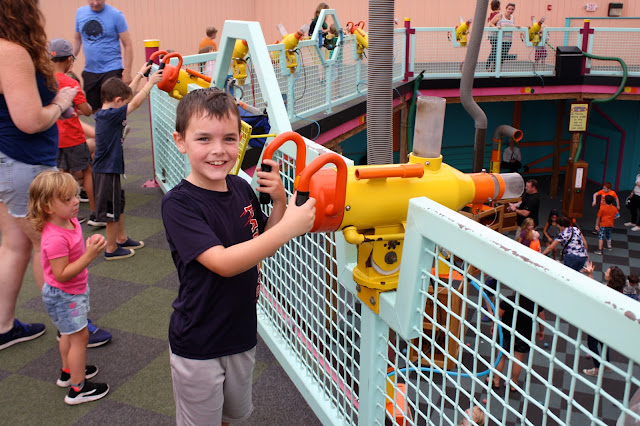 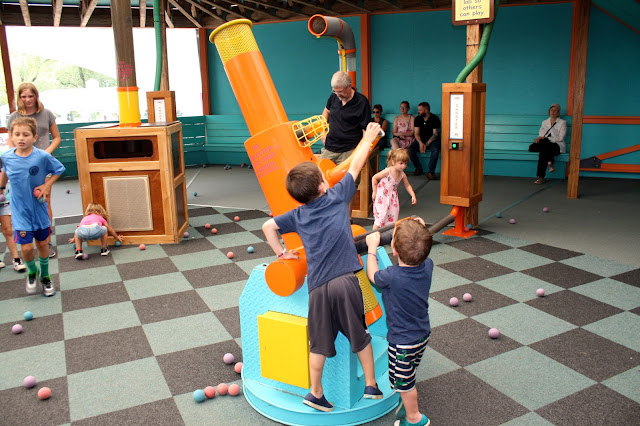 There are a bunch of shows happening throughout the day, and we were able to catch this very funny magic show. 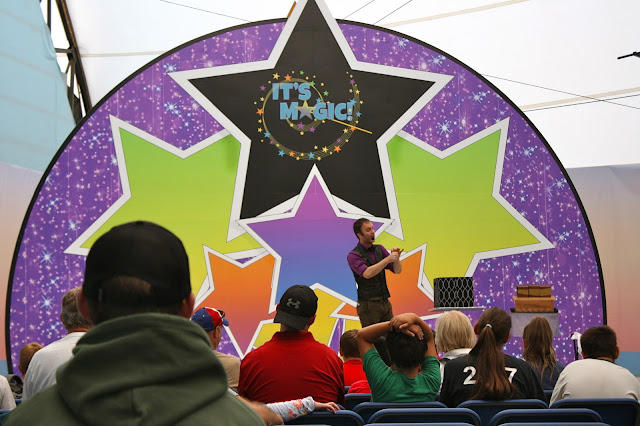 Everybody enjoying the air conditioning and needing the rest! 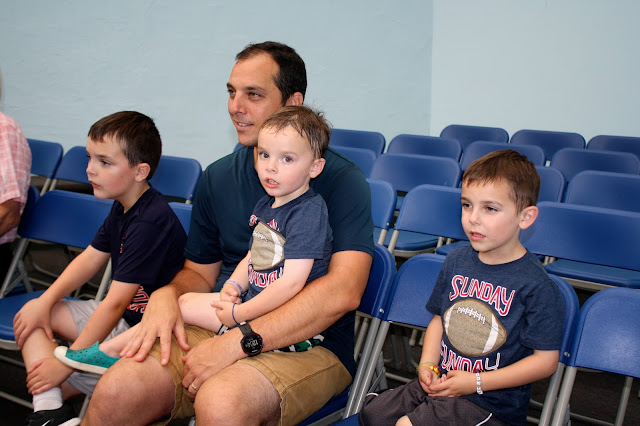 The Pharaoh ride has water shooters for the riders, and also all around the ride for onlookers to spray the riders.  You can't get go near this place without getting wet. 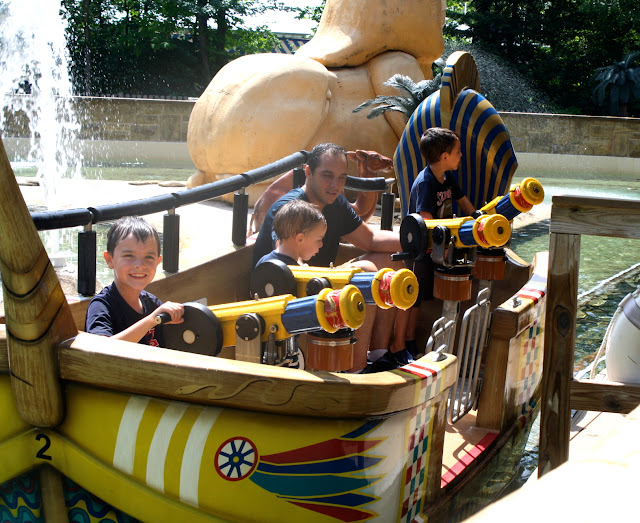 New (to us anyway) was this Safari Ride through the forest where you find dinosaurs and other hidden items.  Brendan made me take a photo of every dino, but I'll spare you and only post one :) 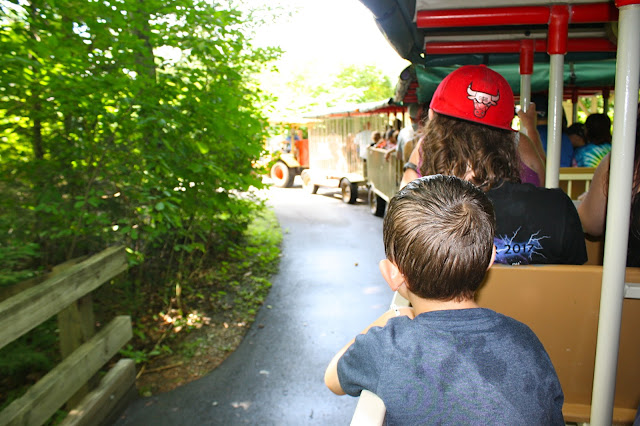 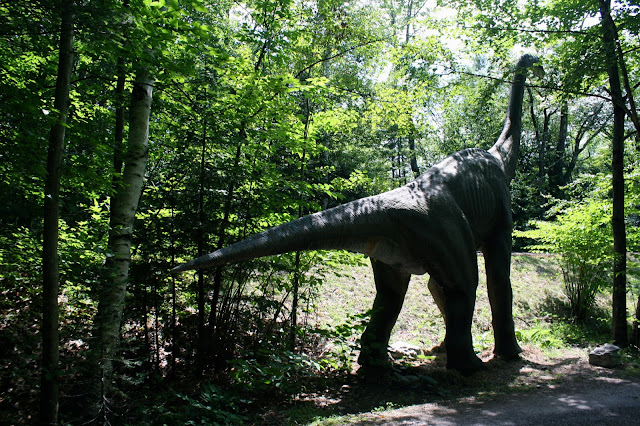 There is also a train ride that goes all around the park with multiple stops.  It was Brendan's favorite "ride" and we stayed on it for awhile!  Then we headed over to this splash park area... 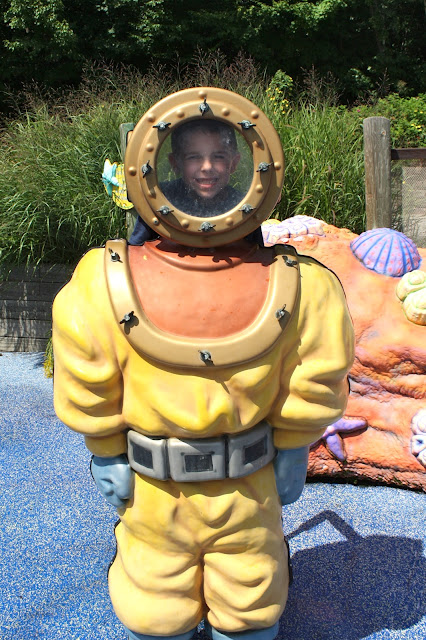 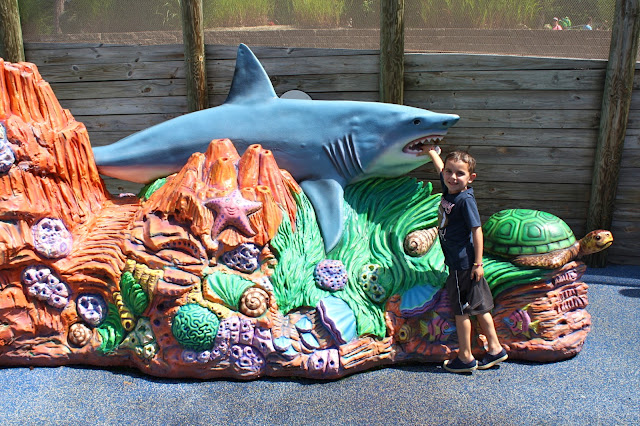 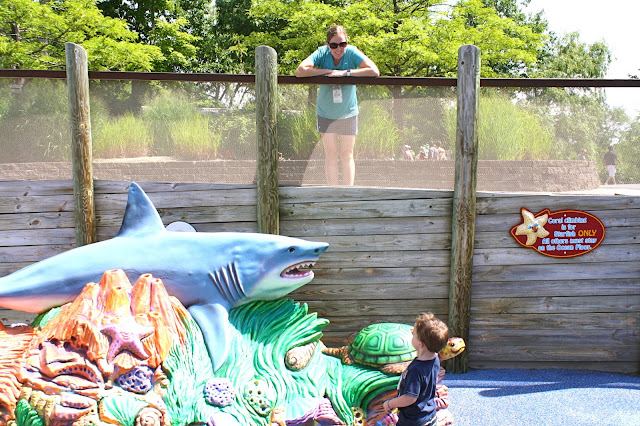 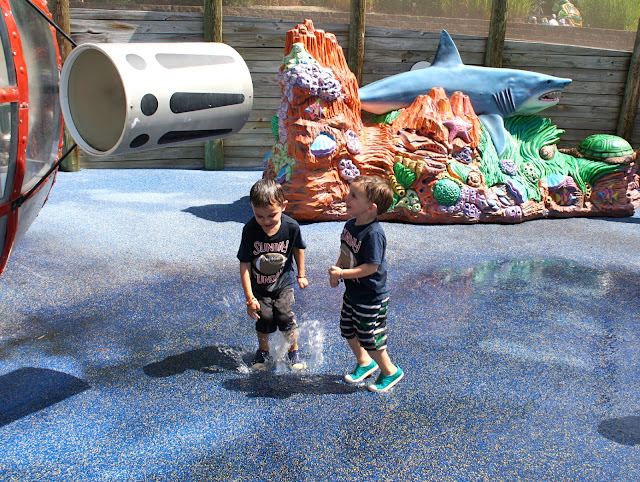 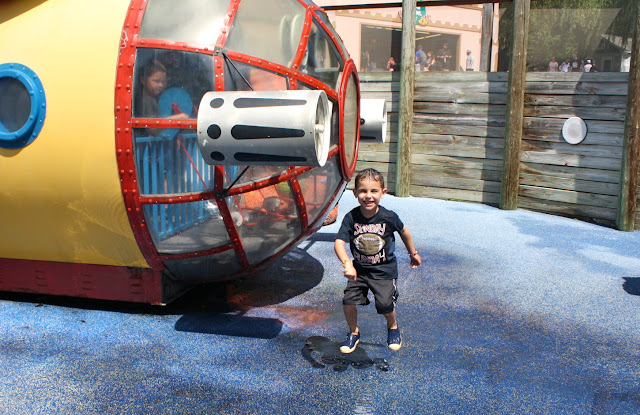 Our last stop was the storybook area of the park.  They have a cool tree playground, The Old Lady in the Shoe, The Three Little Bears house (Declan's favorite) and every other storybook character you can imagine. 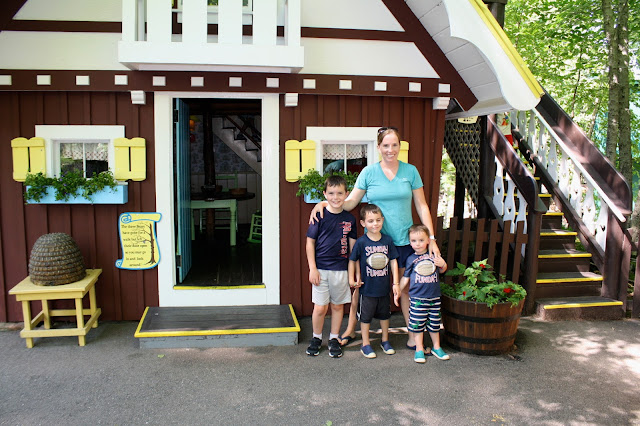 We had such a fun day together with our youngins at Story Land, and if we had timed it better, they have a deal where you can enter the park during the last three hours of the day and receive a ticket to come back another whole day.  Our family just loves visiting Story Land, where family memories are made, and hopefully we will be back again next year!  If YOU want to visit Story Land, use code "BlogReader19" for a $9 savings per ticket! 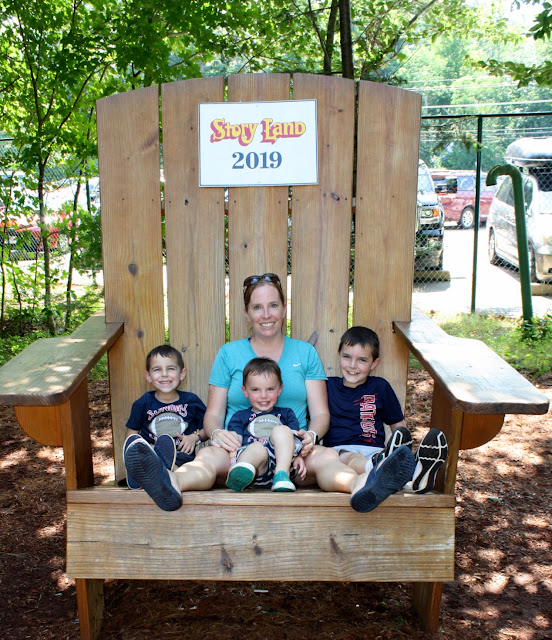 Thank you Story Land for letting us come play and review your awesome park :)
"Thunk" by Colleen