A Trip Down Memory Lane: 7 Dating Stories on This Valentine's Day

When Phil and I first met, in Austria in January 2000, I was dating a boy from home.  I told Phil about him pretty quickly, and didn't think much of it, as Phil and I were friends but I didn't think there were any romantic feelings involved.  A few days later, I heard myself telling my roommate that I wanted to marry a guy like Phil.  It shocked me, as the guy I was dating was very unlike Phil.  I realized that I had to break up with him, because if he was not marriage material, then what was I doing?  So I did, by phone, because I was in Austria and he was in college in Maine (one of my biggest regrets in life was ending a 3 year relationship over the phone - mea culpa).  I definitely hoped deep down that something would develop with Phil, and I made sure he knew that I was now single.  Phil's a shy guy, and there was a Valentine's dance coming up, so my roommate and I hatched a plan to get Phil to ask me.  We would have another guy friend ask her in front of Phil and I, and she would say "Well, I don't want to go if Colleen doesn't go" and then Phil would have the opportunity to jump in and ask me.  It worked like a charm!  (Ummm, after typing this out I'm not sure if Phil even knows he was tricked into asking me to the dance?  Sorry Phil!)  He did bring me a dozen red roses before the dance (he didn't know that red roses = love but all the girls did!) so I'm pretty sure he wanted to go with me ;)

The One Where I Fall in Love with His Goodness

So here's the thing about Phil...he's just a GOOD guy.  Like to the bone GOOD.  He was friendly with everyone, and always willing to lend a helping hand.  He was the perfect gentleman, without any flaws (that I could see) and he loved the Lord.  He lived his faith on his sleeve, or should I say, all over his body.  He wore a chain around his wrist signifying his consecration to Mary, he wore a scapular around his neck, he carried a purity card in his wallet.  He invited me to pray the rosary with him, come to Mass with him, and praise the Lord together.  He was a Theology major who wanted to teach college one day.  But he wasn't like a know-it-all kind of guy.  Even though he did seemingly know-it-all, he always acted so kind and humble.  One particular day, after praying the rosary together, I left thinking "I could listen to him pray the rosary for the rest of my life".  I fell in love with his soul that day.

The One Where He Nearly Kills Me

Phil and I went skiing a few times while in Europe.  He had never skiied and I had been going since the age of four, so of course I wanted to teach him/show off my skills.  We went up this huge moutain in the alps, and we were on T-bars going up.  Those are basically like metal T shaped bars that ski you up the mountain.  In my memory, there was never a designated place to get off, though I'm sure we could have just skiied out of the T-bar anytime we wanted.  But no, we rode it all the way to the top of what was scarier than any Black Diamond I had ever seen.  I went first, showing Phil how to do slow, wide turns back and forth.  I stopped a little way down the mountain and turned around to watch him go.  Phil started skiing and just beelined it straight for me.  It was like a slow motion scene...I could see him skiing right towards me, and knew he would collide with me, but I couldn't move.  And we did collide, but we didn't fall.  Instead we were both speeding straight down this huge mountain with nobody around.  I truly, literally, thought I was going to die.  From what, I'm not sure, but I was so terrified speeding down the mountain just knowing it couldn't end well.  Finally we fell, and tumbled around a bit, and Phil got up, laughing.  Laughing!  Like he was having the time of his life!  I was so mad!  But suddenly, I was laughing too!  Because cheating death is apparently hysterical!  I knew anyone that could nearly kill me, then make me laugh, was my true partner in crime for life.

The One Where I Trick Him Into Thinking I'm Suzy Homemaker

One day, I notice that Phil's favorite shirt is missing a button.  I tell him that I can sew it back on for him, ready to show my nurturing side.  I gather all the items necessary, and sew the button on his shirt.  He is majorly impressed.  As was I.  For I had never sewed before, and I never sewed again.

The One Where He Makes Me Trust Him

Phil and I were apart the summer between my junior and senior years of college.  I was at home on Cape Cod, and he was at home in Maryland.  We would call each other every night and write letters back and forth.  It was a hard time, but very sweet and romantic as well.  Phil came up to visit a few times that summer, and one day we took the ferry to Nantucket.  Phil wanted to rent a scooter to see the island, and it was cheaper to rent one two-person scooter than two one-person scooters.  So we get on the scooter, with him driving and me behind, and I got very nervous.  He had never driven a scooter before!  I had never ridden a scooter before!  We didn't know where we were going!  He totally calmed me down, and drove us around the island with ease, and it was the first time I can remember letting somebody else take charge.  I am a Type A personality, and don't like when I'm not in control, but Phil respectfully took control, and I learned to trust him completely.

After our second kiss, Phil says to me "Since we can only kiss until we are married...we better take it slow."  Since we had only kissed twice in three weeks of dating, I wasn't sure how much slower we could take it, but I nodded in agreement, happy to let him lead us in this area.  Is there anything more swoon-worthy than a guy trying to get a girl to Heaven?  Methinks not.  The topic arose again when we decided to visit Brugges, Belgium one weekend.  Our friends whom we had always travelled with decided to visit another country, but I was desperate to go to Brugges after hearing how beautiful it was (and it REALLY was!) and Phil said he would come with me.  This was the only time we had travelled by ourselves, and while it was exciting to have the time together, we both had guilty consciences about it.  We didn't want to cause scandal, and figured we would stay in a big hostel with other people, and it would all be kosher.  But when we arrived, we only found hotels (back before cell phones and internet access at our fingertips) and so we had to get a room for the night.  The man at the desk said in broken english, one room or two?  And we said one, being the poor college kids we were, and then he asked us "One bed or two?" and Phil yells out "Two!  Two Beds!" while we both blushed innocently.  When we got to the room, we decided that we were not allowed to kiss in the room.  Ha!  I love that chaste man.

The One Where He Defends Himself

This might be my favorite dating memory of all time...though writing out these seven has made me think of so many more.  Phil was a big ultimate frisbee player in college.  Like huge.  He played in the intramural league on campus, was always playing frisbee golf with his friends, and when he was not working or studying, was throwing a disc around.  He loved it, and taught me to play-ish.  I didn't have the same skill for it that he had.  But I'm not exaggerating when I say he was one of the top frisbee players on campus.  He was really good.  I loved watching him play.  One night, he was playing a tough game, and the frisbee was up in the air, and both he and a taller opposing player went up for it at the same time.  The opposing player tried to push Phil down to get the frisbee, but Phil still caught it as he was falling.  Then Phil got up...brushed himself off...walked right up to that guy's face...and just stood his ground.  You know, that confrontation thing men do when they're about to fight?  Like this: 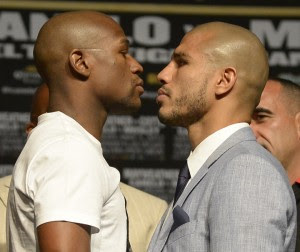 I could have swooned to my death right there.  Just a little puddle of swoon.  It was soooooo electrifying to watch him approach that other player as if he was gonna punch him in the face.  I loved it, and still get all giddy when I think about it.  I knew that watching him defend himself, he would always defend me and our future family.  Nobody was pushing him around!

And sadly, that's a wrap.  I could go on all day, but maybe I'll make it a Valentine's Day post each year.  I loved looking through these photos and remembering the good old days.  Lucky for me, the days are still good, because I've still got the same Valentine I danced with 20 years ago today.  I love you Phil, forever and always!  Happy Valentine's Day everybody!