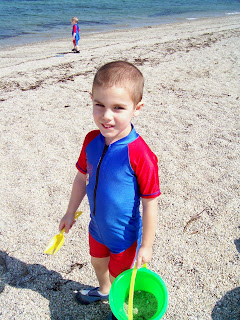 This summer has been a hard one for our second child, Andrew. It seemed that no matter what we did, he was always bored or not having any fun. There were some occasions when he would spontaneously announce that this was "the best day ever", so that was nice.

To be fair, Andrew does have a hard roll to play in this family, being the middle of three boys. He wants to do everything that John-Paul does, but he still needs to take daily naps like Eamon. I think he is trying to find his own space.

He is definitely our most cuddly boy, he loves to sit on my lap at Mass, and still sleeps with his blanket and sucks his thumb. Although in these ways he still acts young, he is also probably our bravest boy at the moment, willing to talk to anyone and ask for what he wants. But watch out if he doesn't get what he wants, because he'll readily tell you that he's not going to be friends with you anymore.

I think the way that Andrew has matured the most over this summer is in his speech and his ability to communicate his emotions. He'll tell you when he's feeling frustrated or very happy or wicked excited. And he thinks before he speaks because he prefaces a lot of his sentences with "This is gonna be bad...." or "This is such good news.....".

Andrew, you're going on four years old, you're adorable, we love you and are so proud of you.
"Thunk" by Colleen