{Warning - mushy mom post ahead.  I never want to come across as bragging about my kids, and trust me, they all have things I don't want the world to know about them, but every once in a while, I need to record some of their personal achievements.  This blog is called Martin Family Moments, and I want to remember our best moments.  Thanks for understanding!}

Oh my gosh y'all, Eamon is so adorably cute and nice and fun and holy right now.  (If anyone knows how to freeze a 12 year old boy, send instructions STAT!)  This week, Eamon's basketball team won the Boys C Championship.  Boys C is grades 4-6, and Eamon is in grade 6, and a true leader on the team.

I didn't know until this year, that he shoots hoops every morning for half an hour before school (in extended care) to work on his shot.  And he can almost always be found with a basketball in his hand.  He brings it to school, he brings it home from school, he brings it inside to protect it from the elements...just trust me when I say the ball is stuck to his hand.


One time he was running late for a game this season, and the coach said to him "What are you trying to do...give me a heart attack?"  He's such a little guy, but plays point guard with a passion.  Although he plays every minute of every game (unless they're winning by a lot) and he handles the ball all over the court, he is not a ball hog in the least.  In fact, sometimes I think he shares the ball too much when he should be taking more shots, but that's not his style.  He is always smiling on the court, never cops an attitude, and looks at his coach like a little puppy, nodding along and doing everything he says.  It's just such a pleasure to watch him play and lead his team to victory!  The team they played against seemed dominant, and they lost to them the last game, so the championship game was going to be tough to win (I admit, I thought they would lose for sure) but Eamon was so positive about their chance to win and just kept saying "I know we can beat them if we play our best!"

At half time the score was 10-2 and we were losing.  Somehow, we came back, slowly but surely, and were down by 2 with 18 seconds left.  We got to the hoop and scored on the third attempt!  The game went into overtime!  Everybody went crazy! 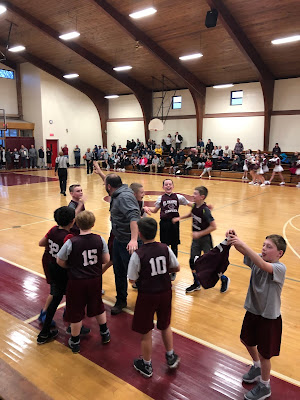 The other team scored the first point in a foul shot, then Eamon scored a basket and we were up by 1.  The game played on, and with 7 seconds to go, Eamon got fouled and made BOTH of his shots to win the game.  The crowd went wild again, and he was smiling so big!!  Pure joy for my basketball loving boy.

But what makes me love him even more, are the following stories:

Last year, a new kid came into their class and on the first day, he spilled his colored pencils all over the floor.  The kid's mom was so eager to tell me that it was Eamon who quickly swept in and helped him clean up while making a joke about it.  The mom told me how welcomed Eamon made her son feel.  They've been good friends ever since.

As a family, we give up sweets for Lent each year.  Eamon always goes a step further and gives up something additional.  This year he gave up all drinks except milk and water.  One night, after a particularly hard game, my parents were driving Eamon home and wanted to stop and get him a shake to celebrate, he declined sweetly, saying he couldn't because it was Lent.  My mom literally started crying.

On the night of the big championship win, after he showered and got into pjs, I asked him what he wanted to eat as a snack.  I offered him his favorite (a bagel and cream cheese) as well as coffee milk.  He sweetly reminded me that he couldn't have coffee milk, just plain milk, and I said "But it's your championship win!"  He declined again.  "But it's the eve of the Feast of St. Joseph!" I replied.  "Then I'll have it tomorrow" he answered with a smile.  That kid is so holy!!  And his mother is such an Eve!

Finally, Phil emailed the coach to say thank you, and the coach replied:

It was my pleasure.  Relatively easy coaching the best player in the league, especially when that kid happens to be just an overall outstanding person and teammate.

With  three minutes left and down by six in last night's game, he politely pointed out who had not played during a timeout.  To me, you do not need to know much more about what kind of kid he is.  He reminds me of another one of my favorite players a couple years ago in a game he tried to get someone the ball (who hadn't scored all season) 14 times in a row.  Weird both those kids have Martin as a last name!  You have raised two outstanding kids, glad Eamon is a CYO champion he deserves it!

And his mom started ugly crying.

I mean, come on.  These are the things that really matter!!!

Eamon is the kid who barely ever has a temper tantrum, always answers "Yes, mom" and "Yes, dad", says grace quietly by himself before each meal, thanks me for every meal, thanks me for driving him somewhere, always wants to play with his Dad and brothers, NEVER asks for anything from the store, is a model student, and still gives me hugs.  He was the hardest baby but is probably our easiest, happiest child.  He's just the cutest little peanut and while I hope he gets as tall as his basketball heart desires, I must admit, I love him just the way he is right now.  I am so thankful to God for my holy, kind, funny, white-cheddar-cheezeit-groove-loving Eamon.  He may be a middle child but he's never forgotten.

Eamon, I know we don't deserve a son like you, but we are so grateful for the gift. 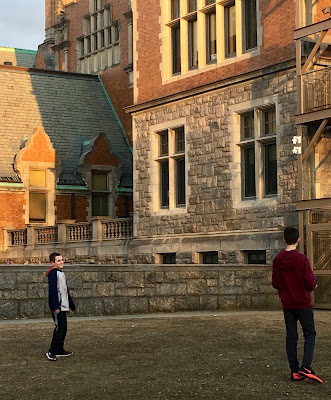