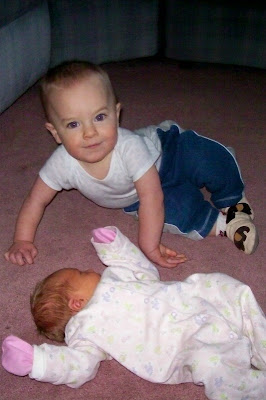 Just the other day, Maggie turned 14 months old. Not a major milestone, no parties, no gifts, but it is kind of a big deal. Because I realized that when Eamon was 14 months old, I gave birth to Maggie.

Now, thinking about my beautiful Maggie and how crazy she can be, I couldn't IMAGINE having a newborn to look after as well.

I honestly can't believe that I had my third and fourth babies only 14 months apart. I remember trying to give Eamon his bottle of milk before nap time while nursing Maggie. I recall trying to time naps so that I could have at least ten minutes in the day when I wasn't holding someone, feeding someone, or changing someone.

I can't believe Phil and I were up all hours of the night because not only was newborn Maggie waking up, but toddler Eamon as well. He didn't sleep through the night until he was 17 months old. I remember being dead tired, walking around in a foggy state of mind, and just trying to make it through each day.

Phil and I would fantasize about the day that all of our children slept through the night. We hoped that one day, we would only have one child in diapers. We tried to hold onto the idea of going to a park or playground and having all four kiddos be able to run around and play; no babies in strollers, no bottles and diapers in the bag, and not having to chase shaky toddlers up and down the slides.

Looking back, of course we would never have changed a thing. Because even moving the moment of Maggie's conception a fraction of a second would mean no Maggie. And that's a thought we can not bear. If we hadn't been completely surprised with Maggie, we might never have had a daughter. If Maggie hadn't been born so close in age to Eamon, Eamon might never have learned to be so independent, or to be as loving and protective as he is with her. And I know for a fact that I would never be as patient and trusting as I have become since the second we found out I was pregnant.

I guess what I'm trying to say is that God's plans really are the best. We may not see the end result or the big picture at the time, but everything does happen for a reason, and I'm so glad He has blessed us with these particular little souls in His timing, not mine.
"Thunk" by Colleen