Did you know that women typically speak about 13,000 words a day more than men?  Did you also know that sharing and bonding with friends can improve your health?  So if chatting and sharing tidbits should be a normal female thing to do, then why is it that I get so nervous to write about whatever it is I’m going through?  Is it because it’s in writing and on the Internet?  Is it because I don’t want to be a Debbie Downer?  Is it because I want to portray a more beautiful life than what is my reality?

Yup.  A little of all of that.

But more importantly, it’s because I don’t want to complain about my problems and then get dismissed by my readers who are struggling with so much worse.  I feel like writing about our small crosses could be a slap in the face to someone suffering from a bigger or more difficult cross.

If I say that multiple pregnancies are hard, some could say that infertility is worse.  Dismissed.

If I mention that my baby was up all night with a cold, some could say I’m lucky it’s only a cold.  Dismissed.

If I write about how many hours I spend cooking and cleaning, some could tell me they wish they had a house to clean and money for groceries.  Dismissed. 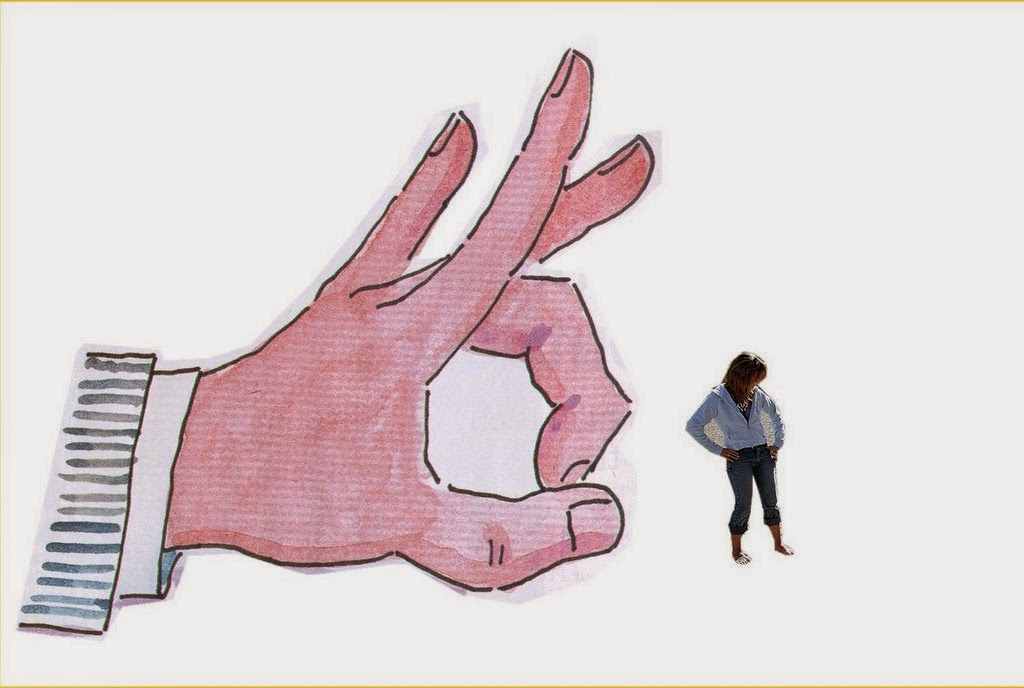 We have all been on the receiving side of this, right?  But probably dismissed a few people’s problems ourselves too…

To the first time mom who is struggling with her baby – “Just wait until you have SIX kids to care for!”

To the neighbor that can’t decide where to go for vacation – “Must be nice!”

To the skinny friend who’s trying to gain weight – “I wish I had your problem!”

I've both ignored people with seemingly lesser problems than me, and also been ignored by others who are in tougher situations than I.  It’s a terrible thing to do, really.  All someone wants is a sympathetic ear, to know someone cares and loves them.

I was taught this lesson recently by my daughter, who is six.  She came home from school, telling me a story about a girl whose sister had gone to the hospital.  The girl was worried for her sister and told Maggie that she was so lonely at night, without her sister in her bedroom, that she cried in bed.  Maggie told her “That is so sad.  I would've cried too.”  I teared up when Maggie told me this tale, because I don’t know if I would have acted so perfectly if I had been in her shoes.

I am more apt to try and solve a problem than just be a good listener who sympathizes.   I might have suggested she sleep with her sister’s stuffed animal, or plugged in a nightlight, or said a special prayer.  All good responses, but that little girl didn't need her problem solved.  She didn't need me to DO anything.  She needed someone to understand her and let her know the way she was feeling was normal.

Maggie didn't belittle her problems, and she taught me a lot with her simple response.  As Jesus said “Come to me, all you who are weary and burdened, and I will give you rest.”  Not just those with specific burdens or only huge concerns, but ALL of us with ALL our problems without comparison.  I’m going to try to be a little more like Jesus....

In the first month of the first year we sent our firstborn son to preschool, he came home saying he wanted a shirt that said "G-A-P" on it because that's what all his buddies had.  He was three and couldn't yet read or know that G-A-P was the name of a store.  He just knew that it was a popular clothing item amongst his classmates and he wanted to fit in.

Our replies to any of their generic complaints until now have been:

~ Every family does things differently.

~ Well, so-and so would probably rather switch places with you and have tons of  siblings instead of the coolest toys.

~ God gave YOU to US to parent and WE are trying to get YOU back to HIM.

~ We do give you an allowance...you are allowed to live in our house and eat our food. 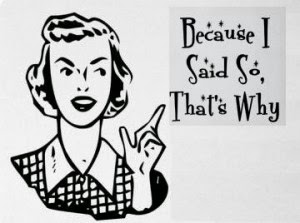 Even though I know in my head we are trying to raise them the best we can, my heart sometimes feels guilty that we do expect a lot from them and don't give them much stuff in return.  They have assigned chores and we have pretty strict rules when it comes to what they can watch/listen to/eat, so we try to do fun family things on the weekends and treat them in inexpensive ways.  Because I'd much rather spend a little extra money making memories than 0.5 % interest.

Recently, John-Paul needed a whole new pack of pens even though school had just started and I had just purchased all his supplies.  He needed them because he lost them, as he is known to do.  To teach him a lesson, I made him buy the new pens himself, and $3.00 later I felt pretty good in the parenting department.

Soon after, Andrew "lost" his black shoes that he wears to serve at Mass.  He is probably our most responsible kid, so this was a rare occurrence.  He searched everywhere for them for days, but no luck.  He told me he needed to buy new ones, and knew that he had to pay for them himself just like John-Paul had to pay for his pens.

In order to be consistent, I took Andrew to the store where I helped him pick out the cheapest option, and $14.00 later I felt pretty guilty.  I didn't even want to make him pay for the shoes, because honestly he needed new ones anyway, and misplacing something is so unusual for him.  But he had seen that The Consequence of losing His Stuff was to buy More Stuff with his own money.  I couldn't exactly back out at that point.

So now I'm left wondering if I did the right thing.  I'm also contemplating giving them an allowance for the first time ever.  I don't want to pay them to do chores that they should be expected to do in order to make our family and home run smoothly, but I also can't expect them to pay for things when they have no means of income.  Phil feels very strongly that we should treat them for being nice and helpful kids instead of  them being nice and helpful in order to get treats.  It's a subtle difference, but an important one.

For now, we are trying to discern what would work best for our kids and would love any input you have to share!  (Why rethink the wheel when you've already been driving it all around??)

When asked if he felt older, he replied "Yeah, a little bit". 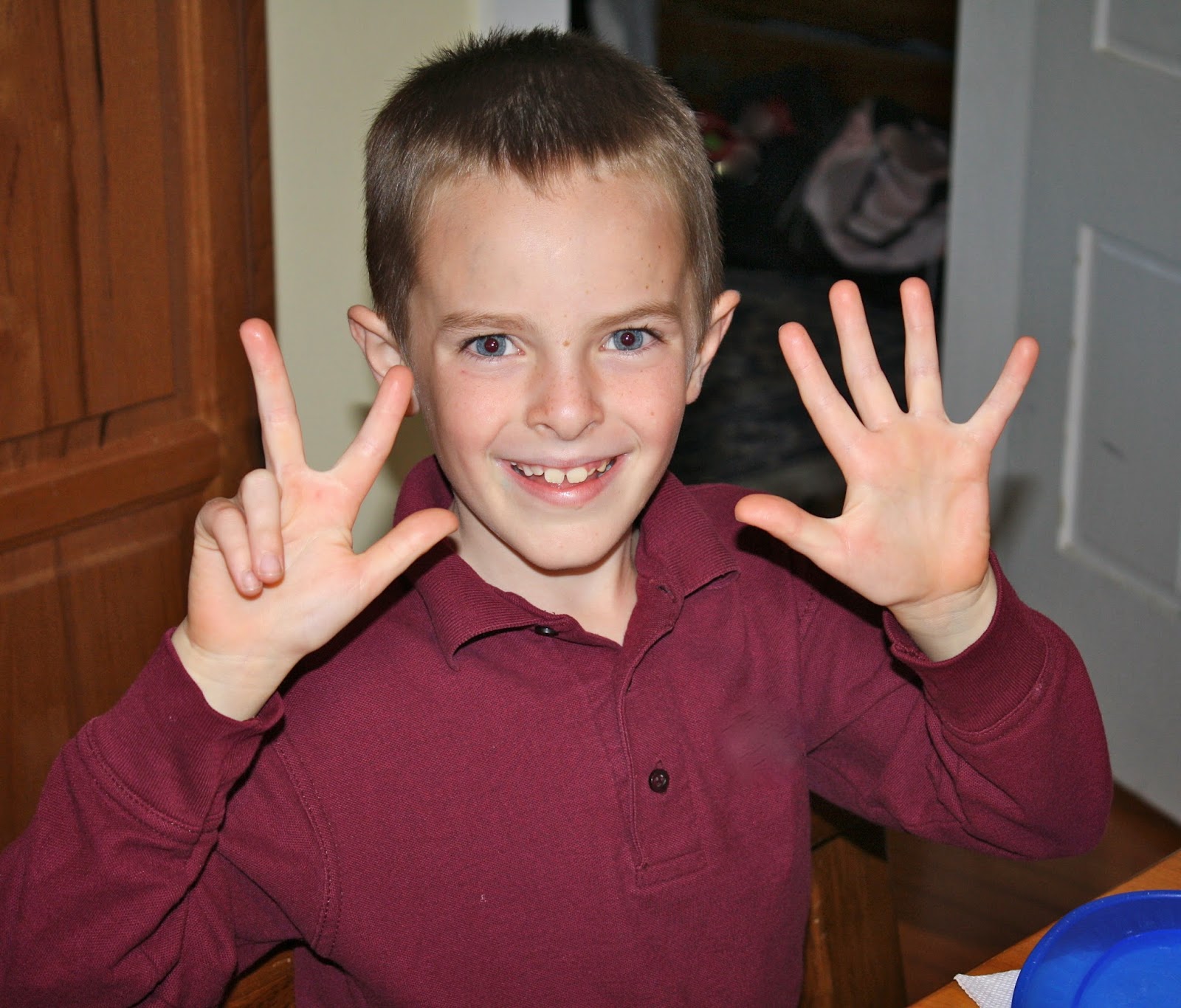 His birthday dinner was the Pizza Hut Dinner Box: 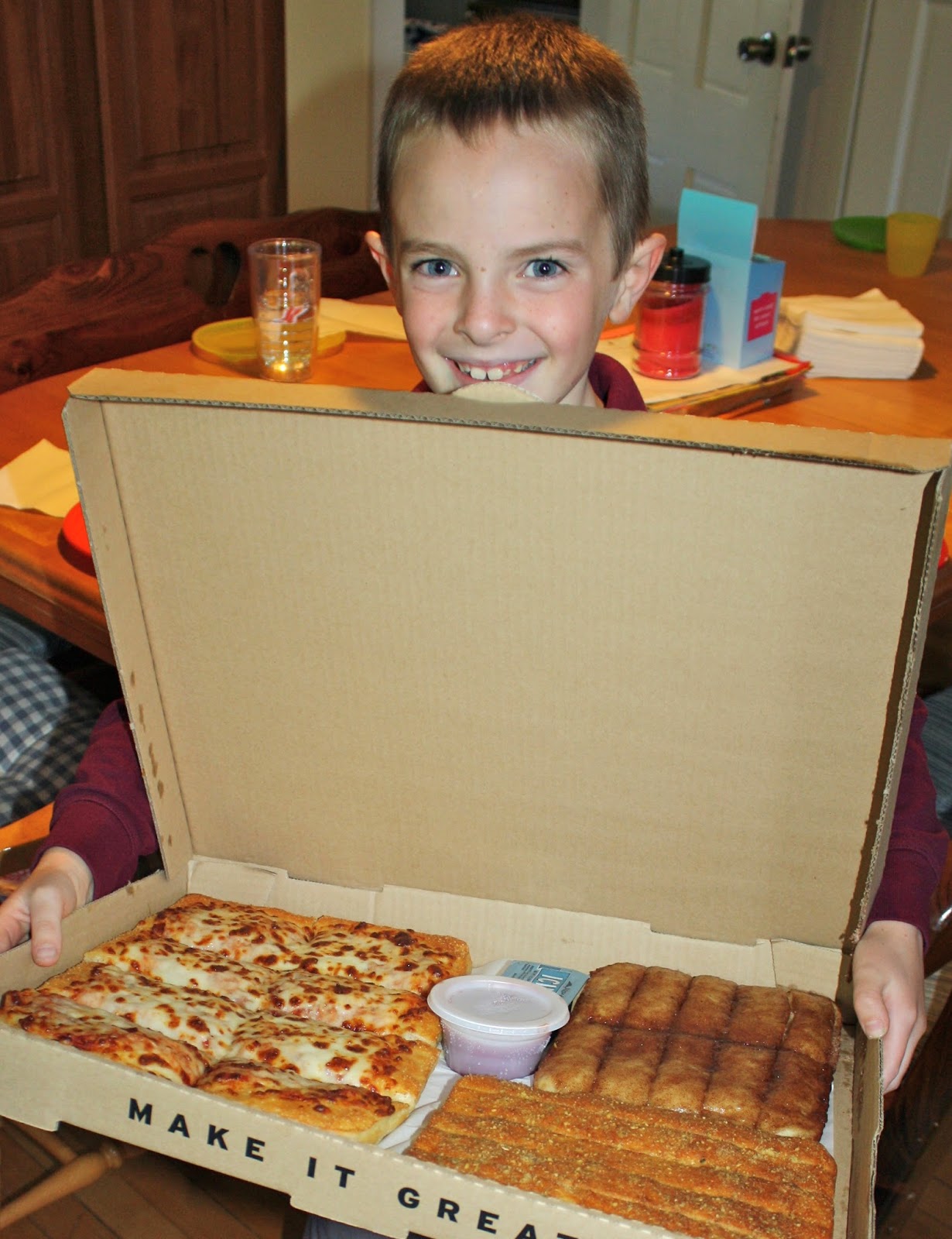 He was dying to open a present and couldn't wait until after the cake, and because he is SUCH a good boy who is often forgotten about (middle child problems) we let him open his best present in between dinner and dessert: 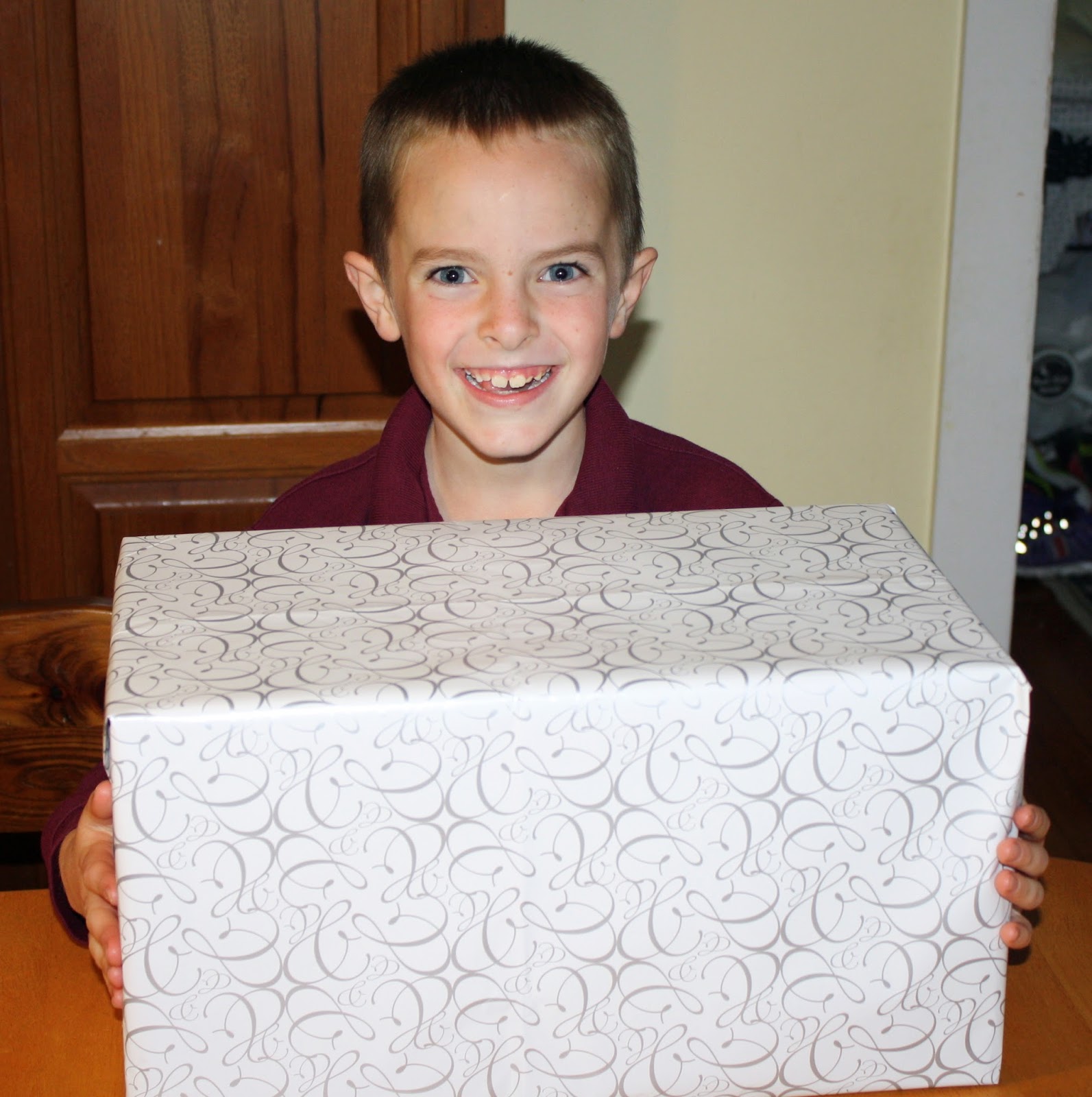 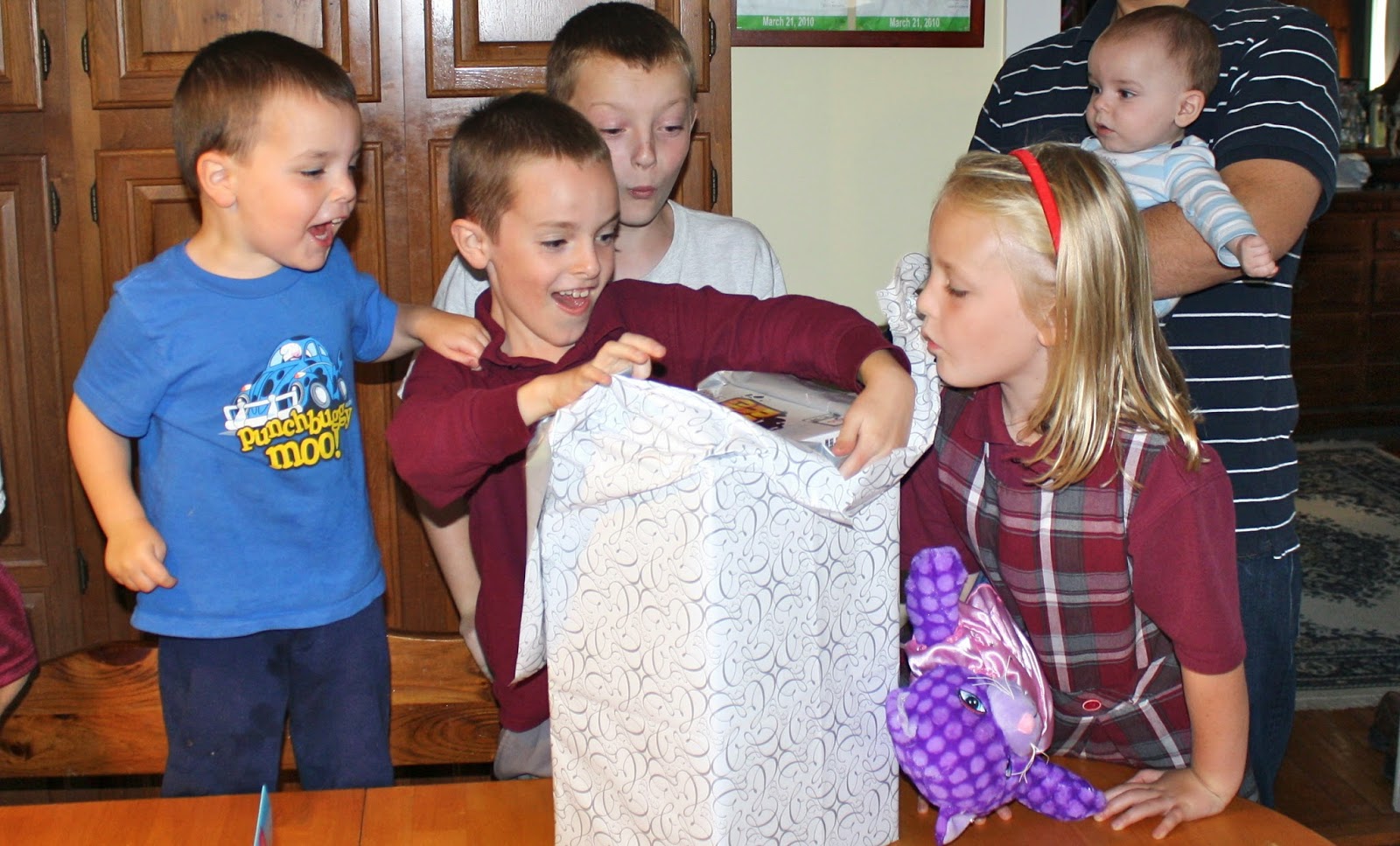 I'm always focused on taking photos of the birthday boy, and then upon review love seeing how all the siblings are delighting in his gifts with him: 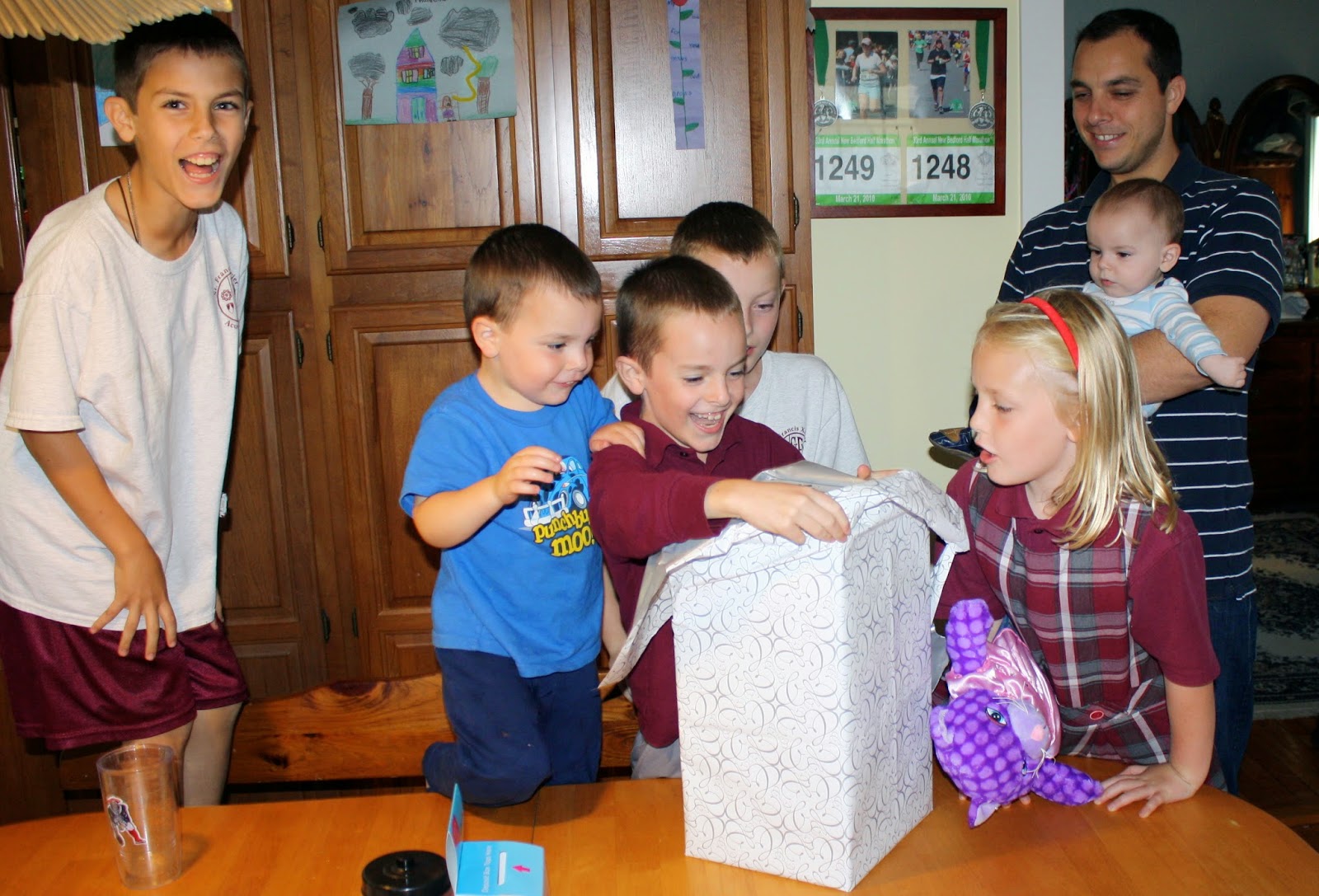 Love these faces...Xander is like "Thank you for my present", Andrew is hysterical, John-Paul is jealous, Eamon is thrilled, Maggie is shocked and Declan is like "WHAT IS HAPPENING?": 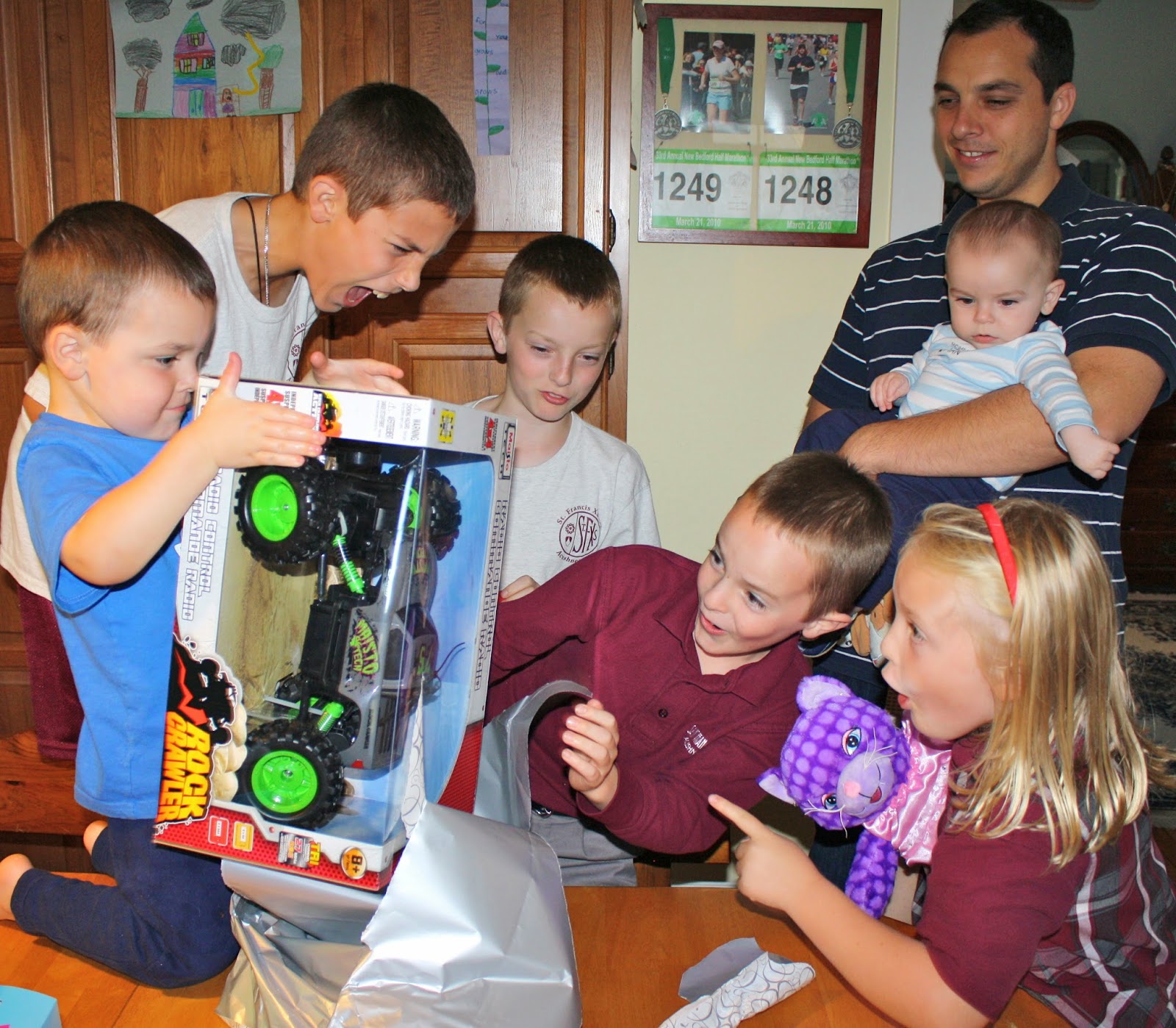 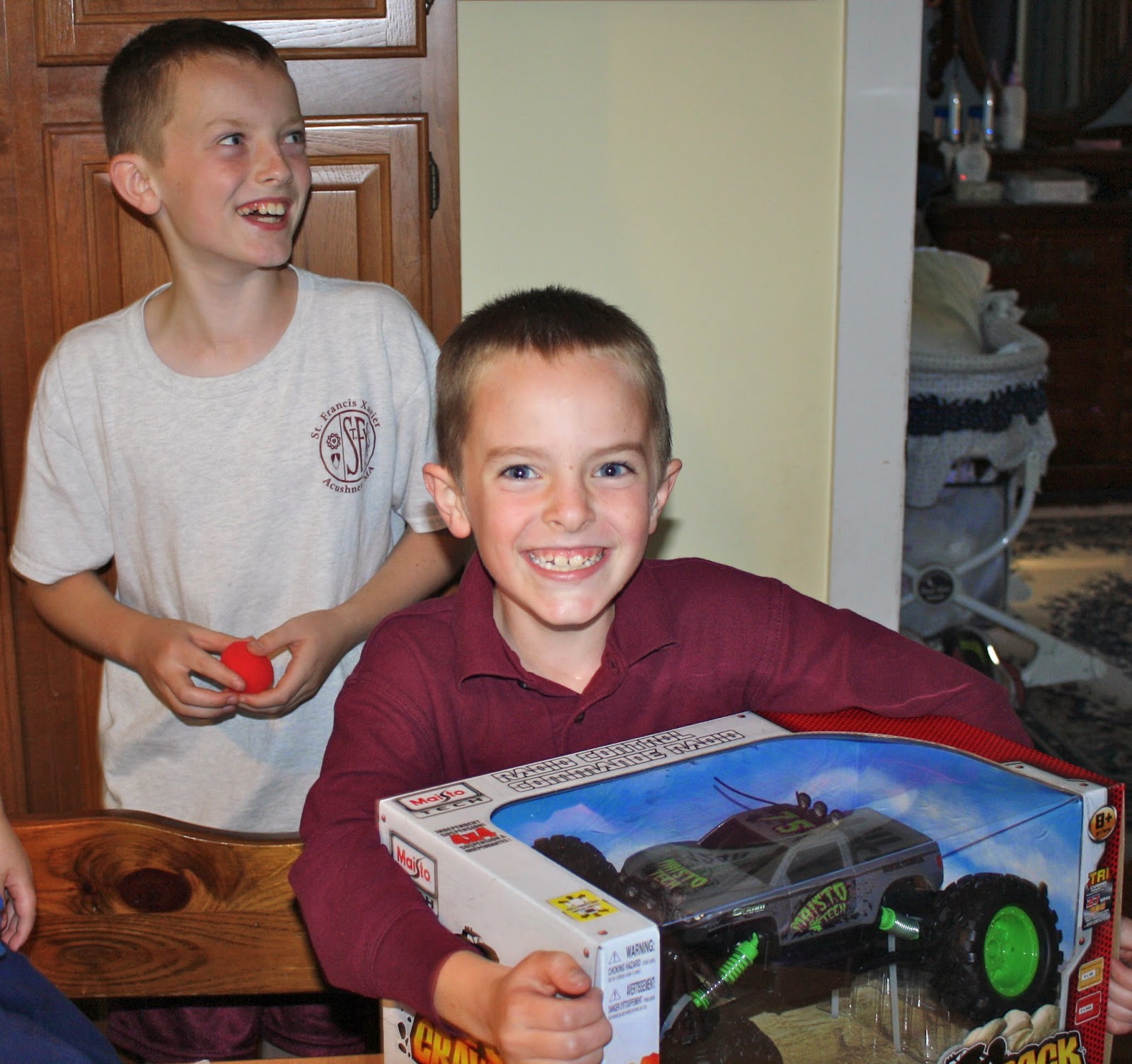 They all ran outside to try it out, and Xander put on Maggie's sneakers in his rush out the door: 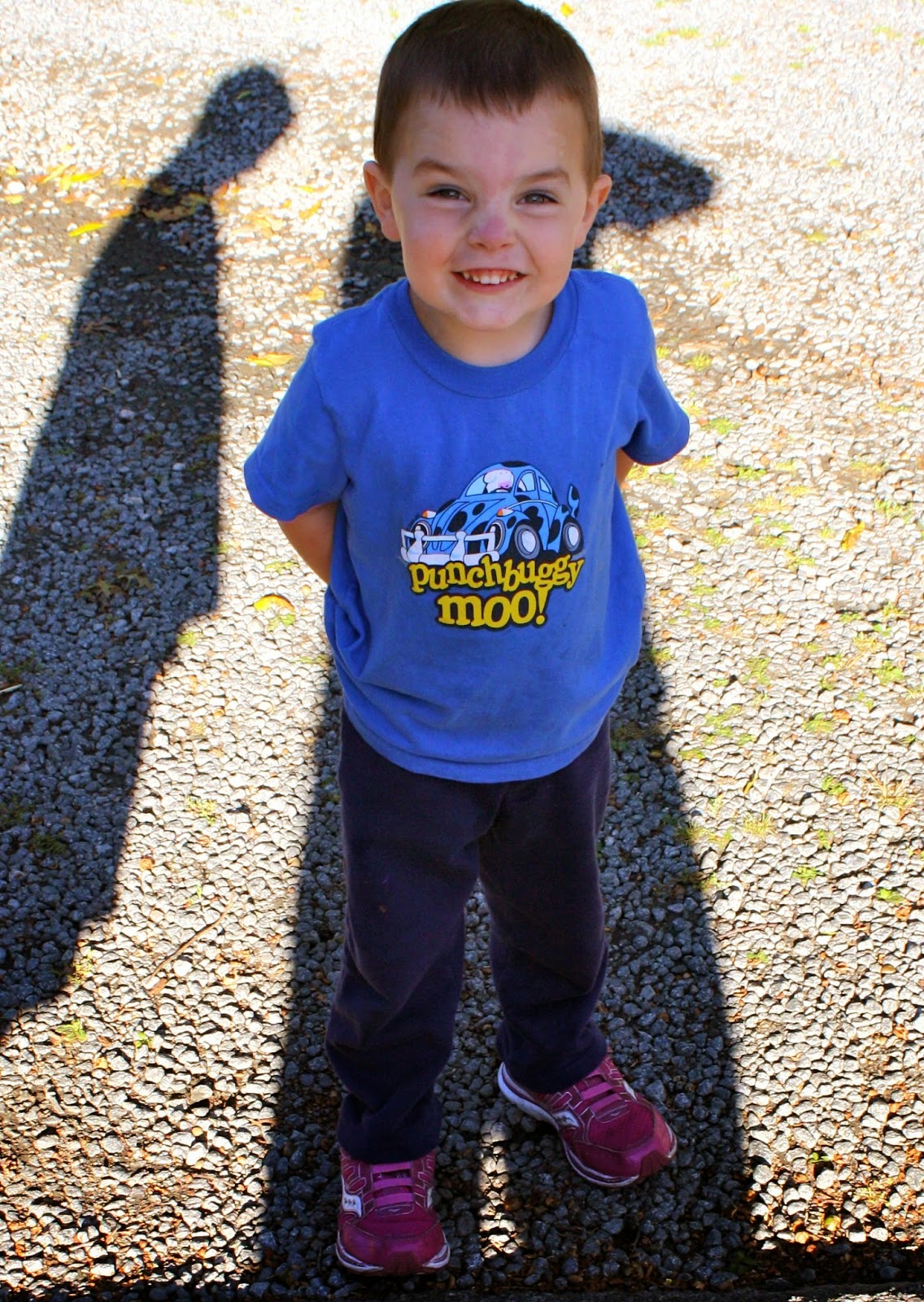 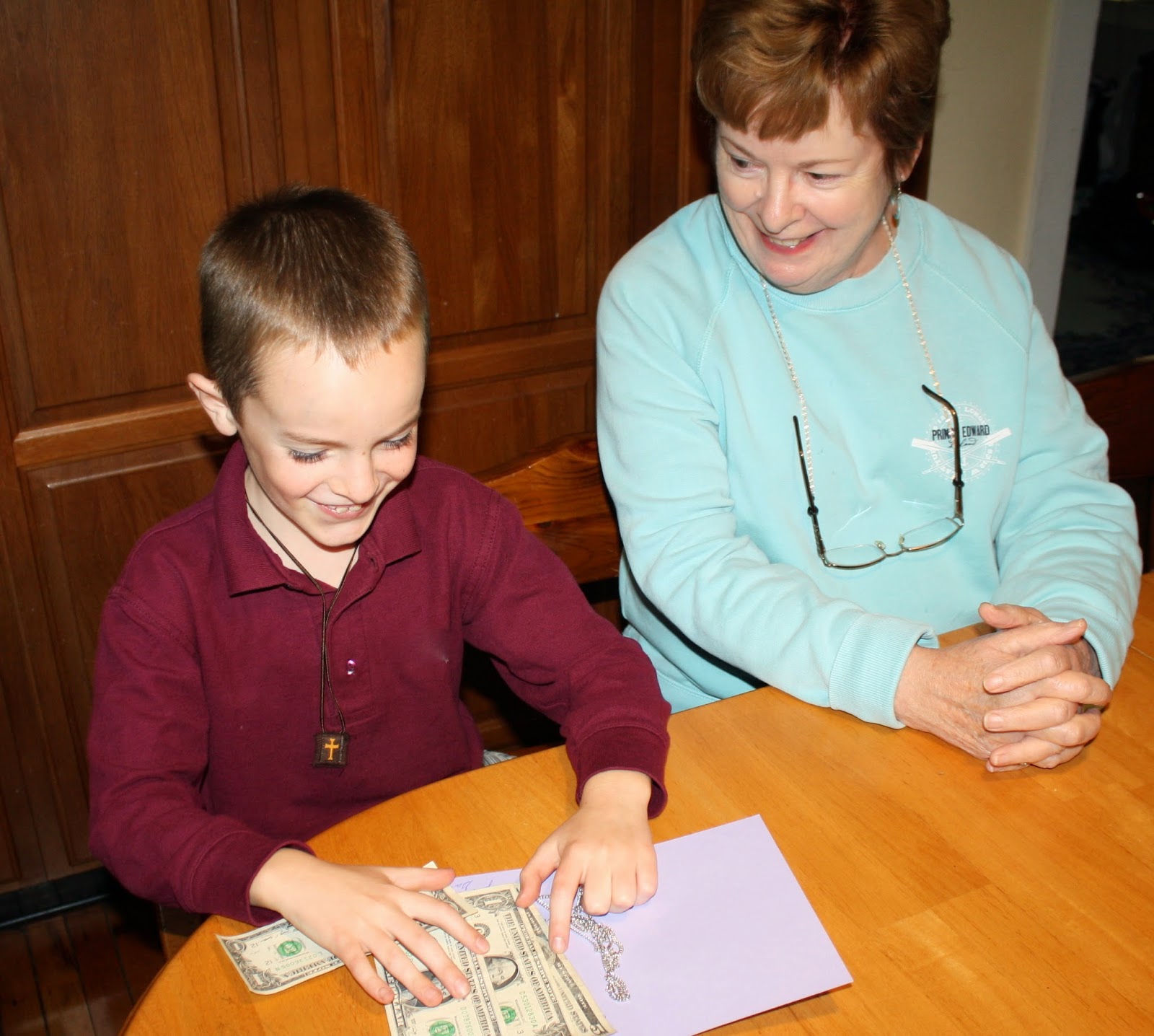 Gammy and Grandpa gave $8 and a miraculous medal, which Eamon had asked for.  He then had it blessed by Monsignor after Mass today, which happened to be Monsignor's 50th birthday. 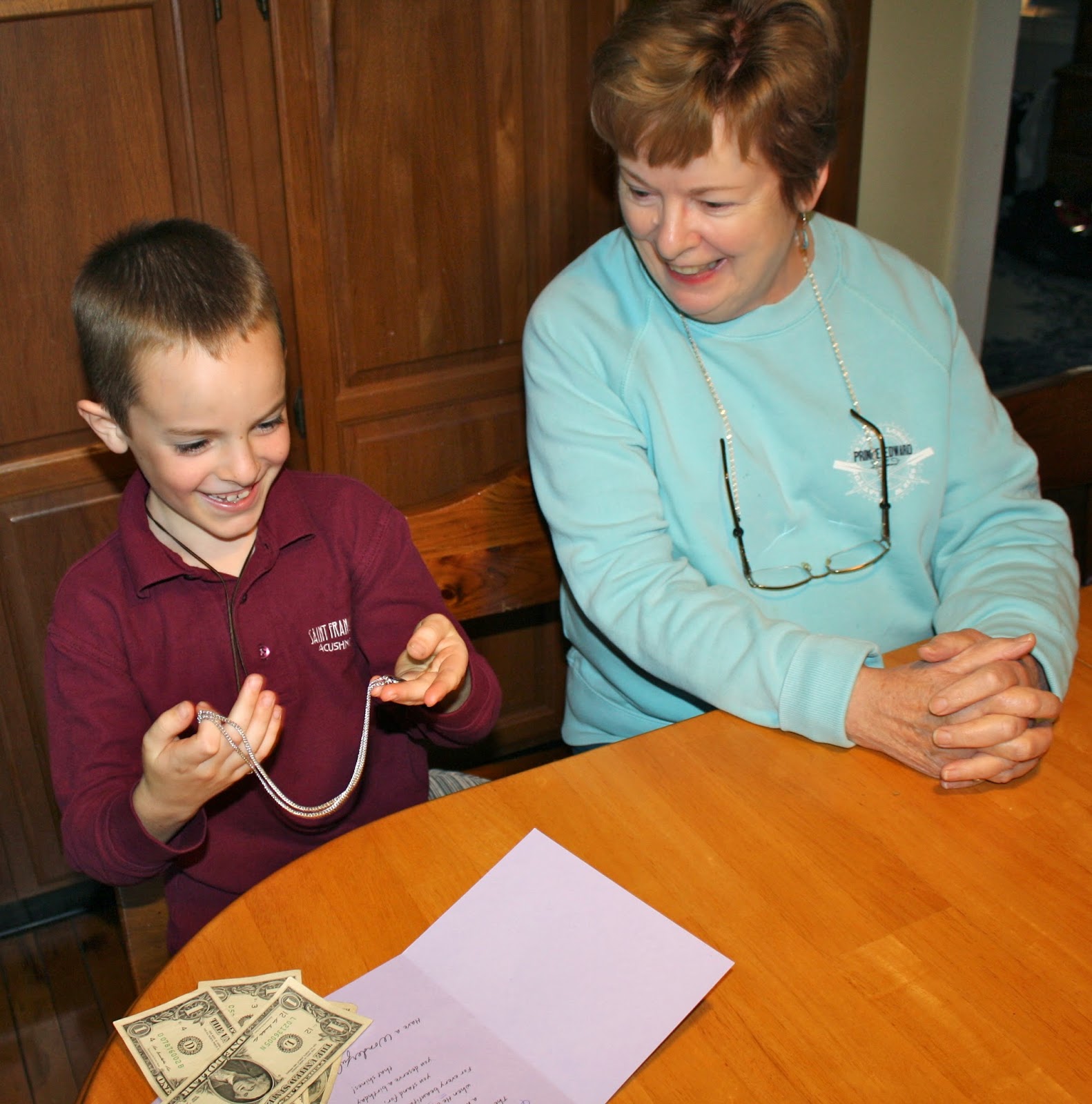 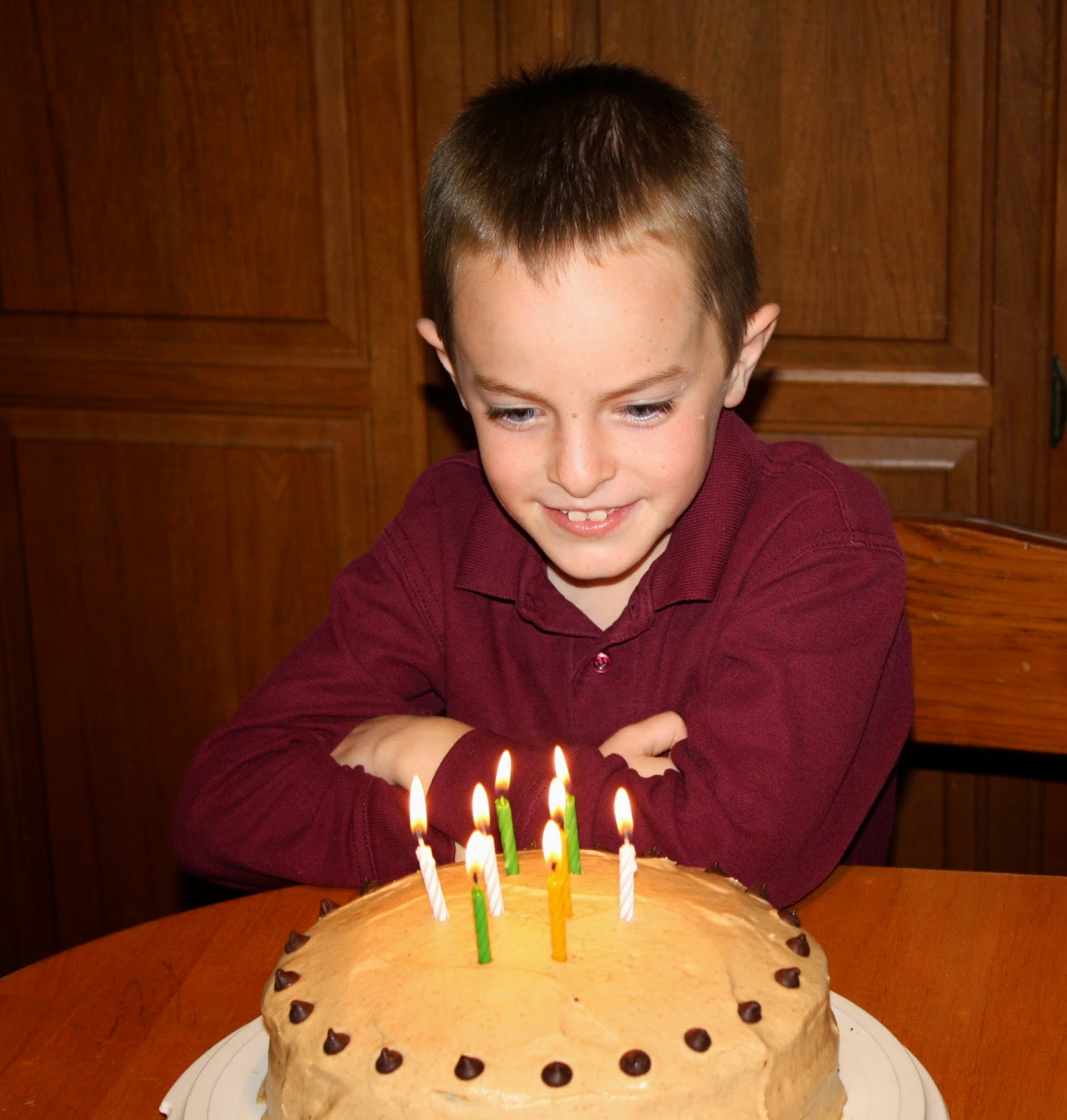 His birthday cake request was "a chocolate cake with coffee frosting and chocolate chips, but not too sweet or Andrew might get a bellyache." 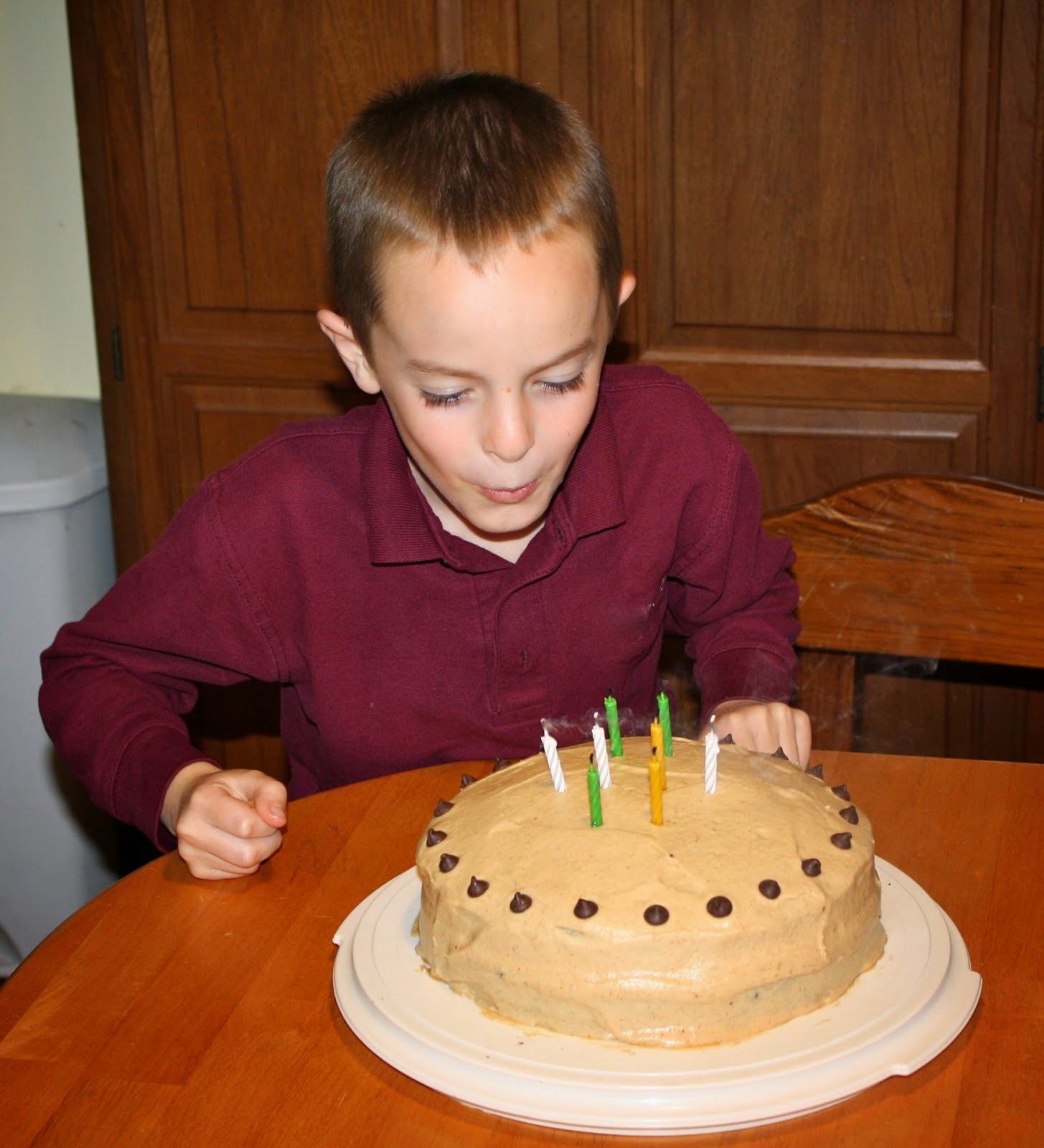 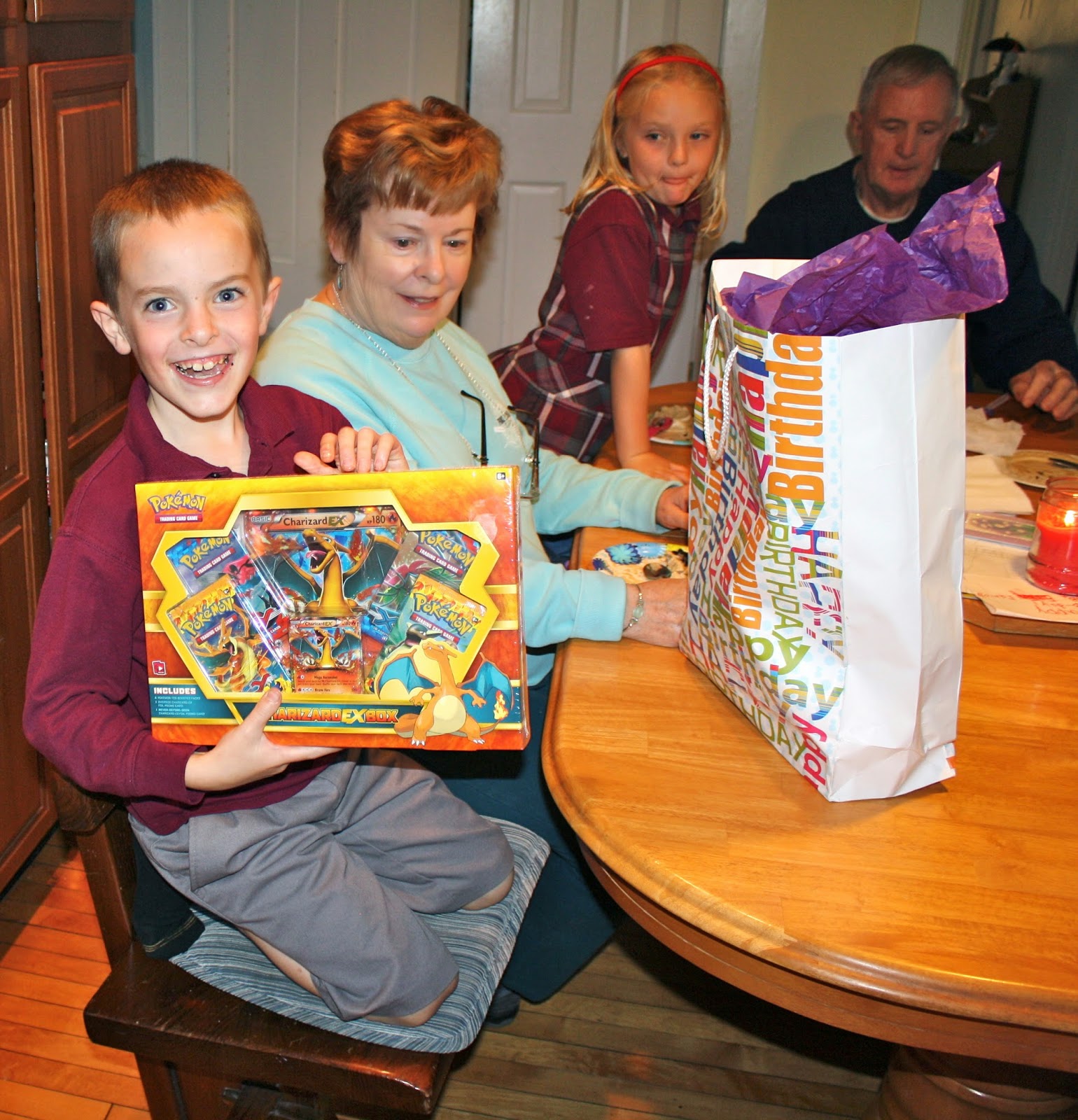 Eamon is obsessed with Pokemon cards.  The boys all love them even though I don't get it at all.  He also got a new soccer ball, a Beyblade, a juggling set from Nana and Gramps, and a future sleepover at his godparent's house.  He said his 8th birthday was great!  Just like him :)  We love you Eamon, with all your quirky ways and sweet as pie personality. 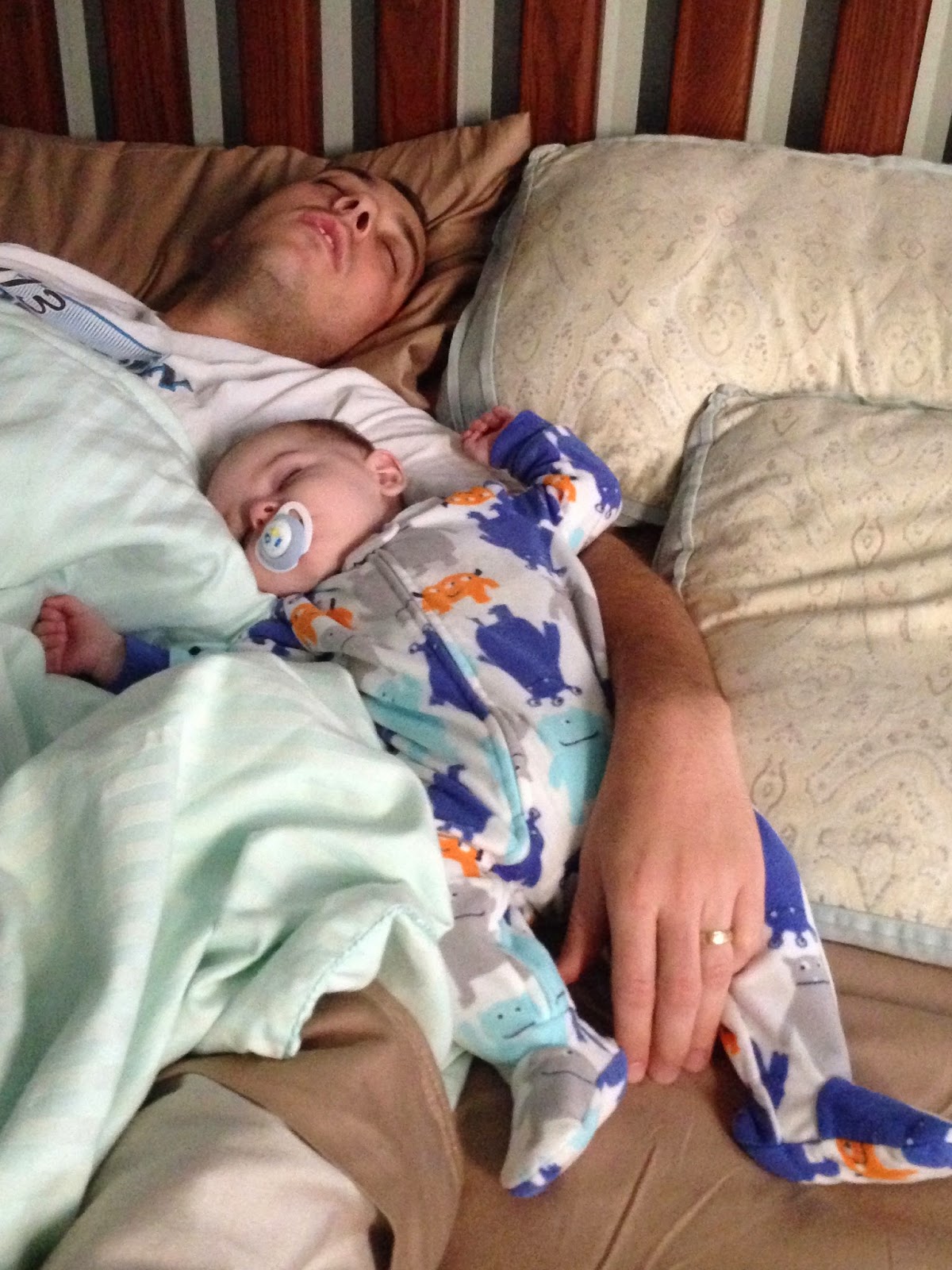 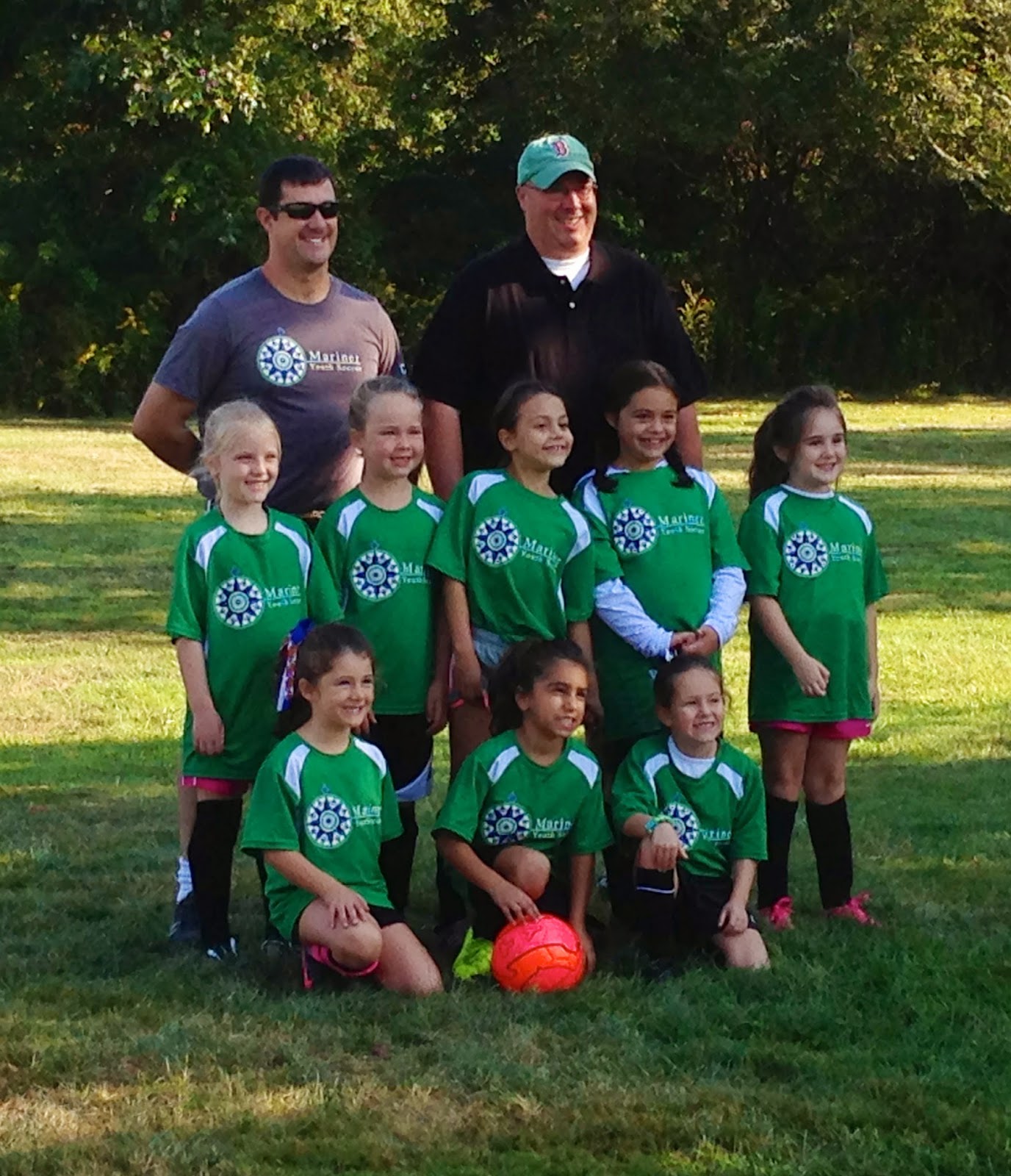 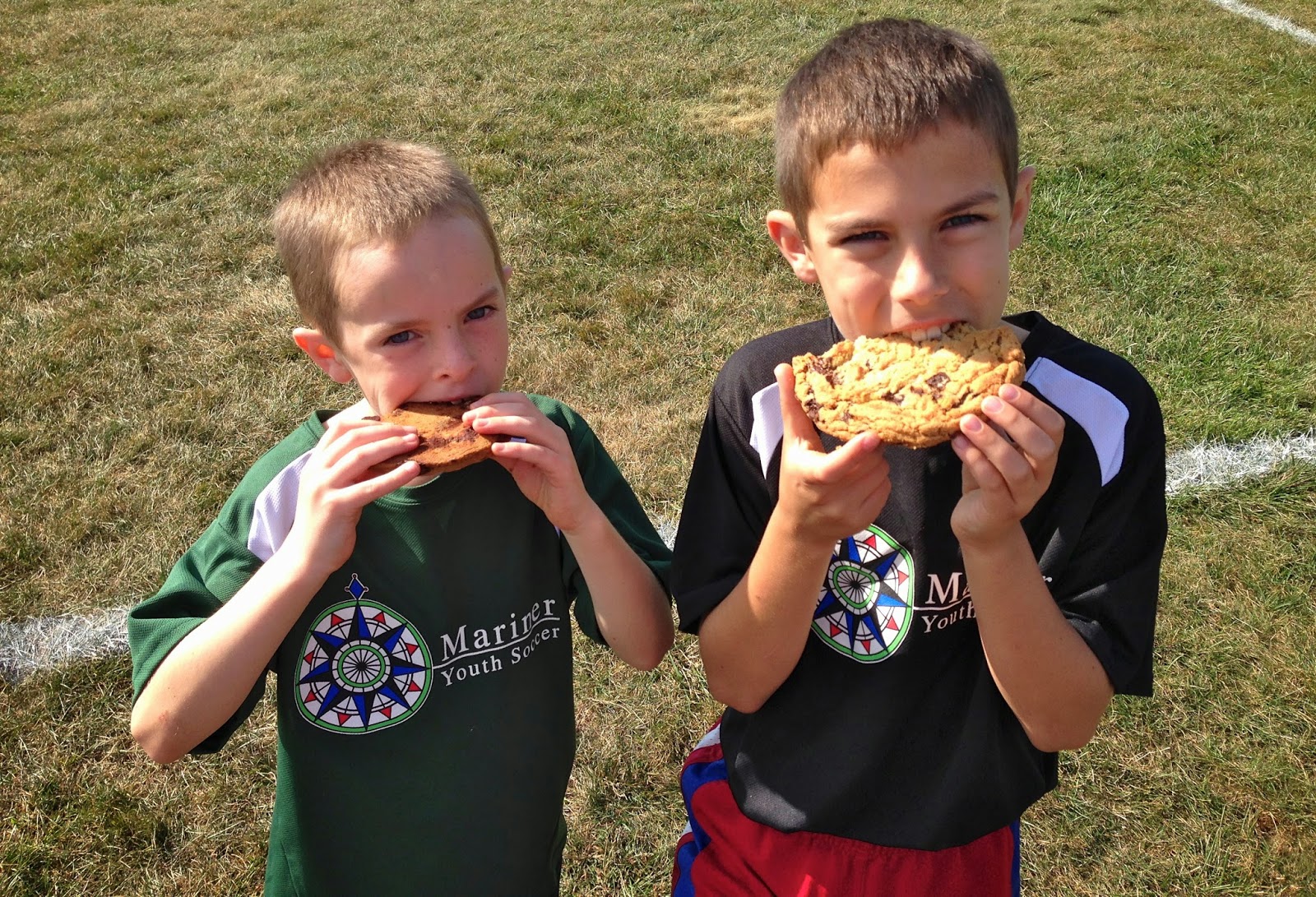 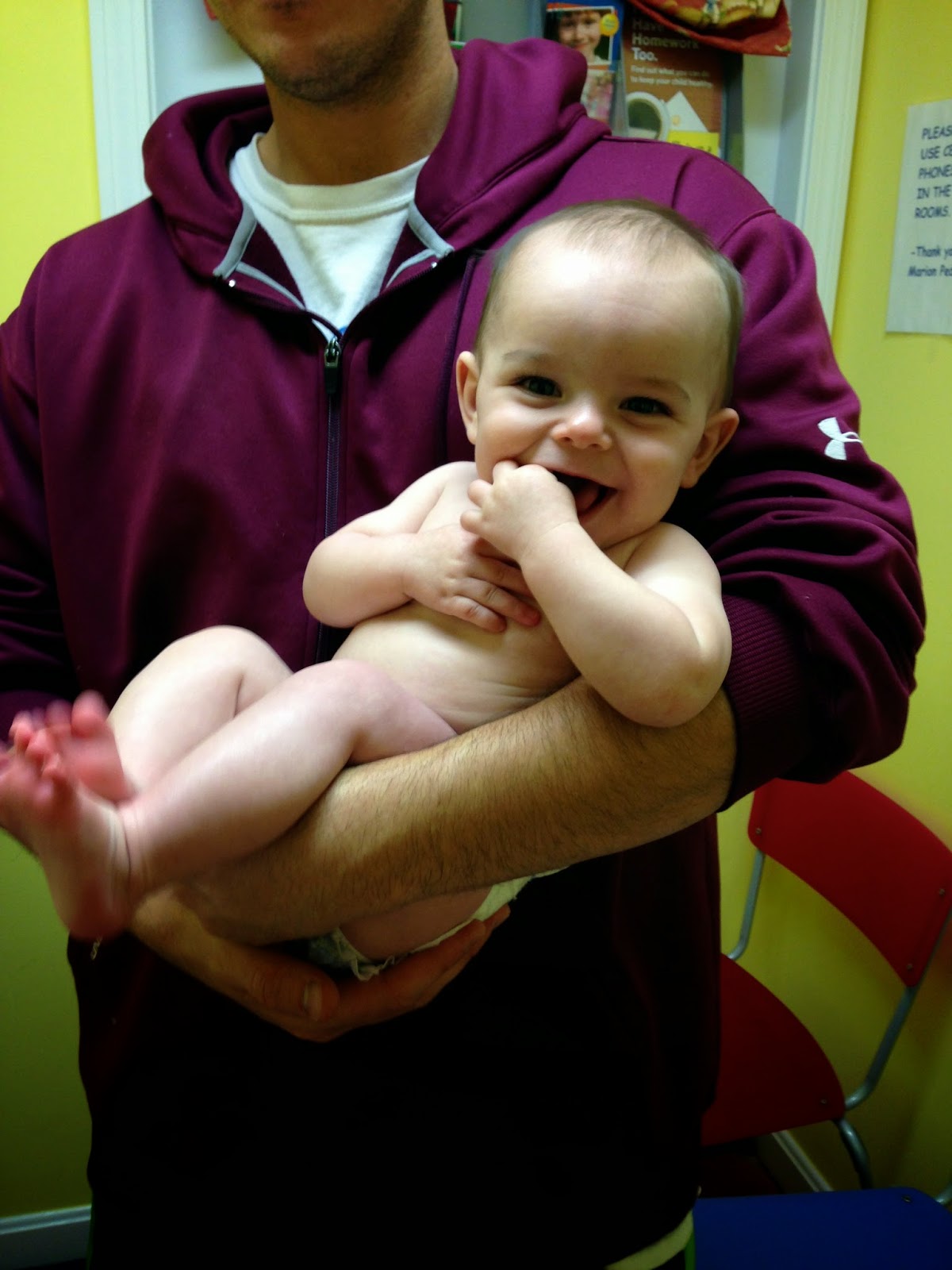 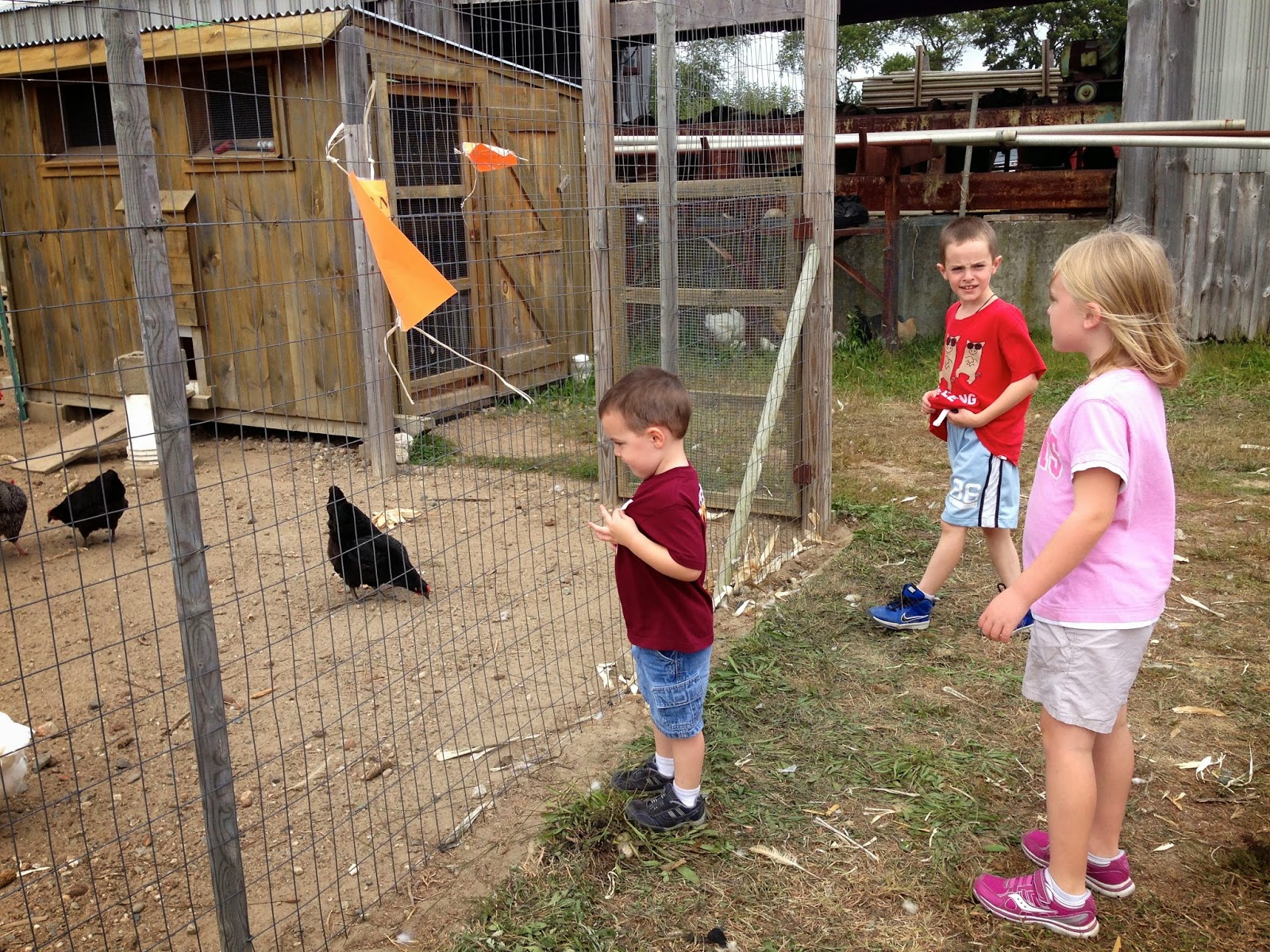 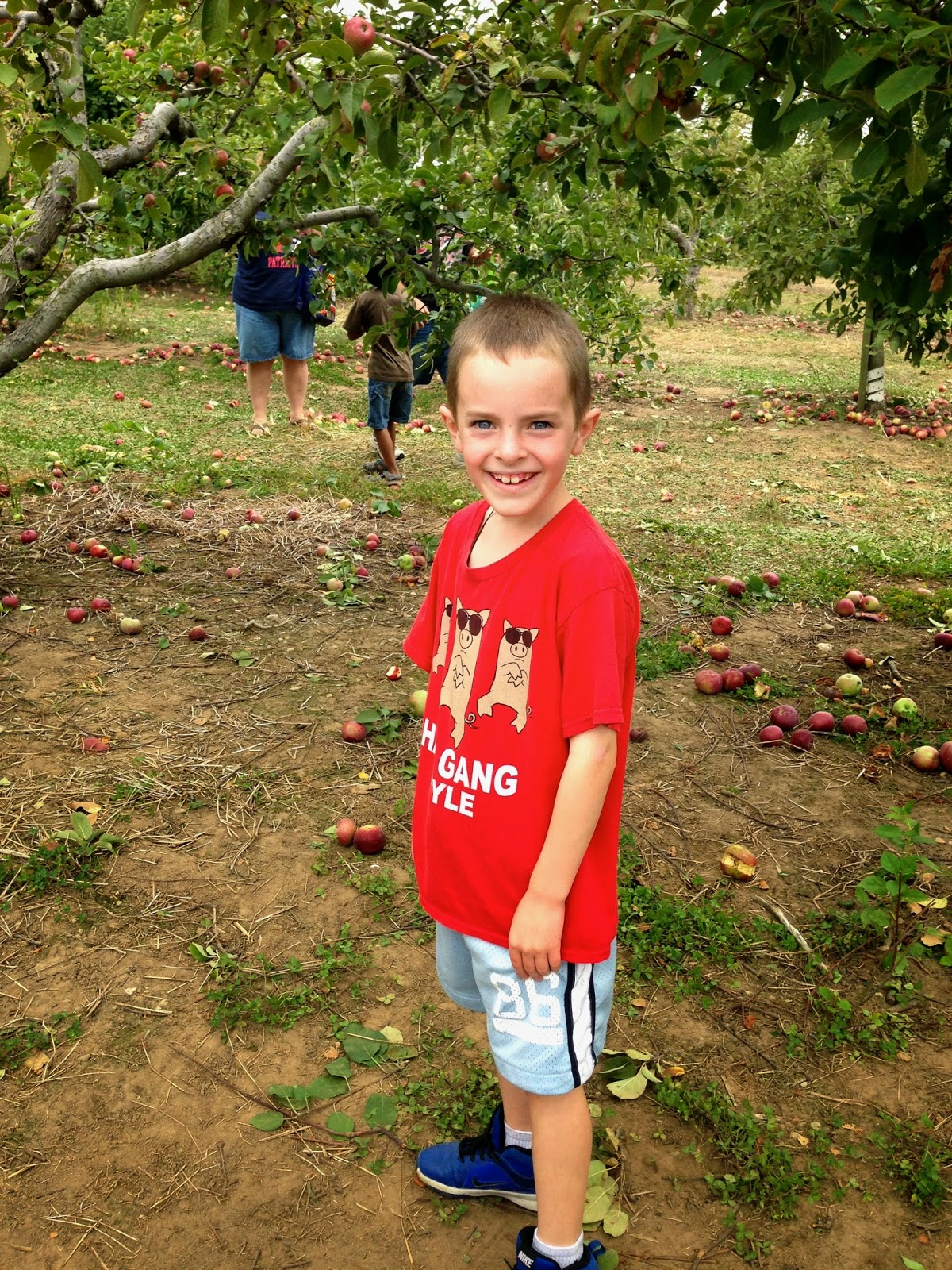 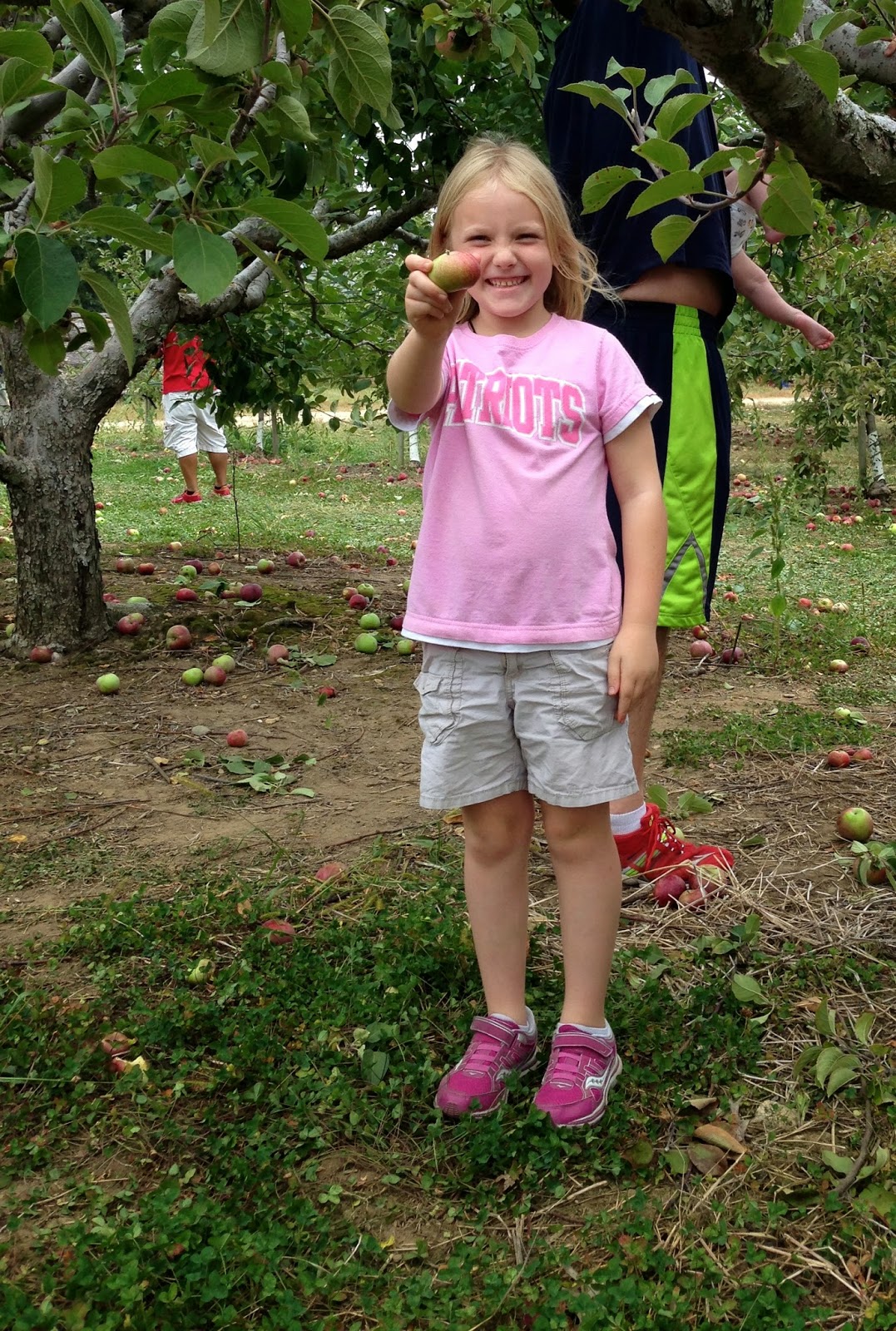 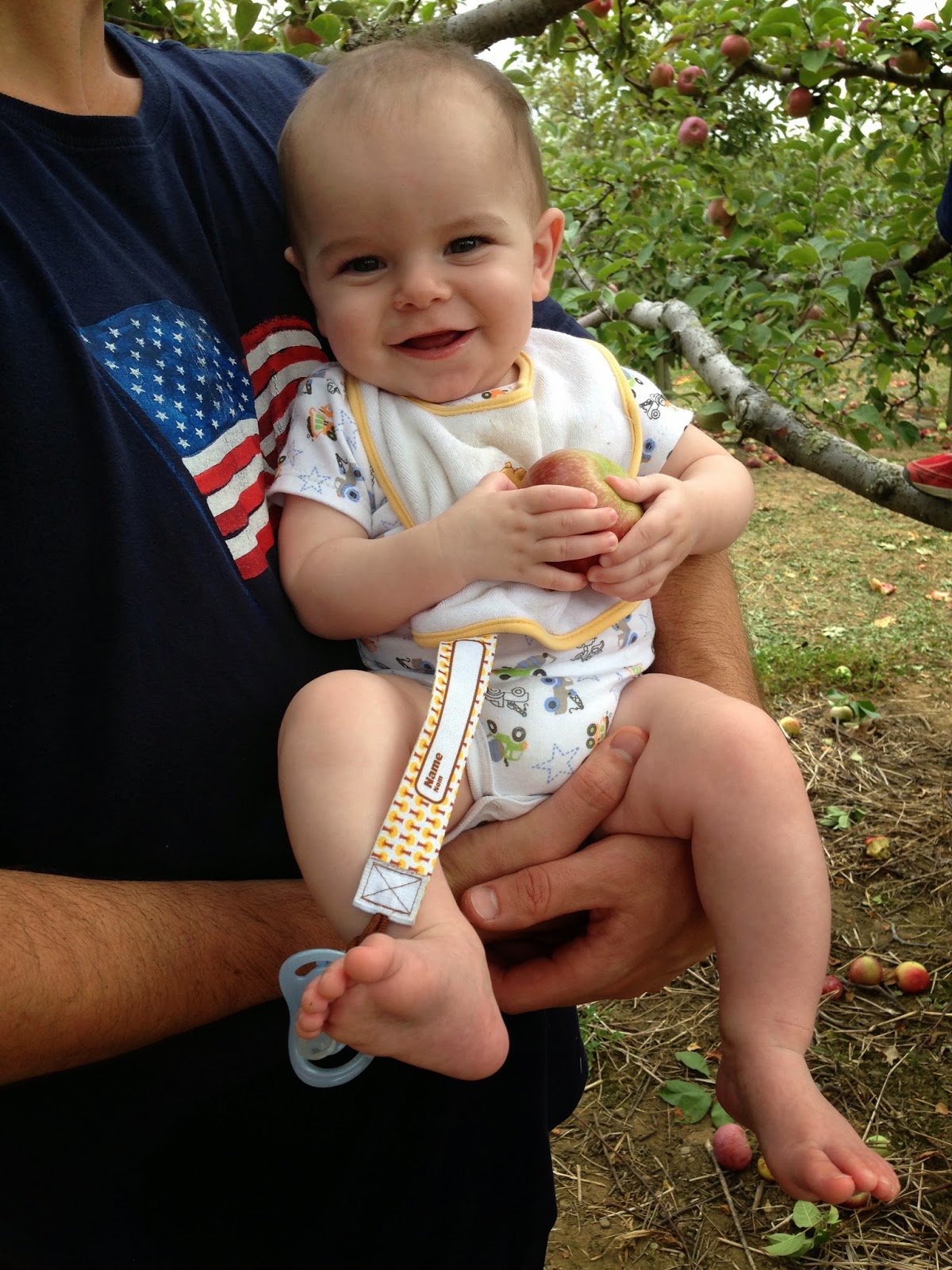 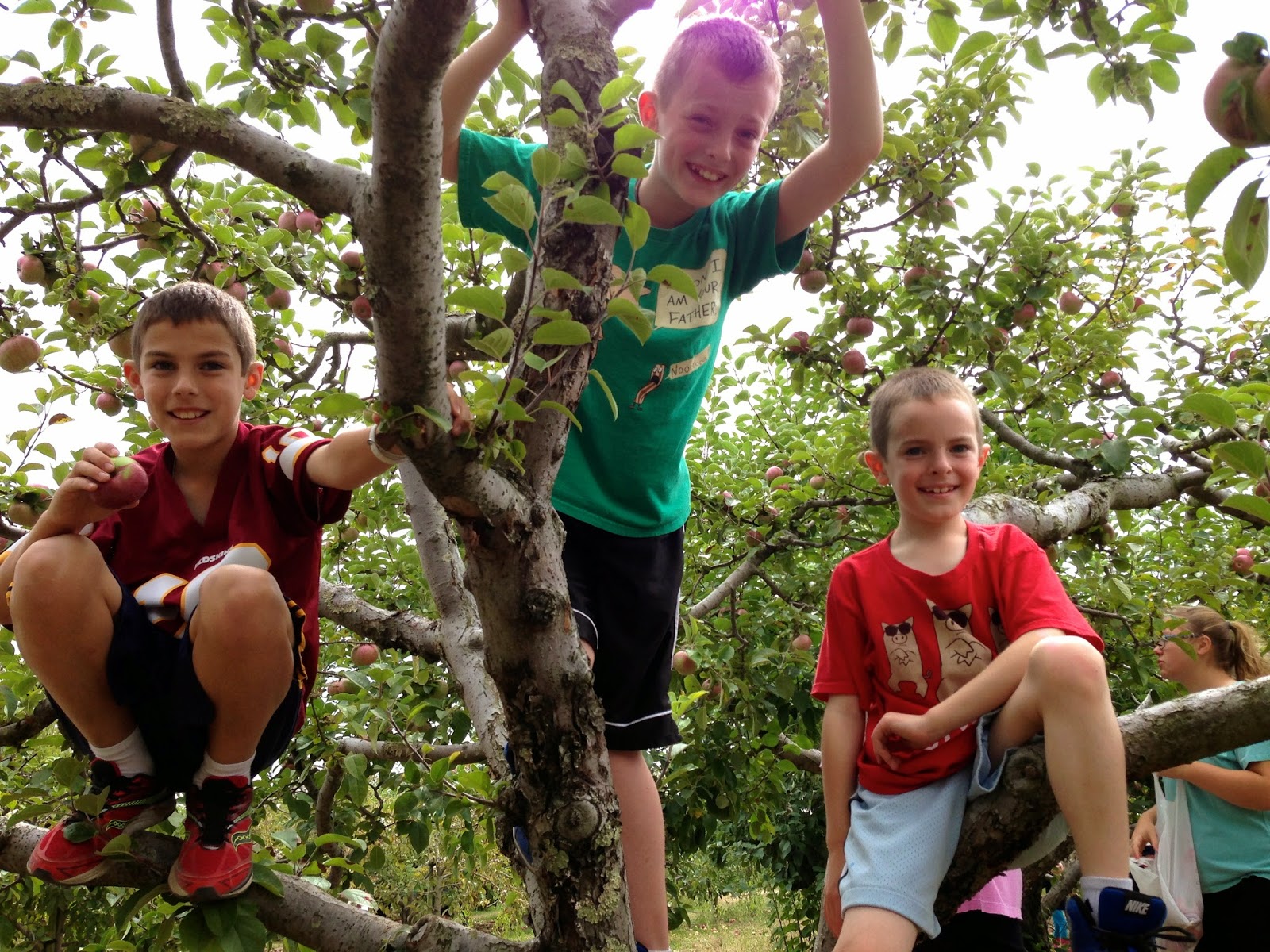 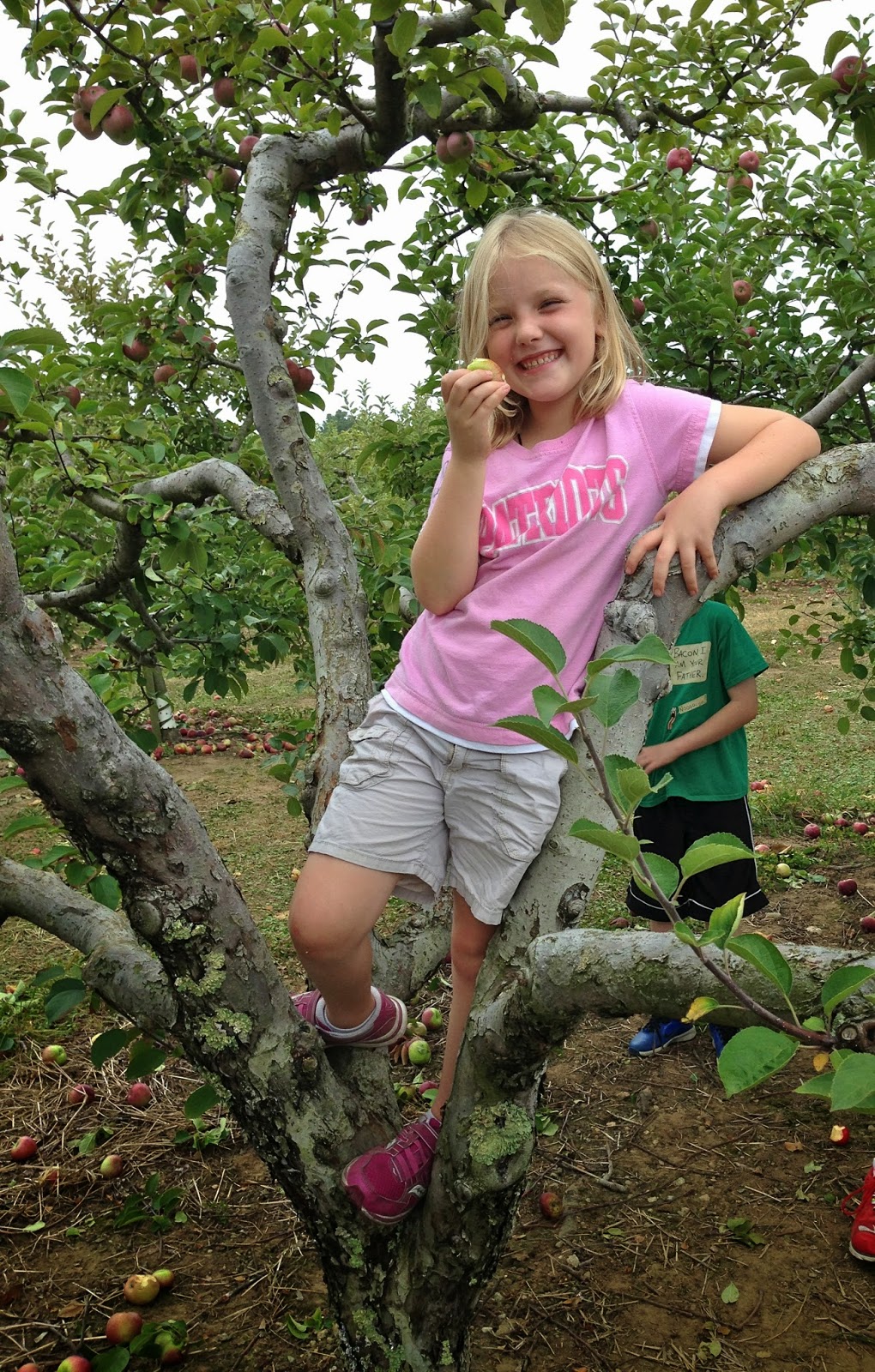 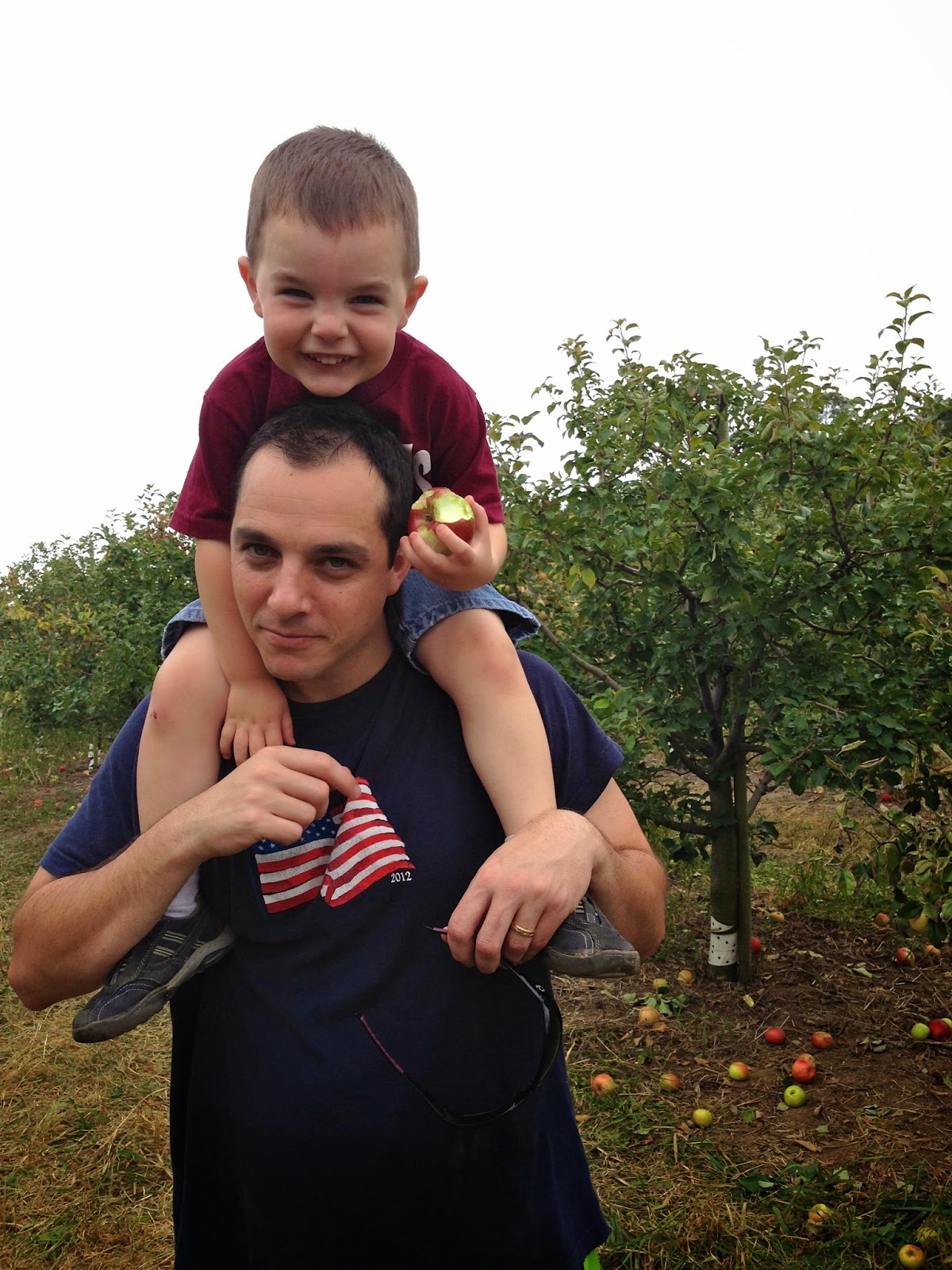 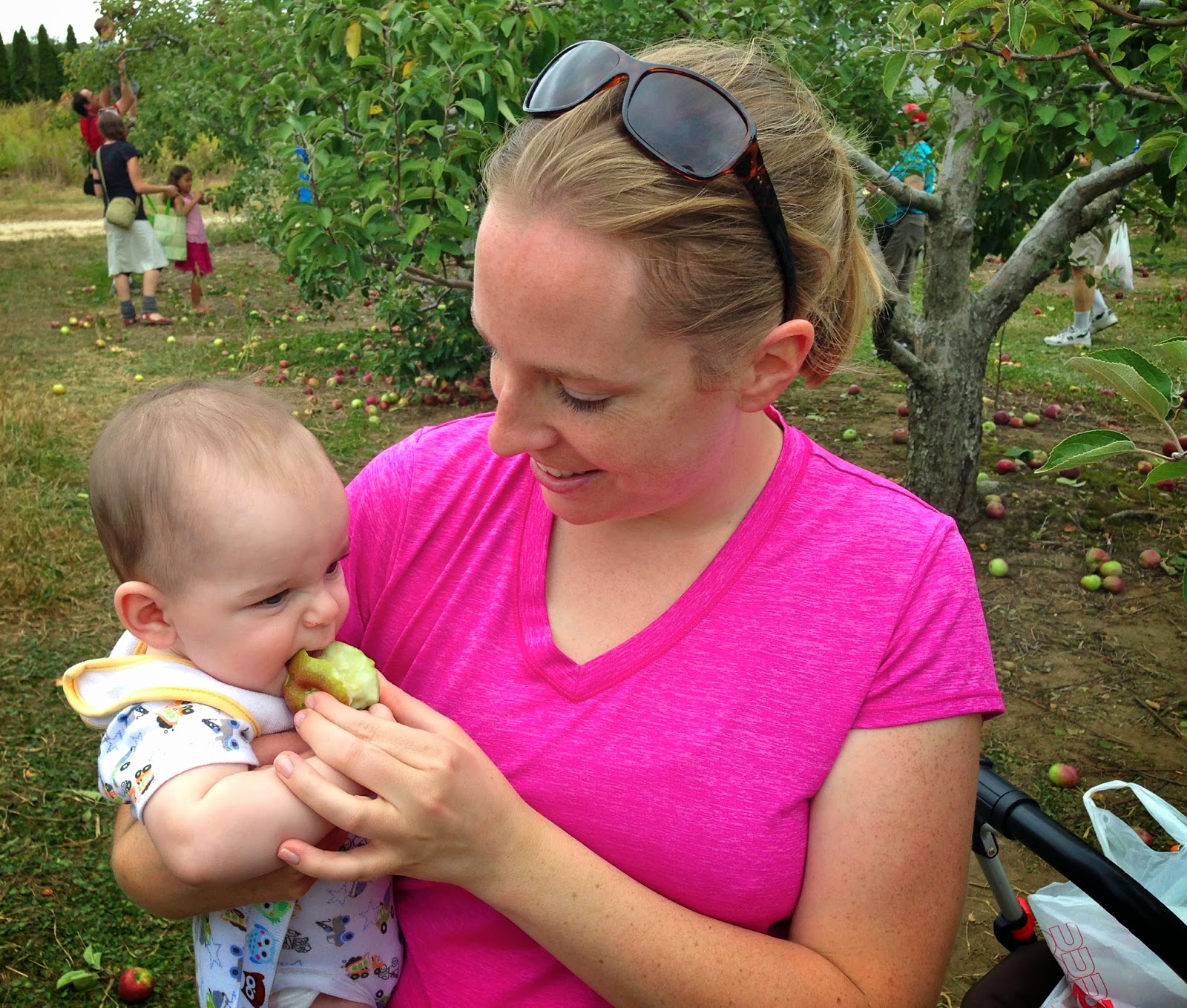