We are off from school this week (being school staff, I actually have to work a couple days but Phil, being a teacher does not) and we've been having some fun...and some not so fun.
Found in my Kindergartner's backpack: 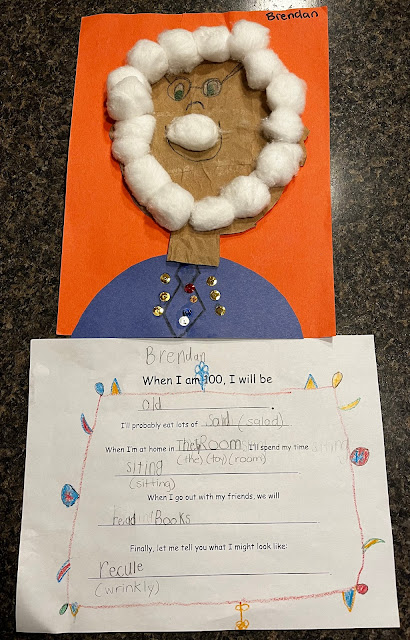 "When I am 100, I will be OLD.  I'll probably eat lots of SALAD.  When I'm home in THE TOY ROOM, I'll spend my time SITTING.  When I go out with my friends, we will READ BOOKS.  Finally let me tell you what I might look like: WRINKLY."
By his description, I already act like I'm 100 :)
We had a few of the cousins sleep over, and we tried mochi after Declan told us his class watched Waffles and Mochi in school and then ate mochi.  I would describe them as weird and not that great, but I heard the mango ones are better (I didn't get one of those to try).  We found them at Aldi's. 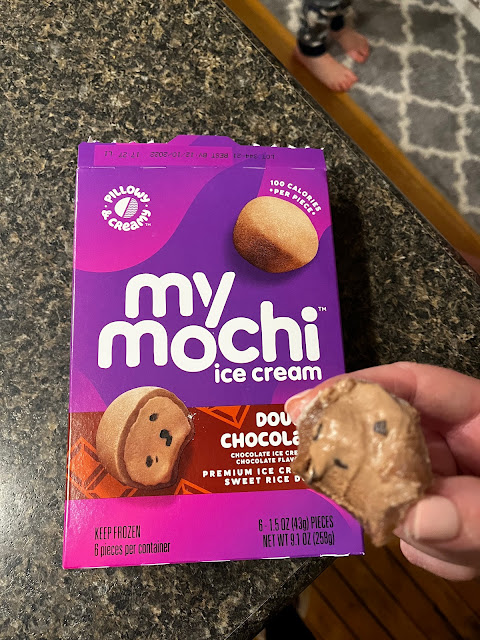 Brendan (age 5) has been talking about two things non-stop recently.
His loose tooth and his half birthday.
He was really hoping to lose his first tooth on his half birthday, but I told him it was no way ready.  He made me feel it's wiggliness every day for the past few weeks and it never seemed to get any looser, though he swore it did.  And trust me, I looooove to pull out teeth and have been known to try too soon, so if I say it's not ready, it's not ready.
Brendan decided to take matters into his own hand and on the morning of his half birthday, he ate an apple, hoping to get the tooth out AND IT WORKED! 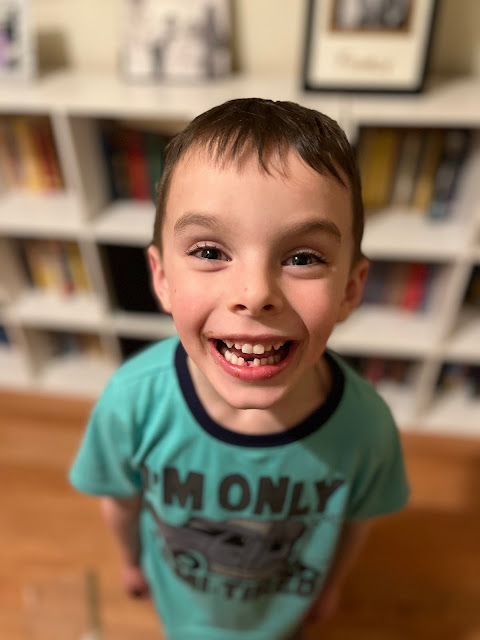 This 5andahalf-year-old is now the proud owner of a toothless smile and a $1 bill from the tooth fairy, who didn't forget!
The sleepover girls used imPRESS nails which were super easy and fun.  Mine are still looking good after four days :) 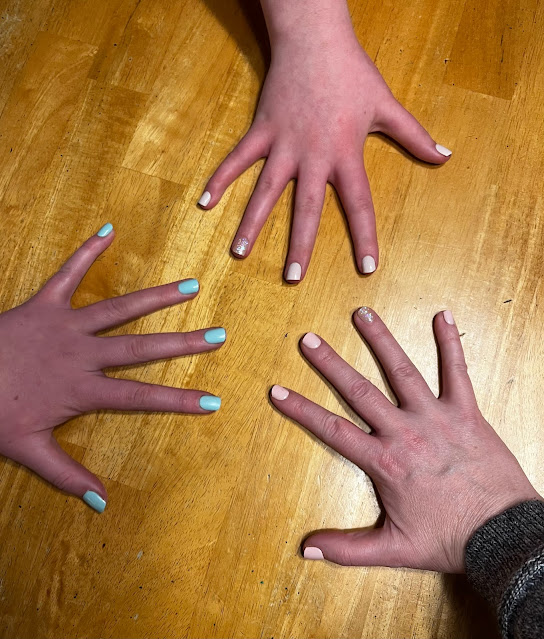 Week in Review: Perms and Penances and Plans

So Valentine's Day came and went without much fanfare.

I think it was because the Superbowl was the night before, and we had friends over so we were fizzled out.  Plus VDay ended up being a snow day very unexpectedly, so there was shoveling to be done and a nice lazy day to be had.  Phil and I did end up going out to a barbeque restaurant for an early dinner which was lovely, and I made the kids m&m pancakes with whipped cream, so they were happy too.  It's funny how some years we celebrate with such intention and then other years the days go by without much thought, and I'm not sure what causes that.
2)
I made an appointment to get a perm next month.  I know!  It's not 1988 anymore but apparently they're coming back?  At least that's what I'm telling myself.  I have very thin/limp/depressing hair and I'm hoping to give it more volume.  I've never gotten a perm before but I'm hoping I look like this: 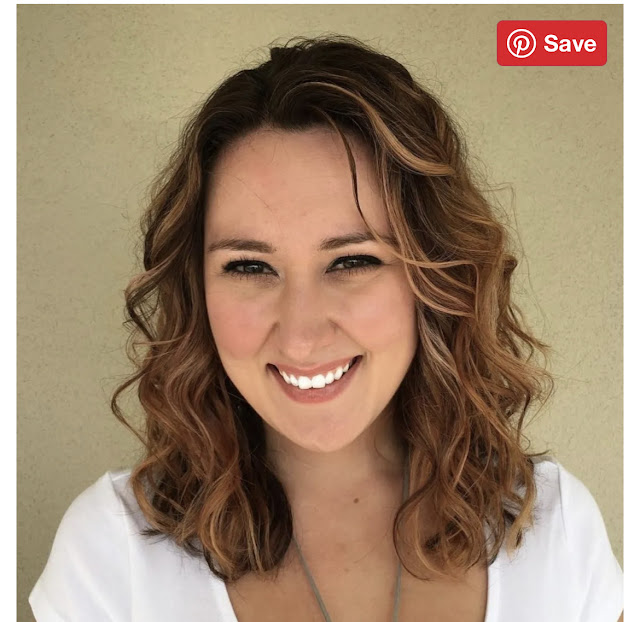 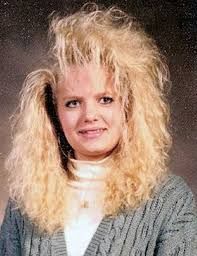 Also how sad for this woman, who probably thought she looked AMAZING for her senior photos and then ended up being the image one receives when googling "bad perm".
Read more »
"Thunk" by Colleen 12 comments:

Is it just me, or does making decisions get harder and harder the older we get?  I find that I run out of patience before the discussion is over and nothing has been decided, which leads to yet another discussion at a later point, which frustrates me that WE ARE STILL TALKING ABOUT THIS and again, patience flies out the window and the decision is left unmade.

So perhaps if I write down all of the decisions we need to make here, you can all chime in and help a mother out?  I am just now realizing that they all have to do with travelling so let's gooooooo:

For the past two years, we have brought the family to Catholic Familyland in Bloomingdale, OH where we have a week-long family retreat.  It's tons of fun and life-giving.  We meet up with my brother-in-law and sister-in-law and their 8 kids and have a little family vacation together.  The hard thing about this vacation is that it is very difficult to get there, not just in the amount of driving time (12 hours each way) but in every other way too.  We have to rent a camper and have it delivered there, pack clothes and supplies for a family of nine without laundry access, plan and shop for groceries out in Ohio, and then cook for said large family from the camper.  The easy thing about this vacation is that once we are there, the kids are entertained and we don't have to plan any activities each day or think about what to do or where to go.  They have cousins and friends and sports tournaments and youth group meetings and pools and so much fun.  We were planning to go back again this summer but found out that some friends had picked a different week to attend, and then our camper guy informed us he sold his camper and we couldn't rent it anymore.  We are looking to rent a different camper, but everything seems to be more money or too small or too far away.

We also have a timeshare in New Hampshire that we pay for each year, and it's the same week we were going to Ohio.  We planned on moving that week in NH to another time (maybe August?) but now that the OH trip keeps giving us trouble, we are wondering if we should just go to NH instead?  The pros - it would be cheaper, only a 2 hour drive each way, we would have a full kitchen and condo with plenty of room.  The cons - once we are there, it's a lot of planning and deciding about what to do and where to go each day, which for a family with our age ranges (kids aged 5 through 19) is hard to please everyone.

The End of Catholic School's Week and That's What He Said

Catholic Schools Week is over, but the kids got a non-uniform pass if they wore their uniforms to Mass last weekend, so you betcha that's what they did.  Non-uniform passes are the equivalent to crypto currency in the private school world.
This week included the 100th day of school, where kids had to dress like they are 100.  So we threw some baby powder on the boys' hair and some of my glasses on their faces and called them elderly.  Maggie put together an old lady outfit and then decided she needed a wig.
"Look old!"
Maggie is giving me serious French Stewart a la Third Rock vibes: 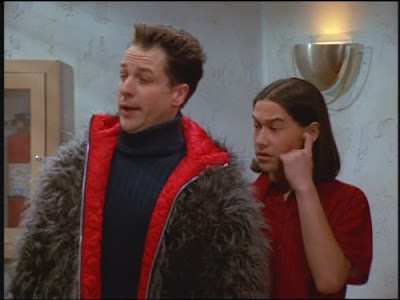 Wow, I really miss that show.

Week in Review: Future Artist, Current Crisis, and Past Meals

Guys.  My baby is a masterful artist.  Just look at the mask he colored for Chinese New Year's: 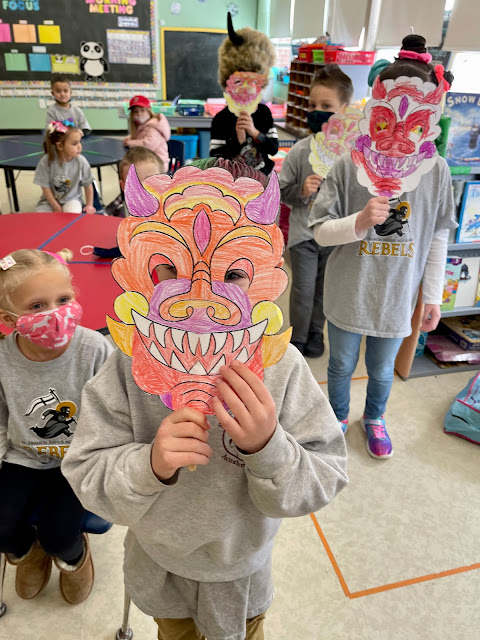 As well as what he called "Pentatonix" Phil: 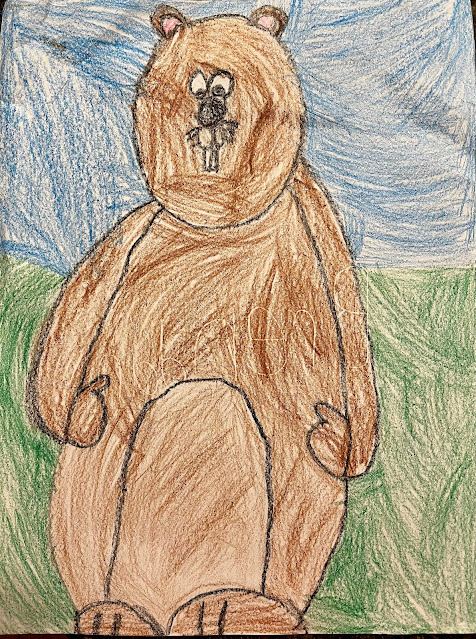 And finally, this drawing of Martin Luther King he created: 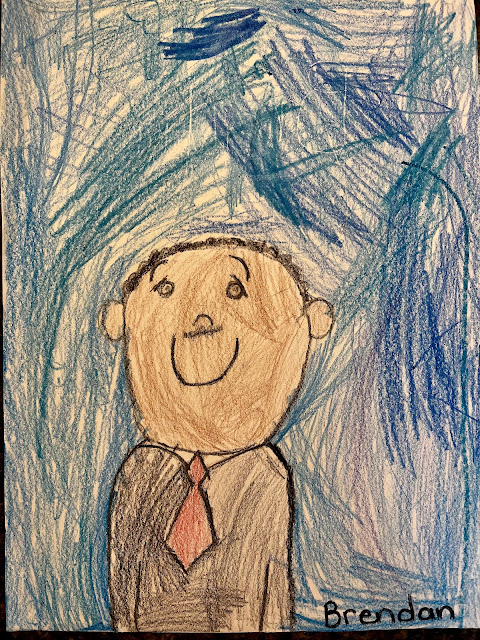 The attention to detail!  The coloring skills! He's only 5 years old!
(Tell me I have a future artist on my hands and I'm not a completely biased mom, as my husband says I am).
Read more »
"Thunk" by Colleen 16 comments: