Christmas During the Time of Corona

On Christmas morning, the kids have to wait until 7 am AND get a photo on the stairs before coming down.  We're at that fun stage where the little ones are up at 5am trying to keep themselves occupied in their room and the big ones are groaning when they get woken up at 7.  Big family life! 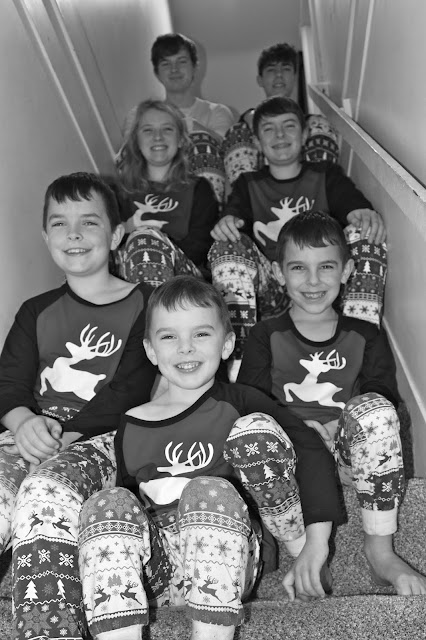 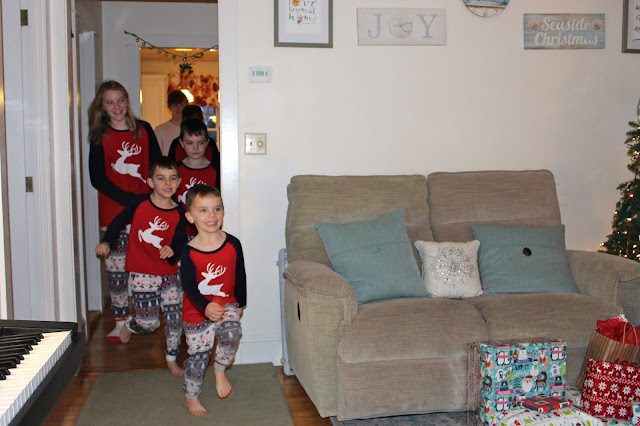 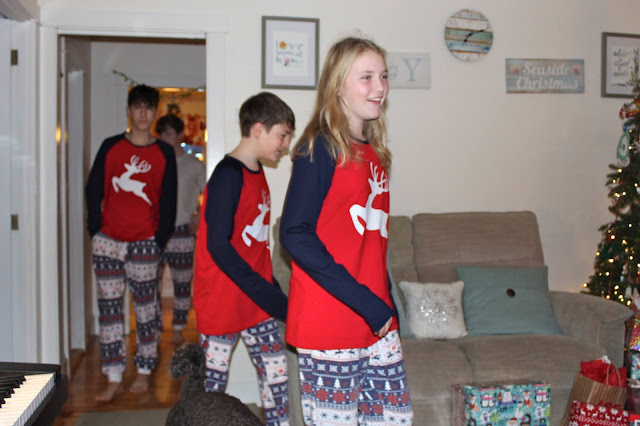 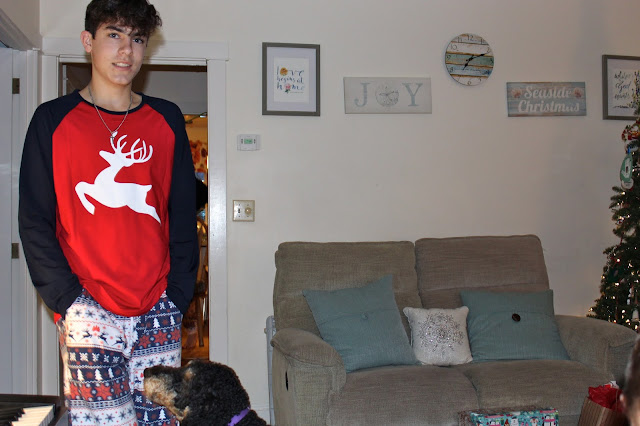 JP couldn't find his matching pajama shirt, but every party has a pooper ;) 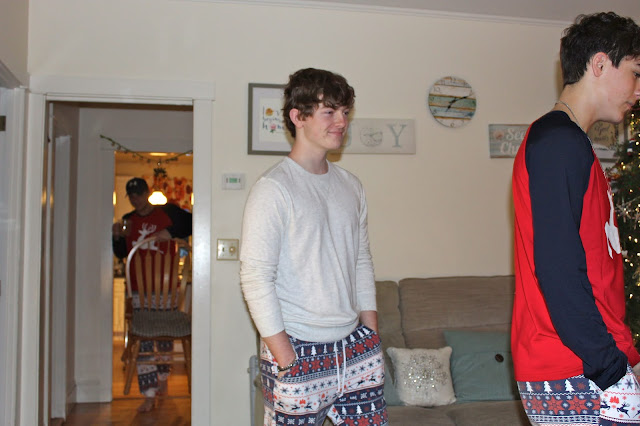 On Christmas Adam, the day before Eve, we were all off from work and school and decided to have the kids exchange their gifts.  When there's nine people in the house, there are always plenty of presents to go around, and spreading it out was much nicer!  All of the Pre-school through 8th graders buy a gift for one of their siblings at the St. Nick's Workshop at school, and the high schoolers went out and generously bought gifts for all of their siblings because they are working men :)  They also wanted to pull some pranks like wrapping all of the gifts up as a toilet seat... 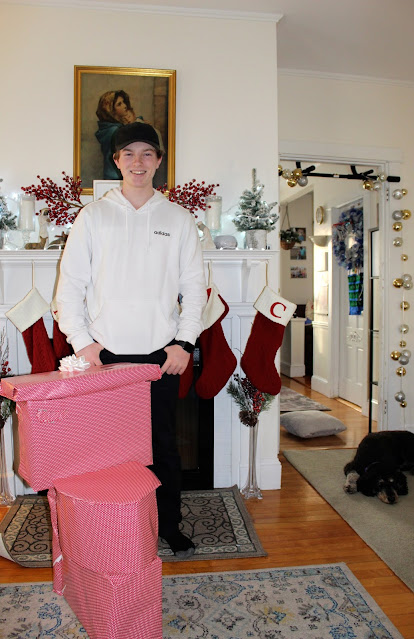 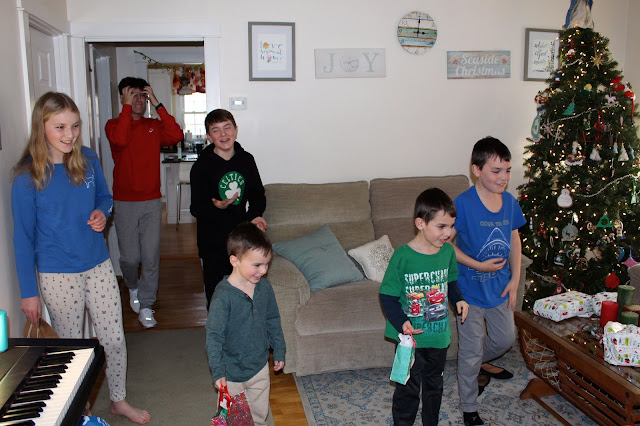 How about a few good eats?  Here are some things we've been cooking lately... 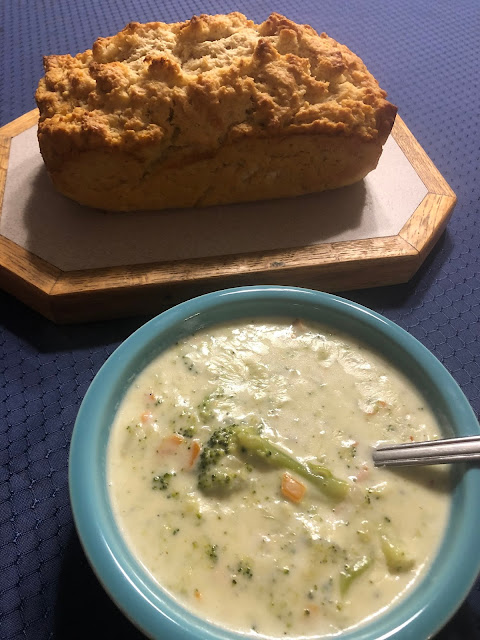 The best Copycat Panera Broccoli Cheese Soup recipe we've tried so far.  Oh man, it's like a creamy chowder filled with veggies.  Delish!  When in doubt for a side, make beer bread (but please don't use more than 1/4 cup of butter - it's sinfully buttery with 1/4 cup).
Read more »
"Thunk" by Colleen 2 comments:

Growing up, I never celebrated the feast of Saint Nicholas, so I was surprised to hear the tradition of leaving out shoes on the night of December 5th so that St. Nick would come and treats would appear on December 6th, his feast day.  I first learned of it when my oldest kids attended Catholic school and were asked to bring in an extra shoe to be filled with chocolate coins.  Now their school makes paper bag shoes for St. Nick goodies, and at home, we use stockings because putting treats in dirty shoes is gross.
Sorry, not sorry. 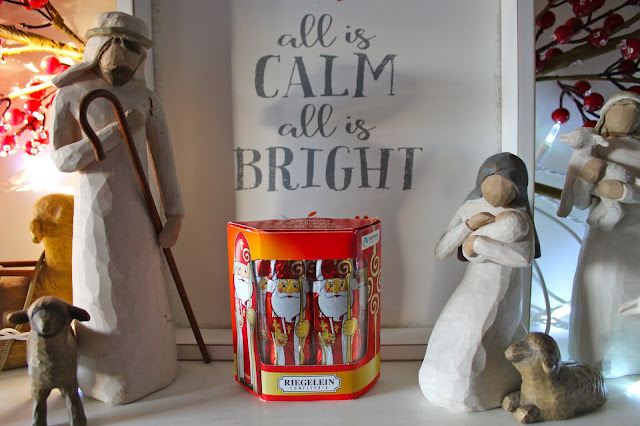 There have been many St. Nick Eves that we have scrambled to find things to put in our kids' stockings.  Sometimes the day just creeps up on ya when you're in a busy season of raising little ones.  But then they get bigger and can help remind you, and every once in a while St. Nick is prepared for landing, like this year. 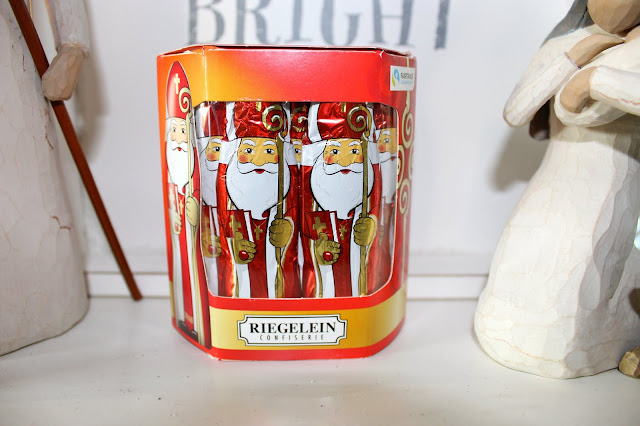 I found these German St. Nick Chocolates online (they now have similar Santa ones for sale) and for the first time ever, I bought matching pajamas for all of us.  It's not cheap to buy nine sets of pajamas, so I made sure to buy a pattern that wasn't necessarily "Christmas exclusive" but we could wear all winter long.  Are matching PJs a little corny?  Perhaps, but it's our last year celebrating all together before they start heading off to college one by one, so I'm going to bask in the matchy-matchy corniness :) 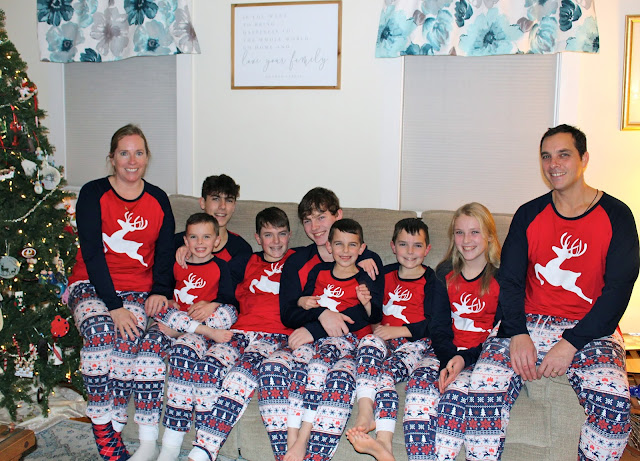 I have also learned that giving gifts on St. Nick's day that you can use and appreciate for the days leading up to Christmas is much more fun than giving those same gifts on Christmas Day.  For example, Christmas jammies, an ornament for the tree, Christmas books, a holiday outfit/socks, or Christmas movies can be enjoyed for a lot longer when they are received on St. Nick's Day.  And that's my two cents...in chocolate coin currency :)
"Thunk" by Colleen No comments:

Can I be real a second?

For just a millisecond?

Let down my guard and tell the people how I feel a second?

Thanksgiving was a bummer.  There, I said it.  I tried, really tried to rally my enthusiasm and have a wonderful day at home, but little things kept going wrong - like the restaurant we were going to order the chicken fingers from was closed even though they were supposed to be open, and it was pouring outside so we couldn't run the family turkey trot or football game. Phil was working on a project for most of the day (not blaming him, he is doing it for me!) and we couldn't see anyone...and it all added up to the lamest Thanksgiving ever.  Which is saying something, considering that one Thanksgiving morning years ago, as we were getting ready to head up to New Hampshire to my brother's house who was hosting my whole family, Alexander started throwing up and we had to cancel and eat whatever food we had in the house instead.  But yeah, this one felt even worse than that one.  I tried to salvage the day by decorating for Christmas that night, which helped my spirits for about an hour before the inevitable fatigue and stress of decorating kicked in.  Now, let me be clear that my kids and husband seemed to have a great day, and I wasn't literally moping around, but internally I was Debbie Downer.  I just don't want another pandemic holiday for Christmas, but I don't see how it's going to be any better??

Geesh Colleen, snap out of it!

I know, you're right.  I have so many things to be grateful for, and I am normally such an optimist, but that day just hit me hard in all the feels.  Onward and upward and offer it up!

How about some photos of the day? 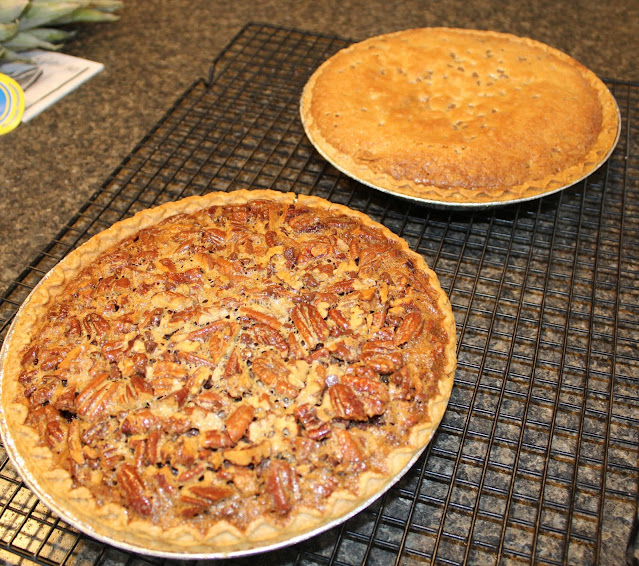 I made a Derby Pie and Chocolate Chip Cookie Pie, bought a pumpkin ice cream pie and my sister gave us a blueberry pie, so our pie game was as strong as March 14th! 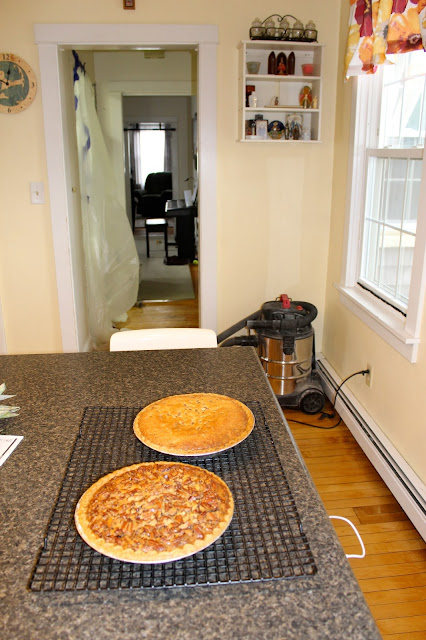 Pie with a side of construction :) 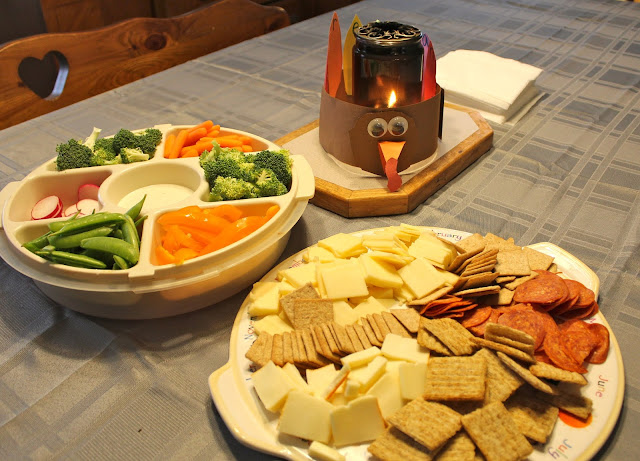 We had some simple apps and our dinner consisted of some of the kids' favorite foods - chicken parmesan, meatballs, potatoes au gratin, cinnamon butter rolls, and manly buns - a weird grouping but delicious nonetheless. 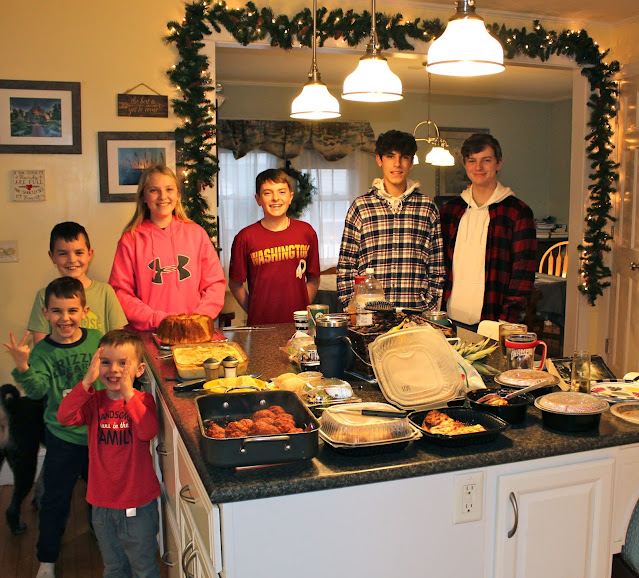 If somebody has figured out how to stop kids from growing up, I'll buy stock in that company because man oh man, I can't believe that I have another teenager!  My beautiful Maggie Rose turned 13 and "felt so spoiled" by all the lovely well wishes and gifts and prayers that came her way.  Her godmother is a sister and her godfather is a priest (we got all bases covered!) and her godfather is also the chaplain at our high school, so when I walked into morning Mass on her birthday, I heard him say "Today's Mass is celebrated for Maggie Martin" and I realized just how lucky she is.  The nice thing is that she also knows it.  She is a sweetheart, who is so appreciative and spent the last part of her birthday evening writing thank you notes. 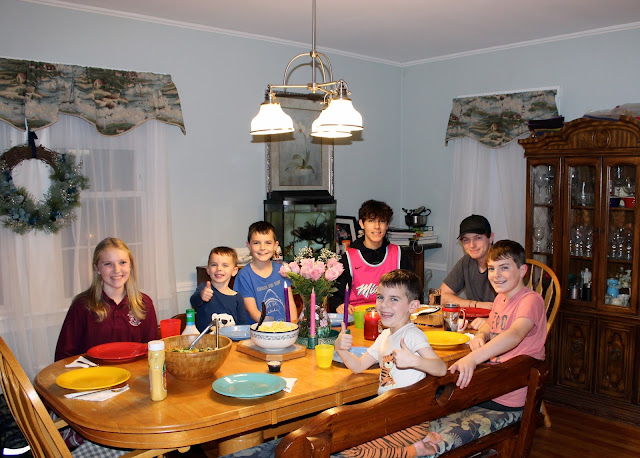 Maggie got donuts for breakfast before school, and chose tortellini (with cheese and meat) with two choice of sauces (pesto and red) and a salad and rolls with cinnamon butter as her birthday dinner.  Mmmmm it was a crowd pleaser.