Our Journey with NFP

I should be posting a Hi Lo today, but this week is NFP Awareness Week, which is an entire week devoted to bringing attention to Natural Family Planning. This year, the theme for the week is Trust: God has a Plan for your marriage. I encourage all of you to open your minds to studying and using Natural Family Planning. It's good for yourbody and soul!
**This post is honest and detailed, so please be gentle** 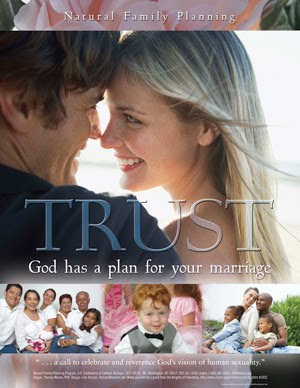 Phil and I were so lucky to be raised in big Catholic families that used Natural Family Planning, attend Franciscan University of Steubenville were it was "drilled" into us even more, and then start our marriage off on the right foot. We took a class in the sympto-thermal method of NFP, which was taught by a Deacon and his wife who had 8 children of their own. We took this class about 6 months before we were married, and honestly, Phil seemed to be better at figuring everything out than I was. I have very long and irregular cycles, and I usually end up getting frustrated by the whole process (did I ever tell you that patience is not a virtue I have yet to acquire?)

As the wedding drew closer, we realized that we would have to abstain for the latter part of our honeymoon, which was super hard, but we got through it. We returned home from the Caribbean, made it through another cycle, and then whoops! got pregnant with John-Paul. I have to admit it, I was extremely upset that we had "failed" in NFP by getting pregnant while trying not to. Before anybody judges us, please realize that at the time, I was the only one working and providing benefits because Phil was in grad school. We were living in my parent's house because we were managing the ice cream store on the Cape for the summer, and didn't want to get an apartment for only 3 months. We literally had no idea what would happen in our future, but being pro-life and faithful to God's Will, we started getting really excited for the baby growing inside of me.

Once John-Paul was born in February 2003, I hoped we could obtain the infertility that is supposed to happen while breastfeeding. No such luck for me (or my mother or sisters, it must be genetic), and my cycle returned when John-Paul was 4 months old. Luckily, Phil got a job teaching in September 2003, and I stayed at home with J-P. We struggled financially, and my little sister was getting married in September 2004, and since I was to be the matron-of-honor, we decided to use NFP to postpone the birth of the next baby until after the wedding. There was one specific month I remember saying to Phil that we could not conceive a baby because I would be giving birth at the wedding. Well, guess what month we conceived? Luckily I didn't give birth until 9 days after her wedding, to Andrew in October 2004.

After Andrew was born, money was even tighter because our housing situation changed yet again, and now our rent was $1000/month, our portion of the health insurance was $500/month, and our student loans were $600/month. We had two car payments and two little ones in diapers, and Phil was making $32,000 a year, before taxes and insurance coming out. We couldn't make ends meet anymore, and started doing all sorts of side jobs to pay the bills. Phil worked summers, became the CCD Coordinator of our Parish, and took on a parking lot duty job at school. I babysat, tutored students in math, and had a couple of small bookkeeping clients. I even worked nights at H&R Block during tax season so Phil was at home with the kids. Needless to say, we were doing our best to provide for the children we already had, and were using NFP to space out the next child.

Once Andrew was 15 months old, I was getting baby fever and mentioned to Phil that if we tried to get pregnant right now, Andrew and the next baby would be 2 whole years apart (after having the first ones 19 months apart, 2 years seemed like a BIG deal!). Well, Phil didn't need much prodding, and Eamon was born in September 2006! I must point out that this is one of the huge benefits of using NFP, it's not just to postpone pregnancy, but to achieve it as well. And you don't have to worry about getting off the pill for a while before trying to conceive, you just do it :)

Eamon really threw our world for a loop! He had colic and was allergic to dairy and soy, and was a very hard baby. I fell into post-partum depression, though at the time I convinced myself it wasn't. Because my diet was so limited while trying to breastfeed him, and because I had just started working part-time, I gave up and put him on hypo-allergenic formula. My cycle returned when he was 4 months old, and Phil and I were planning to use NFP to postpone the next baby for a long time, because we seemed to have every grave reason in the book to do so! But, by complete surprise (NFP does require being open to life at all times!) we conceived Maggie when Eamon was only 5 months old.

I was beyond shocked, I was devastated. I was depressed, and overwhelmed and really questioning this whole NFP thing. I never wanted to use artificial contraception, but figured the only way to ensure postponing another baby was complete abstinence. Poor Phil! I was feeling very sorry for myself, and then feeling guilty about those feelings. I was a Catholic mom after all, I wanted a big family, I was a strong advocate for NFP, but I was also fed up. I started seeking out more mature Catholic moms to get advice from. Phil bought me some books from Danielle Bean, then I discovered her blog, and the world of blogs soon followed. I was so happy to meet other moms who had lots of little kids (some on purpose, others not so much) and who could relate to our situation.

I started to feel supported by these women who had already walked in my shoes, and when we found out Maggie was a girl at the 20 week ultrasound, my depression was instantly lifted! I loved my boys so much, but wanted a little girl too, and here she was. I finally could see God's plan all along...she had to be conceived at the exact moment she was for her to be her. If we had not been open to life by using NFP, Maggie wouldn't be here at all. In fact, none of my children would be here, and that is just too awful a thought to handle. We currently use NFP to postpone Baby #5 because we still struggle financially, but as my mom says, "Your rewards will come in the next life"!! We may not be "rich" monetarily, but we are rich in love and family. And the longer we wait, the more "ready" we are to expand our family.

Using NFP means giving of our whole selves...to God, to each other, and to our children. Yes, sometimes it's hard to abstain when your husband is a hottie (are you blushing, honey?) , and yes, an unexpected pregnancy can be scary, but following God's Will is the only way to ultimate happiness, and I'm so glad NFP is part of His plan.
"Thunk" by Colleen 12 Click here to leave me a message

Links to this post
And find lots more here!