Stories from the Image of Divine Mercy

This past weekend, we got to see the movie, The Original Image of Divine Mercy, at our parish.  (You can go here to see if there is a screening near you).

It was a very good documentary about how the image of the Divine Mercy came about.  Sr. Faustina had revelations from Christ, and kept a diary under obedience from her spiritual director and confessor, Fr. Sopocko. In one of these revelations, she had a mystical vision of the image of the Merciful Christ.  With Fr. Sopocko modeling as Christ, and Sr. Faustina describing the vision, an artist named Kazimirowski  painted this Divine Mercy Image over siz months with much input from Sr. Faustina on what he was doing wrong: 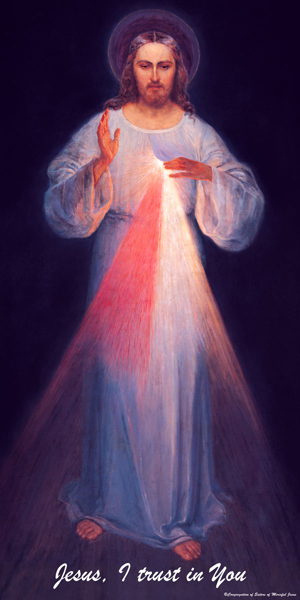 Right after the painting was completed, World War 2 began and the painting was stolen, hidden, forgotten, found, replaced, stolen again, etc. etc. until it finally ended up in a shrine in Vilnius, Lithuania in 2005.  This film tells the story of the image, and while interesting and thought provoking, it was at times a bit slow and repetitive (and the metal folding chairs were uncomfortable for this pregnant mama, so that didn't help!).  There are commentaries from Jim Gaffigan (our favorite comedian), Harry Connick Jr. (I didn't know he was Catholic!) and lots of priests and nuns who either lived through the ordeal or are experts on the image.   I am definitely glad I saw it because I keep thinking about it.

There are three "takeaways" from this film for me.  The first was that Sr. Faustina, after months of trying to convey the vision to the artist, cried when she saw the finished product.  At first I thought she cried tears of joy, but then realized she was so upset at the outcome of the image.  It did not meet her expectations of her vision.  This was so sad to me,but in reality, how could she ever be satisfied with the painting?  How can one see the face of Christ and then try to humanly recreate it?  An image of Our Lord can never be as beautiful as He actually was.  And that's perfectly fine, because it's not the image that we are adoring, it's Christ who receives our Adoration.

The next two points are connected.  This image was created with great importance by Sr. Faustina and Fr. Sopocko, and then promptly hidden away and forgotten about by the world.  Sr. Faustina constantly wrote letters to get the image into a popular place so all could venerate it, but did not have very much luck.  She knew through her revelations that she was to:

Paint an image according to the pattern you see, with the signature: Jesus, I trust in You. I promise that the soul that will venerate this image will not perish. I also promise victory over [its] enemies already here on earth, especially at the hour of death. I Myself will defend it as My own glory (Diary, 47, 48). I am offering people a vessel with which they are to keep coming for graces to the fountain of mercy. That vessel is this image with the signature: Jesus, I trust in You (327). I desire that this image be venerated, first in your chapel, and [then] throughout the world (47).

How frustrating it must have been for her to not be able to convince everyone of the importance of this image.  Which brings me to the other two points.  The first being that God himself gave us this image of mercy right before the second world war began and in a country where people suffered and died because of their faith.  He knew it was needed for that time.  So why now is it coming back full force at this modern time?  What do we need to be prepared for?

Likewise, this taught me a lesson in God's timing.  If Christ gave us a command, as He did to Sr. Faustina, and we could not bring it to fruition (either through our own stubbornness of the fault of others), His work will still be accomplished.

So many times, I feel like I need to be in control of a situation because I know it's what's best, but it becomes out of my control, and I just have to trust that God will take care of it.  This is not an easy state in which to live, but sometimes there's nothing more that we can do but pray and trust.  God isn't confined by time, only we are!  We must remember that ALL things work for good, whether we can see that finished product or not.  Sr. Faustina died at the age of 33 (goosebumps) and never saw the original image hung in the church as she wanted.  But the whole world can see it now, all in God's perfect timing. 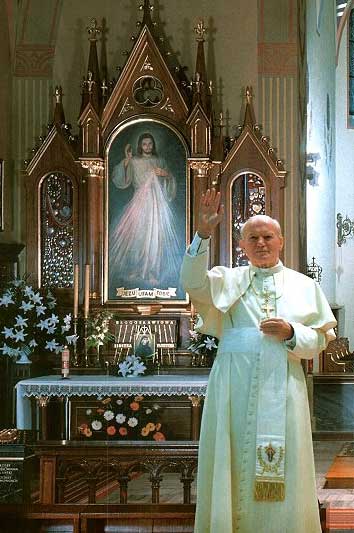 After seeing the film, even though we already prayed the Divine Mercy Novena and had heard about the promises before, it was a good reminder for us to get an image for our own home to venerate.  Most images I can find look like this one, a rendition by the painter Hyla: 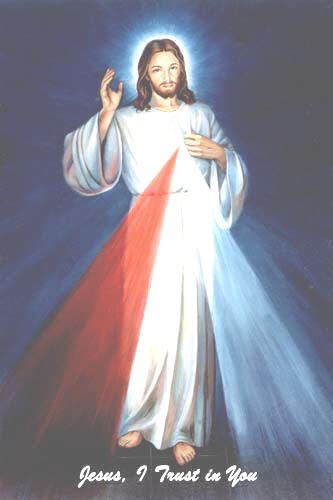 You can see the difference between this painting and the top one.  Most notably, Jesus' gaze is different in the original image:

I would like to get a replica of the original painting as it seems to be a more authentic version of what Sr. Faustina actually saw.  However, as she taught us, it's not the image that matters, but the graces that pour forth from His merciful heart.

Not in the beauty of the color, nor of the brush, lies the greatness of this image, but in My grace. (Diary 313)

Jesus, I trust in You.

Unrelated photo, but so profoundly beautiful, I just had to share: