The Break of Spring

I just love this break from school and work!  The weather is historically nice, and everyone needs a break from the hard work of March and the diseases being spread around the schools.  Blech, open the window, bleach all the things and see ya in a week.  This year was especially nice because we were let out on Holy Thursday as a half day and didn't have to return until today, 11 days later.  If we didn't have a baby, we would have planned a long trip somewhere.  But alas, this guy keeps us close to home and is back to his up-at-night antics once again.  I'm so sad we can't shove his chubby self into the Magic Sleepsuit anymore.

The week started out wonderfully, as the weather was sunny and warm, and I was able to go for a run with Phil each morning while the baby napped, and then we continued to play outside at the park and walk the dog, and I racked up so many steps on my Fitbit from Monday through Wednesday. 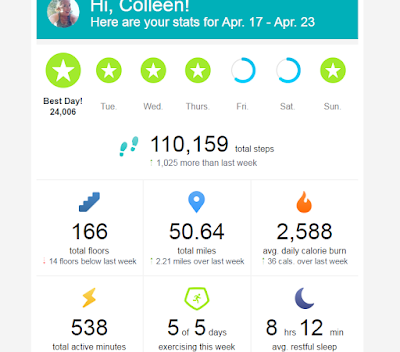 Then on Thursday, my sister and I left for Philadelphia for my Uncle Tom's funeral.  She took her three kids, and I took three of mine - Andrew, Eamon, and Maggie.  John-Paul was visiting our alma mater, Franciscan University with his cousin's family and had a grand old time: 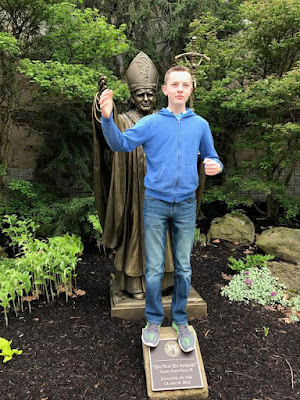 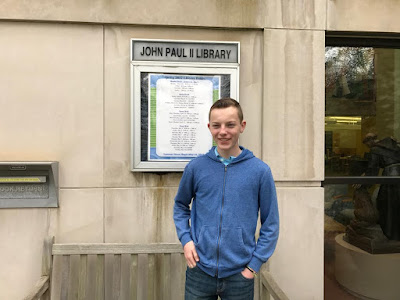 He got his braces off this week too!  So grown up :( 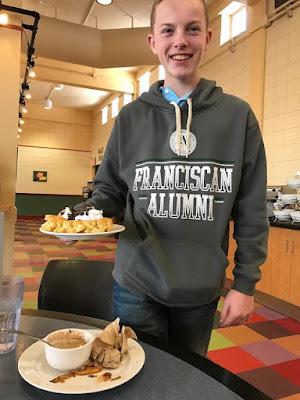 We asked him why he bought an alumni sweatshirt, and he said because it was the most comfortable.  (I'm not sure he knew what alumni meant!)

Anyway, the Philadelphia van headed out on Thursday morning and headed straight into the city to sight see a bit: 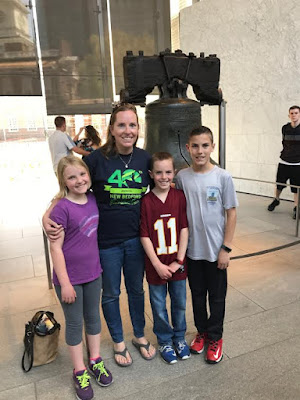 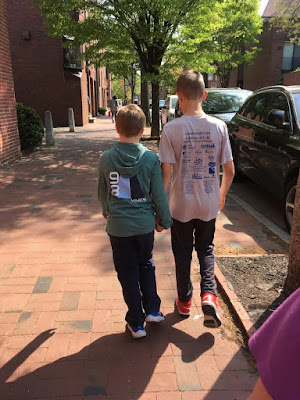 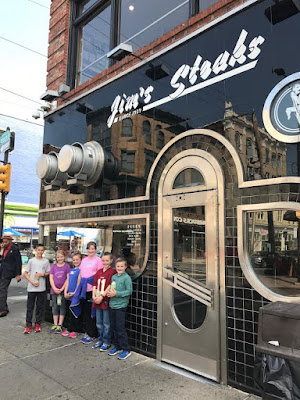 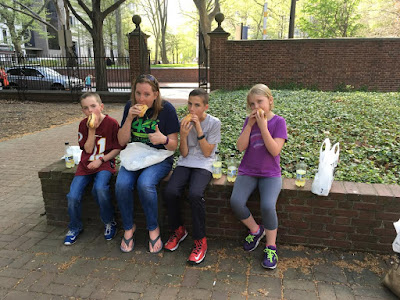 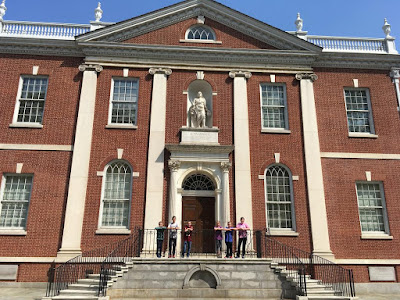 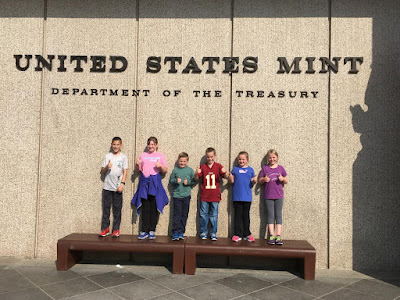 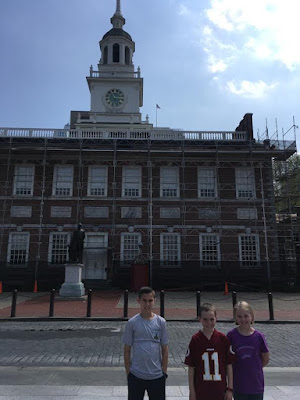 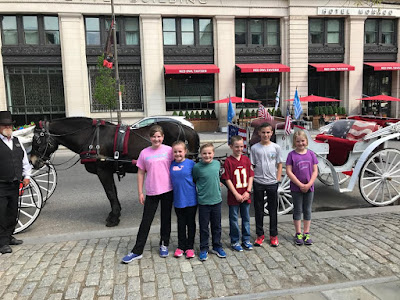 It was a beautiful, hot day and we only had about 2.5 hours to spare, but we fit in a lot!  We toured the U.S. Mint which was the kids favorite part of the day, got a Philly cheese steak and pretzel (my fave parts), saw the Liberty Bell, and walked all over the city.  The cousins had so much fun together and it was so easy vacationing with only big kids who can walk!

We headed to the hotel and joined up with my parents, my brother, his wife, and their three kids for some swimming time and then out to dinner, where the kids got to sit at their own booth and the tired moms got to have a quiet dinner :) 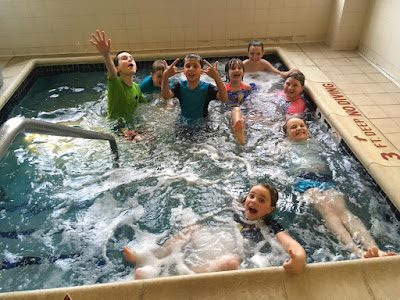 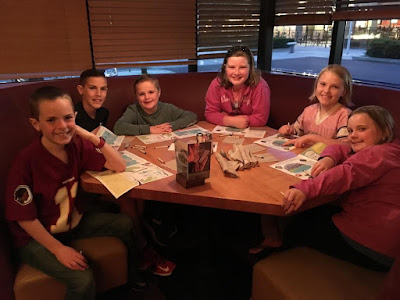 On Friday morning, I took the kids swimming again and then we got ready for the funeral mass.  But first, breakfast at Andy's Diner!  Two eggs, homefries and toast was only $1.95! 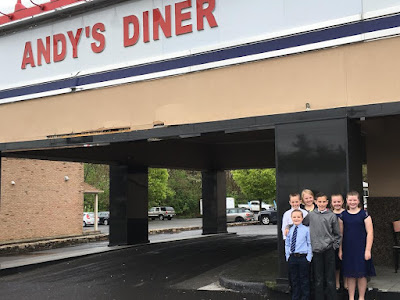 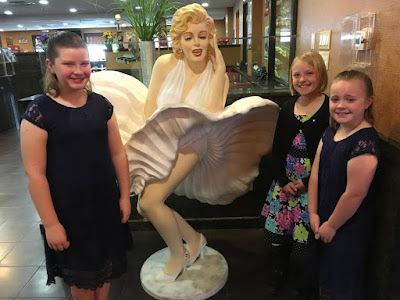 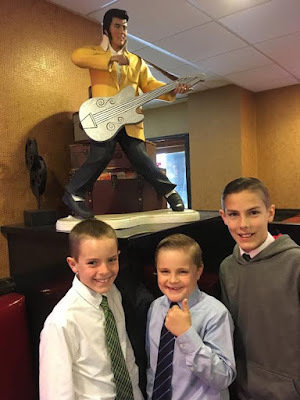 We headed over to the church and met up with family from all over.  It was so nice to see my cousins again.  My Uncle Tom was a well-known and well-loved man, and the line of people waiting to pay their respects proved it! 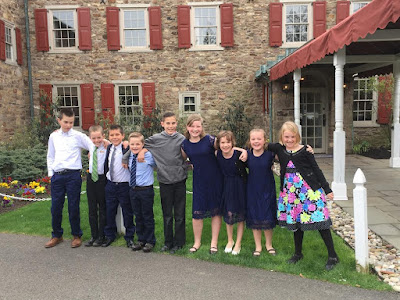 The Mass could not have been more beautiful.  The piano, the singer, and the priest's homily was just amazing.  The priest who gave the homily was a friend who knew the family for his whole life, and they also had the priest who married my Uncle Tom and Aunt Peggy at the Mass.  I'm going to recap the homily here so I can't forget. 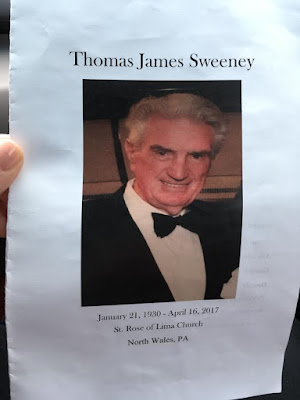 Father talked about how when he was a young priest, he and some friends, also priests, headed over to Ireland for a vacation and they decided to climb this mountain and have Mass in the chapel at the top.  The hike took 2.5 hours and by the time they were saying Mass, he was so hungry and thirsty that he was dying for the Body and Blood of Christ.  He asked God if it was okay to receive the Eucharist because he was more focused on wanting to eat and drink something than on receiving Our Lord, and then he realized that we should all be so hungry for the Eucharist.  Later on during his vacation in Ireland, he visited Our Lady of Knock on the Feast of the Assumption.  Little did he know, this was a big day at the shrine and they were pulled into hearing confessions and help at the healing Mass.  He said what struck him most about that day was the feel of the Irish hands he held during the healings.  They were all coarse and grooved and hard-working hands.

Years passed, and just a couple of weeks ago, he was called over to the Sweeney house to give the Anointing of the Sick to my Uncle Tom.  As he held his hands, he was instantly brought back to the days in Ireland.  My Uncle Tom and my Dad have the biggest hands I have ever seen.  They are strong and weathered and amazing.  Here's proof:

Anyway, Father held Uncle Tom's hands and could feel the years of hard work he had done to provide for his wife and their four sons.  He taught his sons how to build houses with him, just as he had taught my Dad back when he was 19 and a new immigrant.  Those hands had built remarkable things and molded remarkable lives.  As he finished with the Anointing, my Uncle Tom, who had been bedridden for weeks, whispered to him "I know it's not a sin, but I still feel bad missing Mass."  Father, remembering his Irish hike, was so touched that Uncle Tom still had such a great hunger for the Eucharist.  That's what makes us saints, he said.

1) He would ask everyone he met "Are ye happy?" (in his gentle Irish brogue) instead of "How are you?"

2) He gave the best hugs, freely, and held you as long as he could.

3) Whatever you had going on in your life, he would listen and respond with "Isn't it exciting?"  No matter if it was a trip to the convenient store (Wawa was his favorite) or a trip around the world, he was just so happy to be living life.  I think I want to be a lot more like him. 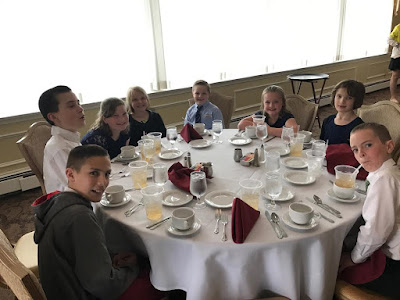 After a long, emotional, gorgeous day with the family, my sister and I headed back to let the kids swim, and then out to Dave and Buster's: 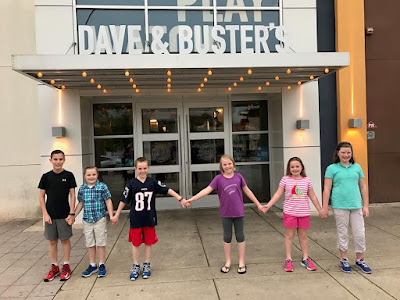 They had such a great time together and it was hard to leave on Saturday, but alas everything good must come to an end in this life.  It's all pools and Dave and Busters in the next life, I hear ;) 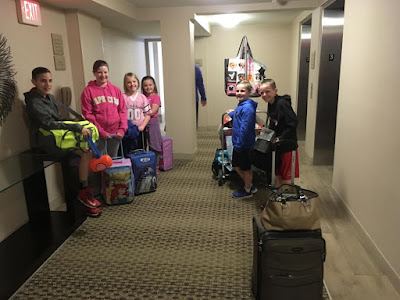 Back at home, Phil had not only held down the fort with Xander, Declan, Brendan, and the dog, he let them pick out their favorite meals and took them to the zoo and basically won Father of the Year. 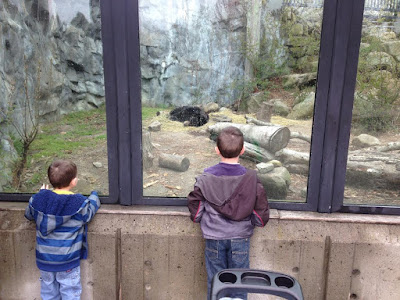 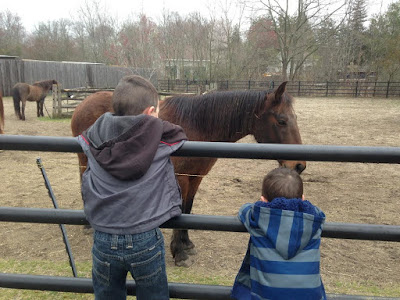 Declan still talks about the buffalo who pooped on the grass.  Big. News. 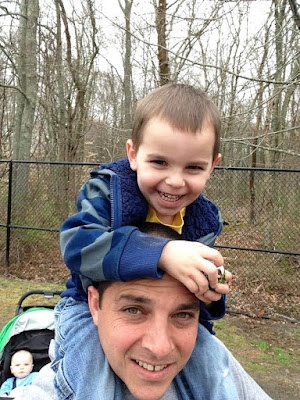 I didn't want to go on this trip without Phil and all the kids, but in the end it was so much easier not to have to work around nap schedules and bottles and diapers and strollers and car seats and night wakings, etc.  He knew this was the best plan and he was right.  Whatta guy.  Well, that wraps up our vacation week, and it's one I won't forget.  Go hug your family a little tighter xoxo.
"Thunk" by Colleen