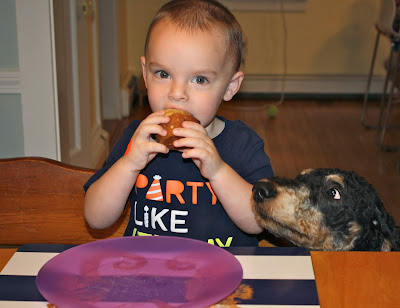 Brendan Joseph turned TWO (and so did Lucy Doodle Martin - they're practically twins!) 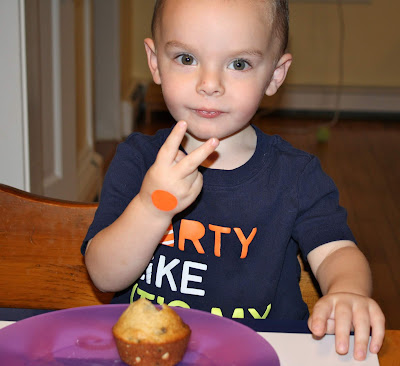 He is officially no longer a baby!!  Well, he's still our baby of the family, but it's toddler time now and that's my favorite childhood stage.  They're so sweet and funny and I just can't get enough. 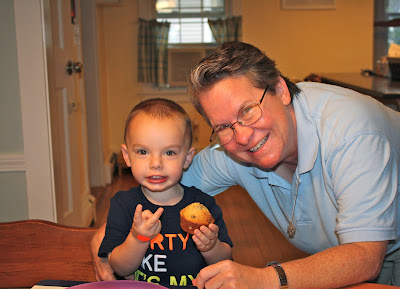 Phil's sister, Sr. Denise was visiting for the weekend and took us all out for ice cream the night before as part of the birthday celebration.  Brendan got chocolate chip and loved it. 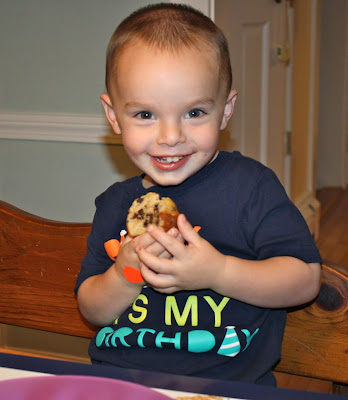 After a breakfast of chocolate chip muffins, eggs, sausage and hashbrowns, we went over to the playground because every day, the little man asks to go.  He has no fear and loooooooves being outside and sporty. 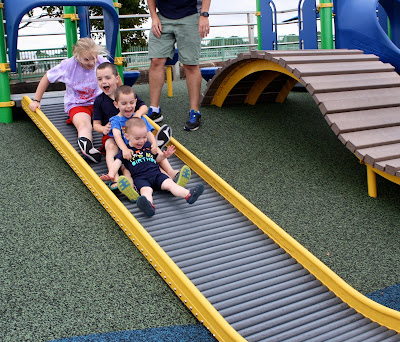 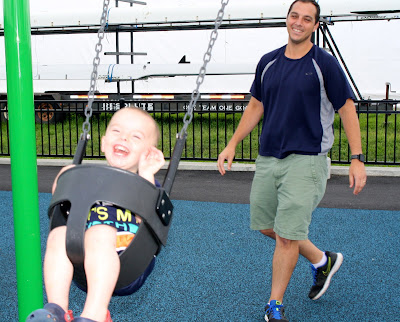 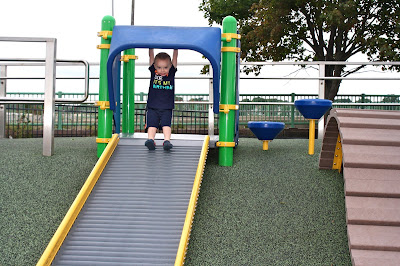 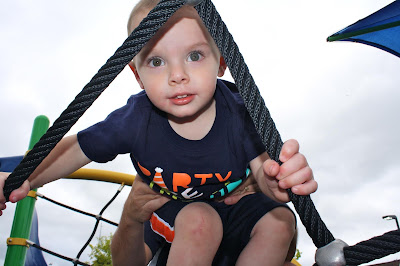 We came home for nap time and then I gave him a little present when he woke up... 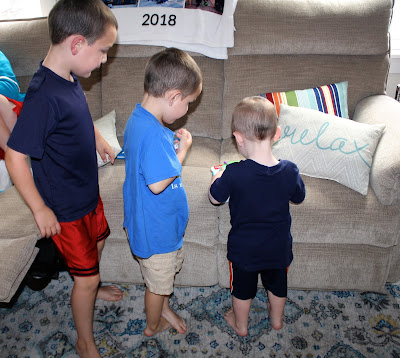 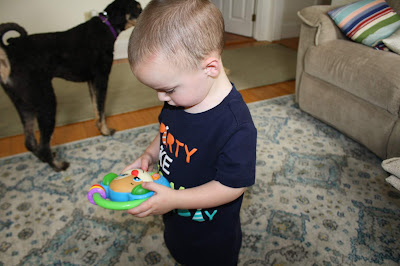 Phil gave me a little present too...flowers for birthing our son two years ago :) 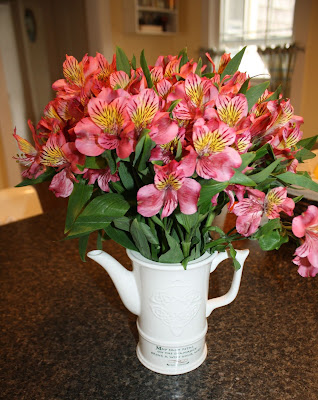 We had a busy day of soccer practices and games, but then got to celebrate with Brendan's godfather (his godmother just entered the convent) and family.  Godfather Bill gave him a Mickey Mouse toy (Brendan is obsessed with Mickey Mouse) and even put it together for him. 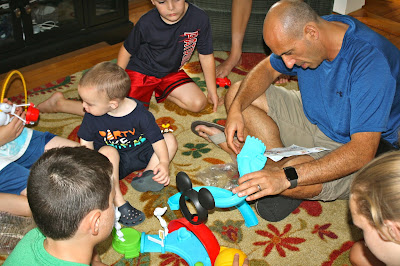 And then it was time for dinner and ice cream!  No cake, but Phil did pick him up a cupcake so he could blow out a candle. 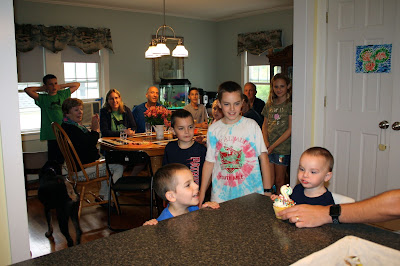 All those adoring fans... 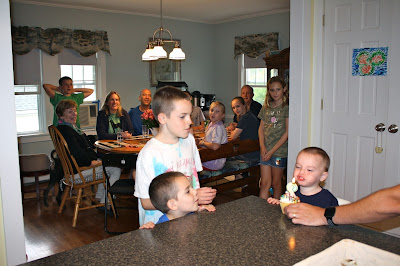 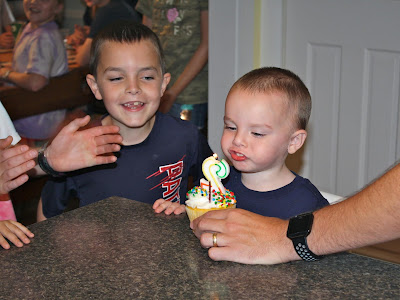 Love how he blows - very ineffective! 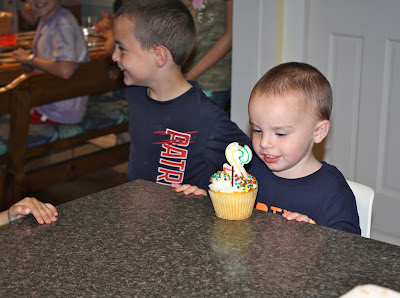 And then he promptly ate all the frosting. 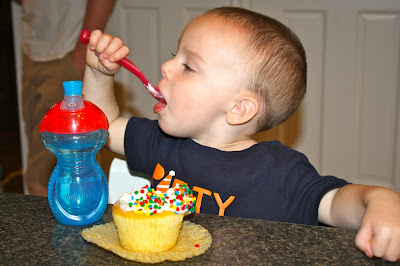 And asked for more.  The cake part remained untouched. 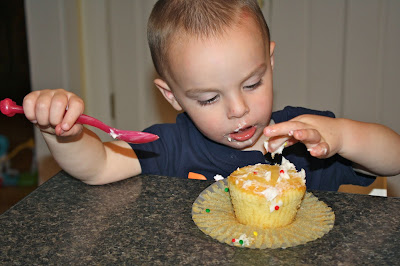 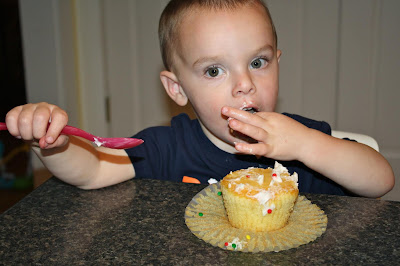 What do you get the seventh child (and sixth boy) for a birthday present?  We could not figure it out until I brought them to a trampoline park a couple weeks ago and he had a ball.  So now he has his very own mini trampoline to burn off some energy.  I can see a lot of fun (and fights) happening here. 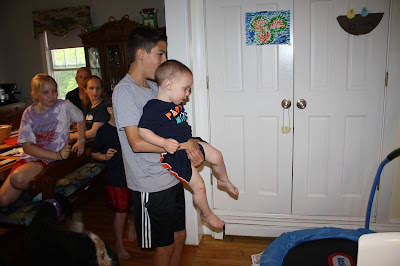 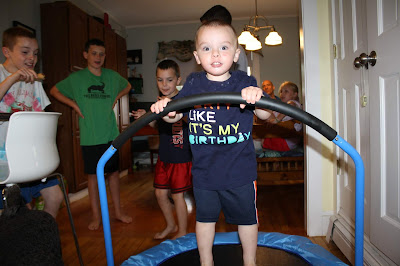 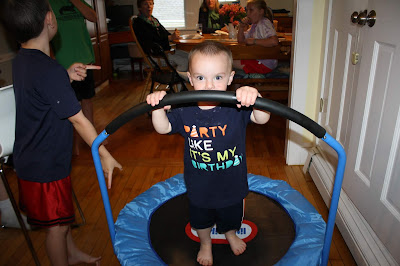 And just like that, two years have passed since my worst pregnancy and labor ended.  Brendan was such a difficult baby for the first 20 months of life, but now we all think he's just awesome.  He's sweet and funny and go-go-goes all day long.  He has such nice manners, asks everybody if they're ok, makes sure what they're eating is yummy (It's good?  It's good?), and is starting to dole out kisses and hugs on his own accord.  His favorite activities include playgrounds, shooting hoops, dancing, singing, putting on his shoes, counting to twenty, doing everything by himself, yelling at Lucy to stop licking him (he must be so tasty!), drinking from a big boy cup, and sleeping in a big boy bed.  He just wants to be one of the big guys, and by golly, he almost is.  I love watching him grow up and I feel especially blessed to be his mother.  We love you B!!
"Thunk" by Colleen