In Good Times and In Bad

Growing up, I looooooooved babies.  I was obsessed with babies, always trying to hold any I could get my hands on.  After hearing about my sister's medical school experiences, I dreamed of volunteering in a hospital to hold the babies who were born addicted to substances.  I babysat, worked in a daycare, and talked about how I hoped to have 12 kids one day.  I eventually grew up and met Phil, knew I wanted to have HIS babies, told him about my plans for a dozen kids, which he was cool with (!), and then we got married and started Natural Family Planning.

Why would we use NFP when we wanted a huge family, you might be asking?  Because I had just graduated with my MBA and didn't have a real job yet and Phil was about to start his Masters Program.  We still knew we wanted lots of babies, but just not quite yet.  It actually bothered me a lot that we couldn't start our family right away, that was the point of marriage, right?  I couldn't wait to become a mom!  We figured we would try to wait a year and then Phil would be finished with his Masters and would be able to get a job.

Guess who got pregnant one month after the wedding?

It was rough.  I felt like a failure.  I was so sick, and we were so scared.  We were living in my parent's house on Cape Cod, running the ice cream shop for the summer before grad school started for Phil.  That had been the plan after our wedding, to live on the Cape for the summer and run the shop, then move closer to Providence College in the fall so Phil could have a short commute to school and I could find an accounting job in the city.  We decided to keep the pregnancy a secret until we had an apartment and a job (for me) lined up.  We didn't want the "What were you thinking?" comments about the timing of this baby, as we already felt blindsided.

I went to the doctor around 8 weeks pregnant, and they gave me an ultrasound and everything looked amazing and we were starting to become so excited about this little baby.  I was a mommy!  Phil was a daddy!  Then I got hit with a bill for $700 for the visit, and that's when we discovered that I wasn't covered under my parent's health insurance anymore (because getting married kicked me off).  SO there we were, jobless, homeless, insurance-less, and pregnant.  Not quite the fairy tale we had hoped for.

Before we were married, I had interviewed at an accounting firm in Providence, and they called me back in for a second interview right before I found out I was pregnant, and then finally offered me a job in the fall.  I started working and Phil started going to school, and we had health insurance!  We moved into my brother's house temporarily until we found a tiny third floor apartment for cheap and began telling everyone our news.  We didn't have much, but we had each other.  Once that little baby boy was born a month early, I decided to quit my job to stay home with him (he needed physical therapy and I couldn't bear to be away from him).  We ran the ice cream shop again that summer, and lived in the apartment above the shop with baby JP.  Phil found a job teaching at a Catholic high school (he's still here 17 years later) and life has had it's share of ups and downs since!  We added six more babies to the family, I went back to work part-time and then full-time, we've moved ten times, and somehow we have always made it work with God's help.

Why are you telling us this story, Colleen?

I wanted to share this story because I think often about that window of time in our marriage.  We were so scared and had literally nothing but our love for God and each other.  We were young and maybe a bit naive but it all worked out.  What we thought we wanted and what we actually needed were taken care of better than we had envisioned.  God sent generous family members who let us live with them, He opened up that little apartment (through my parent's connections) for cheap rent, He found both of us jobs (through my siblings connections) when we needed them, and He allowed us to learn how to trust Him through our struggles.  We are currently going through a little "bump in the road" and being able to look back on harder times gives me hope that this will all work out somehow.  I'm praying there will never be a tougher time in our marriage than we have already experienced, but I'm so glad we got to go through it together because it literally made us stronger.  Am I still the same young girl who wants 12 babies?  Not quite!  But I'm happy and thankful for my seven babies and for all the broken roads that led us here.  Said the saint whom our first-born was named after: 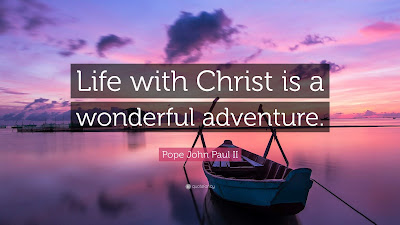 In good times and in bad, we know where to turn...towards each other and then up.