It's All About the Children

And since I have seven lovely cherubs, I am linking this family update up with Kelly and her 7 Quick Takes.  Happy Friyay!!

Should we go Oldest to Youngest, or Youngest to Oldest?  I'm someone who always lists my kids ages from oldest to youngest (yesterday I heard a mom say her kids were 1, 3 and 4, and thought "I would have said they were 4, 3 and 1") so Oldest to Youngest it is... 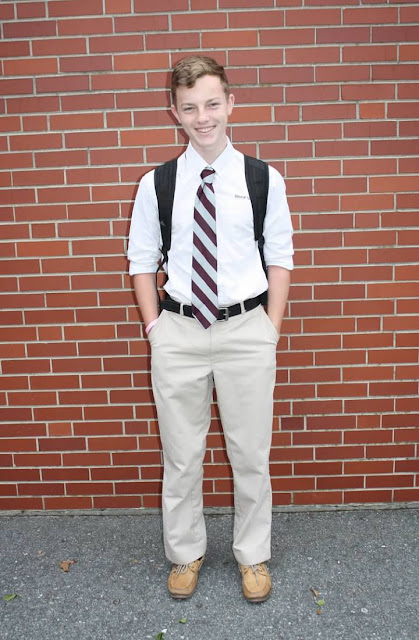 JP is a Sophomore in high school and is becoming manlier by the minute.  He is playing JV Soccer again and still working on weekends at Market Basket, where he started as a Bagger but they just asked him to start training as a Cashier.  Moving up!  My younger sister said he'll be great at that job because he was a very organized and detailed 8th Grade Class Treasurer.  Takes after his mama.  He is considering not running Winter Track and joining the Debate Team instead...the boy does know how to argue.  Takes after his papa.  He's in all honors classes and hoping to get all A's this year since this is when it starts to counts towards his high school GPA.  We are all hoping his smarts lead him to college scholarships because there's no way we can pay for it!  I know college is a few years away, but every mom of a high school graduate tells me how fast these years go.  He has his heart set on Franciscan and wants to be an Orthodontist. 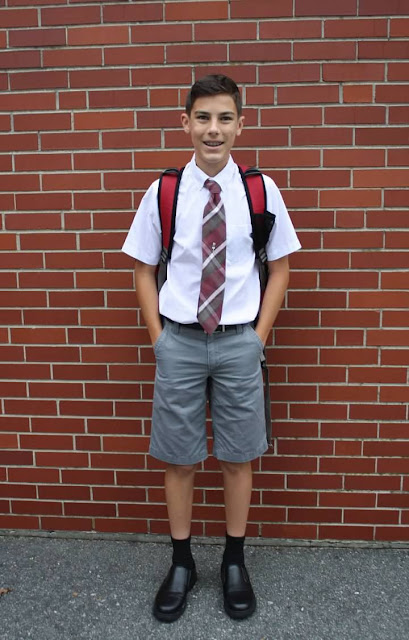 Andrew is in 8th Grade and is the Class President.  He played both basketball and golf (for the first time) this summer and is now in soccer season.  He's already looking forward to basketball again this winter, and I need to sign him up for a few races this fall because he was winning his age division all last spring.  The boy is fast - unlike his parents!  He's a hard worker in school, and does what it takes to get good grades.  Andrew seems to be relishing his role as a big guy on campus but has been wanting to get to high school already for the past few years.  He's always been friends with older kids and can't wait to get back to playing sports with them again. 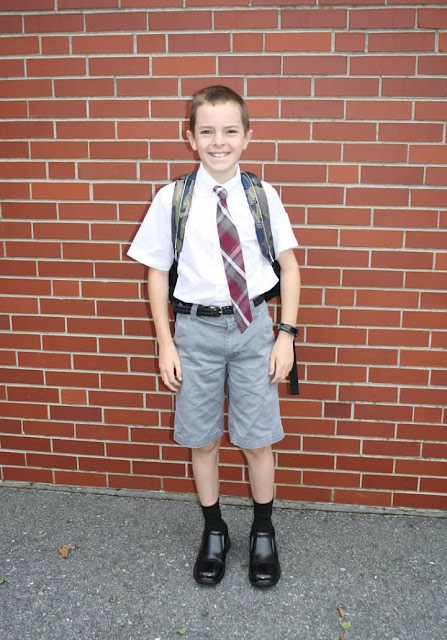 Eamon has started Middle School this year, being a big 6th grader now!  He plays alllllll the same sports as Andrew and methinks he is even a little more athletically-inclined.  He's a great student who is diligent with his school work and has no trouble with organization.  We always call on Eamon when we need a helper because he responds so willingly.  He is just like his Dad in that he never wants or needs anything and is happy with whatever he has.  This trait, of course, makes me want to buy him all the things!  Eamon has really turned into a bookworm like JP and can be found with a ball or book in his hand at all times.  Seriously, at all times. 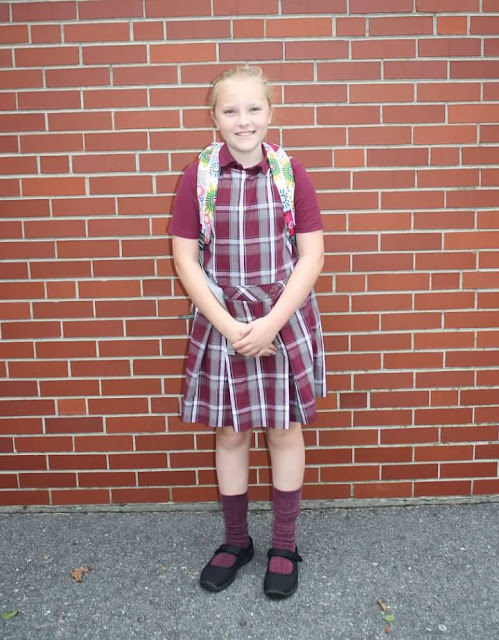 Maggie is in 5th grade and has a new teacher that she adores.  She decided to retire from soccer this year and is just continuing with swimming.  In her spare time, she loves to read and ride her bike.  The girl also looooooves food and wanted to be a baker for a long time before recently deciding to be a nurse.  I brought her to the ENT about her preauricular pit that got infected, and they are going to surgically remove the sinus and close up the pit.  While she is out for that surgery, they are going to remove her tonsils as well since she has been so prone to strep infections.  She is equal amounts nervous for the surgery (still to be scheduled) as she is excited for the ice cream diet after surgery. 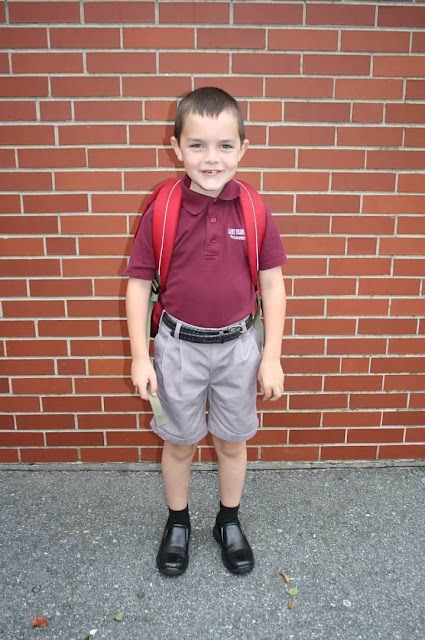 Xander is in 2nd grade and will make his First Communion this year.  Yippee!  Xander started piano lessons this summer and used his birthday money to buy a (used) keyboard that should be arriving today.  He's very happy with this new activity in his life and tells us how much he loves piano and swimming lessons, which also start up again this week.  Like Maggie, he looooooooves food and wants to be a baker.  He is definitely our best eater in the house, saying things like "chicken legs are way better than pancakes" to which all the other kids disagree. 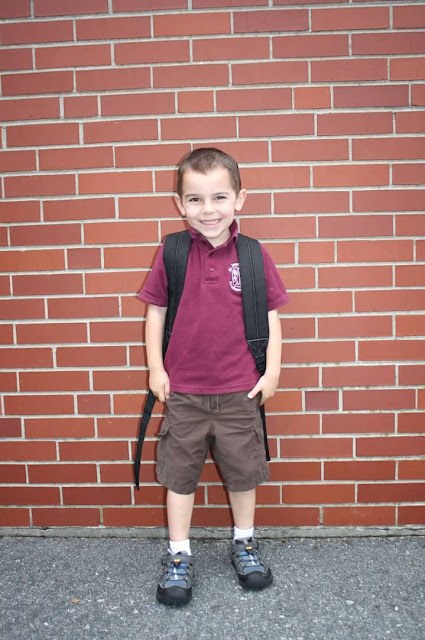 Declan is in 4 year old Preschool.  He kept saying all summer that he didn't like school, but then after his first day said "I like school!".  Great, buddy, because there's no other alternative!  It's so nice having preschool through 8th grade in one building, and I can't wait until Brendan starts going next year!  Declan is starting soccer tomorrow, which reminds me that I need to find a pair of cleats that fit him!  Should be easy since all our kids played soccer at age four.  It's such a cute program, with British coaches that run drills (games) for a half hour and then a scrimmage for another half hour on Saturday mornings.  Declan is a shy kid but loves his little buddies at school, especially his "girlfriend" Abigail and his "boyfriend" Alex (he gender identifies all his friends, we're working on it!) 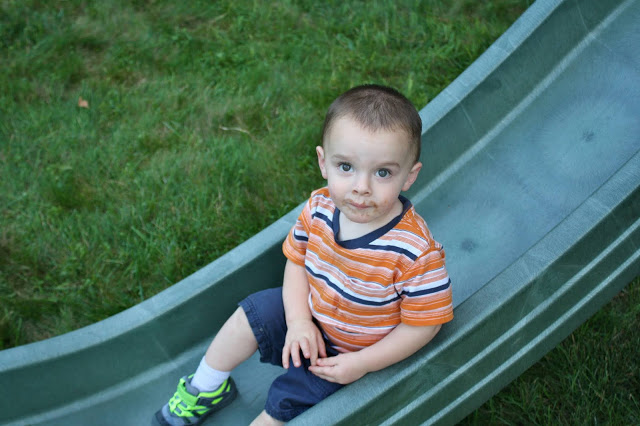 Brendan is 2 and in his last year of home daycare with his awesome Vavo and Vavu who spoil him like their own grandchild.  He is very opinionated and verbal and not afraid to use it to get what he wants.  His current favorite things include listening to music, dancing, shooting hoops, and asking for food but not finishing it.  He always wants juice (which we try not to keep in the house) and reminds us of Buster from Arrested Development.  If you give him one of anything, he will always ask for another one for Declan.  It's so sweet.  Brendan sleeps in a big boy bed now and transitioned really easily from his crib (our secret is to always do it before they turn two).  The next big boy steps are taking away the pacifier when he sleeps and potty training before preschool starts next year.  Those are future Colleen's problems, though!

Have a happy, cooler *fingers crossed* weekend everybody!!
"Thunk" by Colleen