Conway, New Hampshire and My Baby is Three!

At the end of the spring, we decided to plan ahead for a little summer family getaway to New Hampshire.  We wanted to take the little three boys to Story Land (next post!) and we work with a friend who has a rental house in Conway.  Easy peasy!  Except!  Trying to squeeze in a time between summer camps, working, an internship, a math class, a basketball league, swim lessons, you get it!  We settled on a nice four nights in the middle of August, and then had to cut it short for Freshman Orientation.  Ugh.  Oh well, three nights was actually wonderful.


We convinced Haley to come with us for two days, and headed into North Conway on the day of arrival.  We just HAD to go to Zeb's which was the most packed store I have ever been in (well, our ice cream store on the Cape was pretty packed every night!) and we hurried to grab what we wanted so we could get out of there. 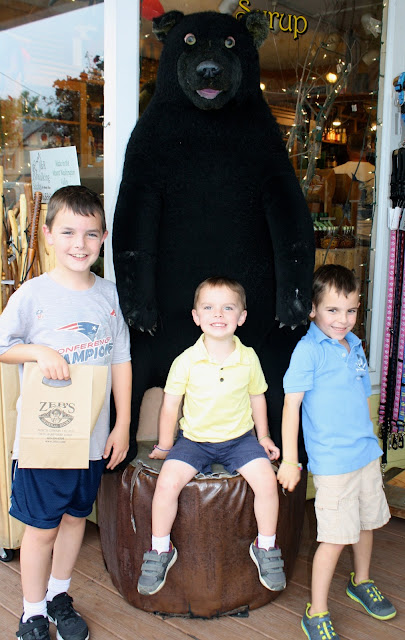 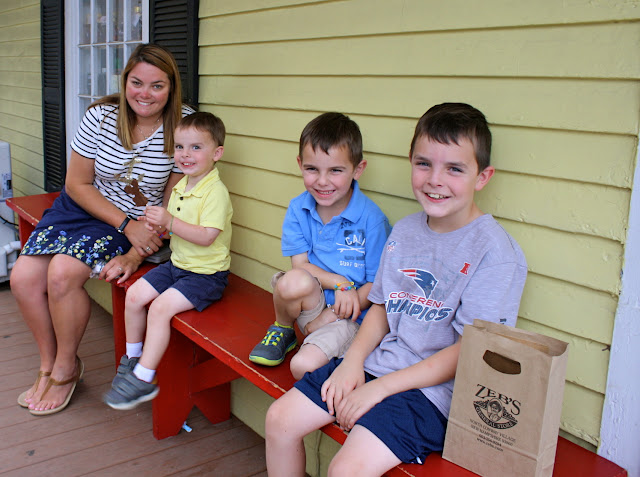 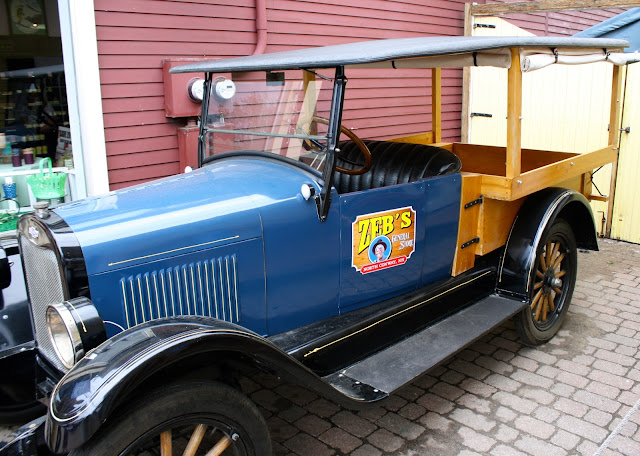 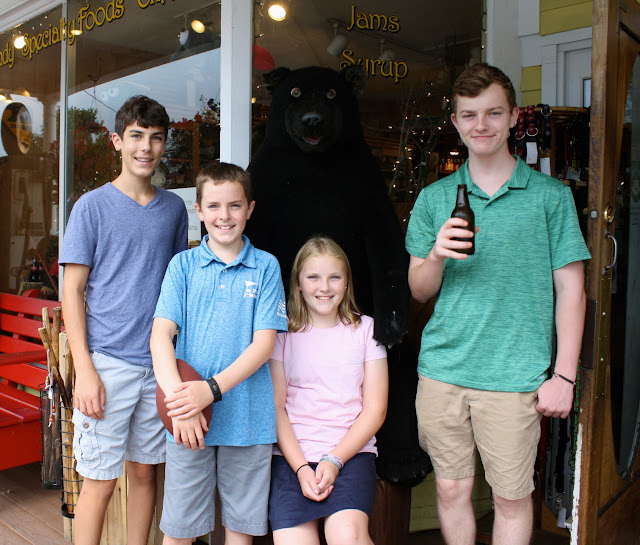 We had some fun in the toy store... 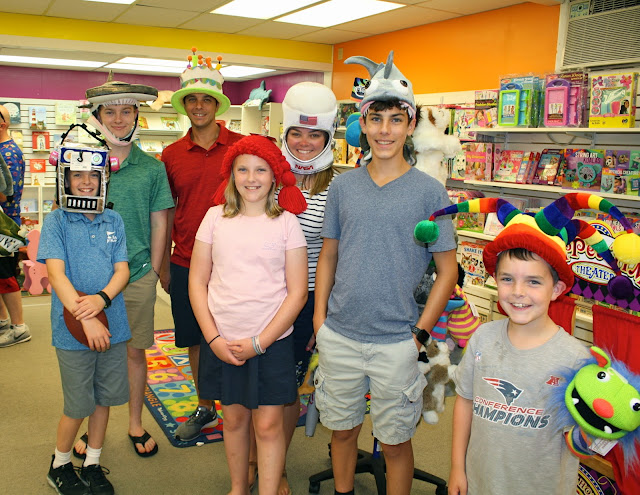 ...then went to Mass at Our Lady of the Mountains where a faithful priest gave a brave homily about things Catholics should believe (but many shy away from).  Then we went to dinner at the 99 Restaurant (because when the Red Sox win, kids eat free!) and home for a game of Apples to Apples and bedtime.

The next day, Phil and I headed off to Story Land with the littles while Haley took the oldest four hiking up Mt. Cranmore and then to swim at Echo Lake.  They ended in town to hang out before meeting us back home for dinner and cake on my baby's birthday eve. 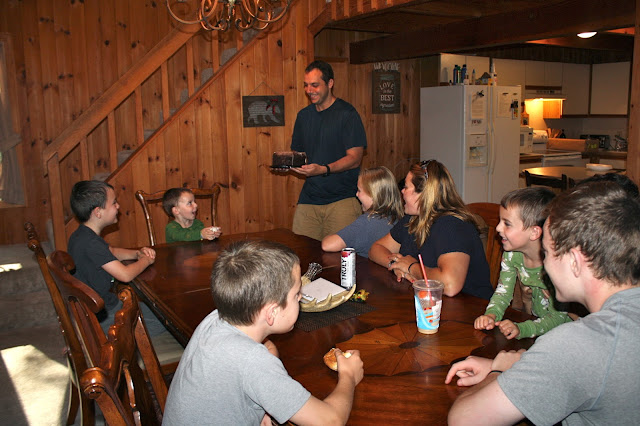 All he asked for was a chocolate cake with chocolate frosting.  Done. 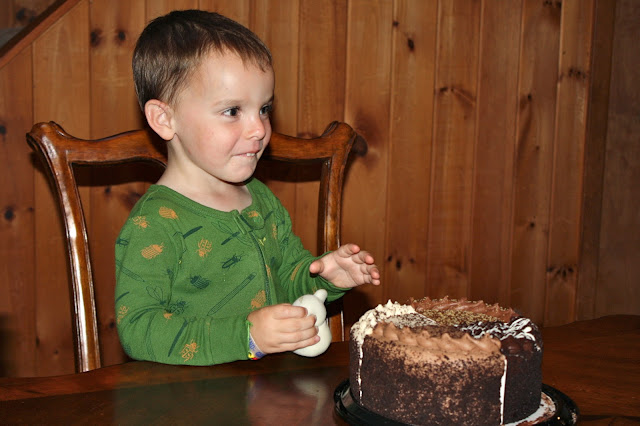 When you're three, the bigger the better when it comes to presents ;) 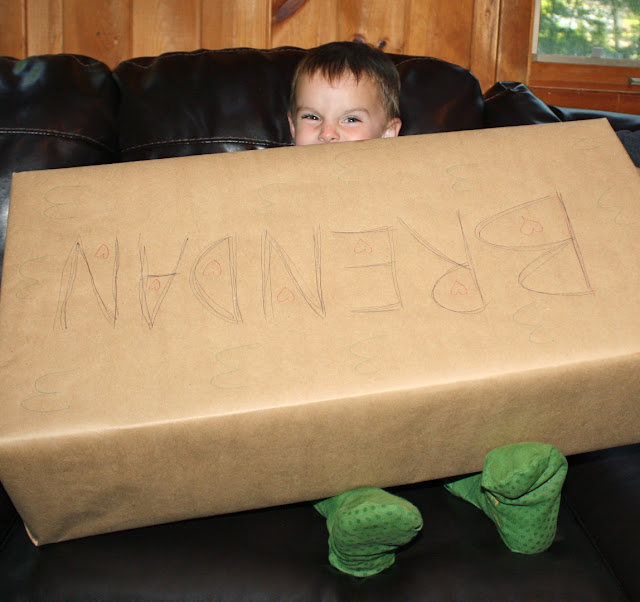 Also, Marvel rules at the Martins.  You could say they think they're Marvel-ous.  Too much?  Ha! 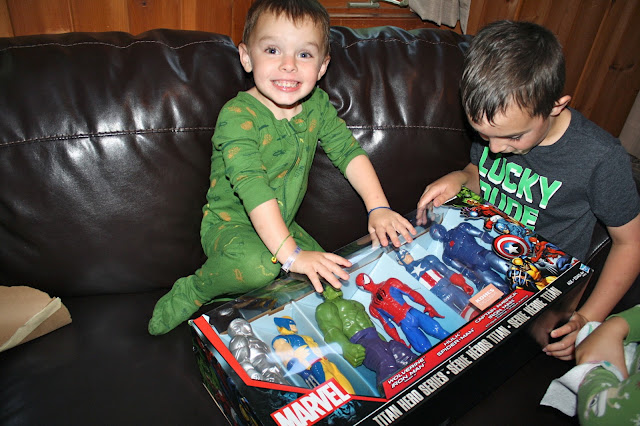 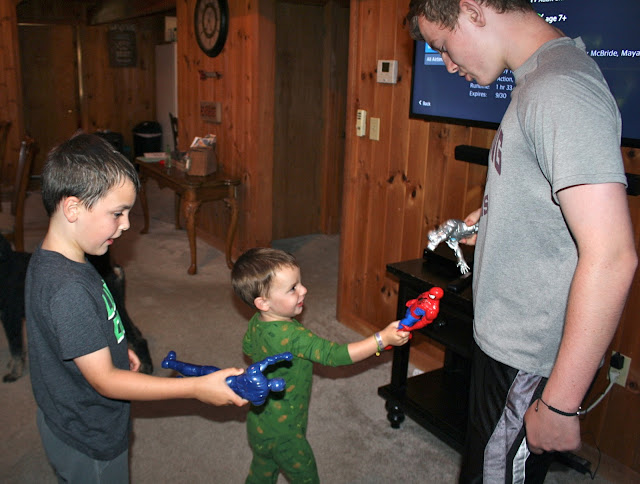 On our last day there, we spent the day at the Saco River, which is accessible from the rental house and had loads of fun.  After nature called, of course.  If you have to pee, do it on a tree! 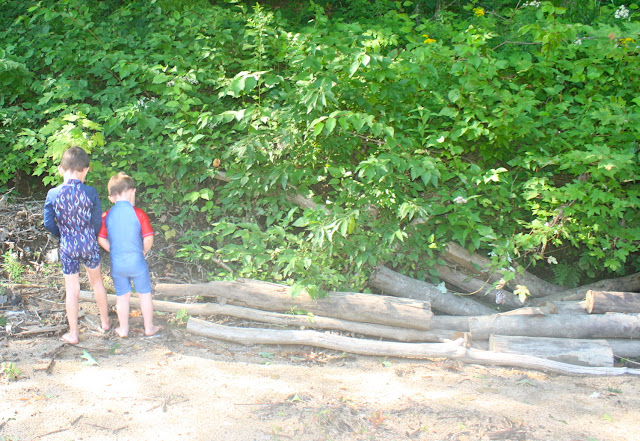 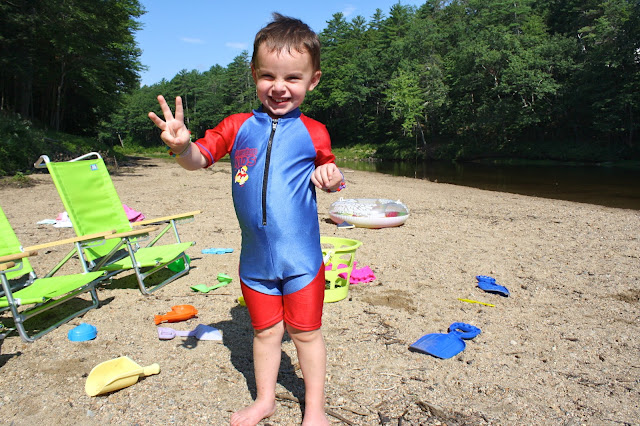 Phil and the {actual} big boys went to rent some kayaks while I played with the others on the river's edge.  I have to admit that I was a little nervous being at the river by myself with no cell service, not knowing where Phil had gone to rent the kayaks or how long he would be gone.  But I survived like the modern-day-anxiety-ridden-without-phones person that I am.  Just call me St. Colleen. 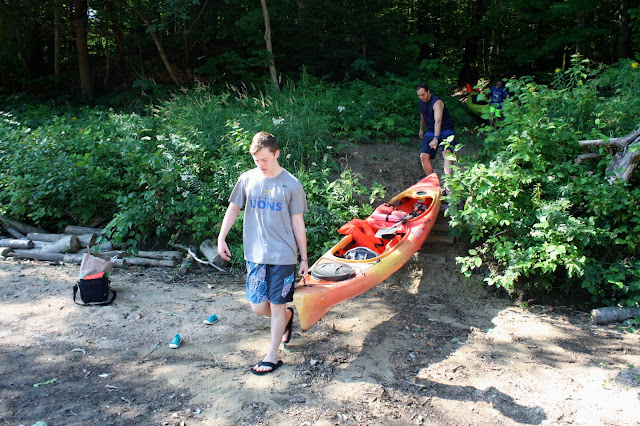 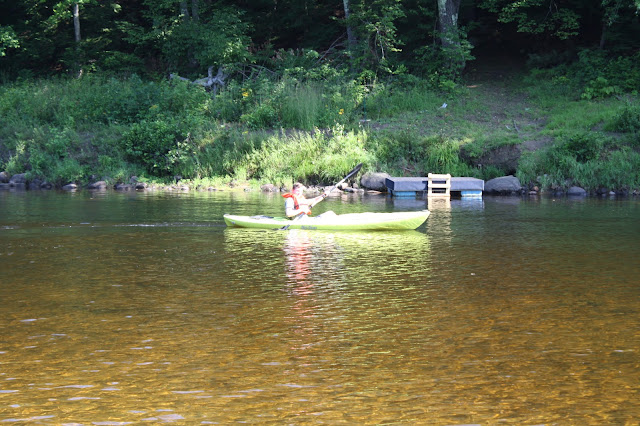 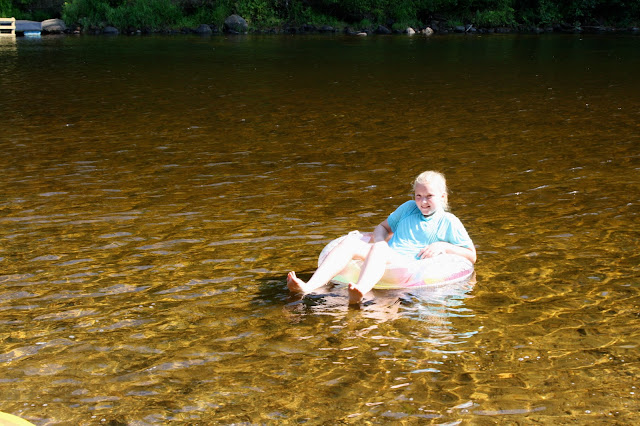 We had plenty of tubes and two kayaks, and while the river looks brown in these photos, it was really shallow and clear and perfect! 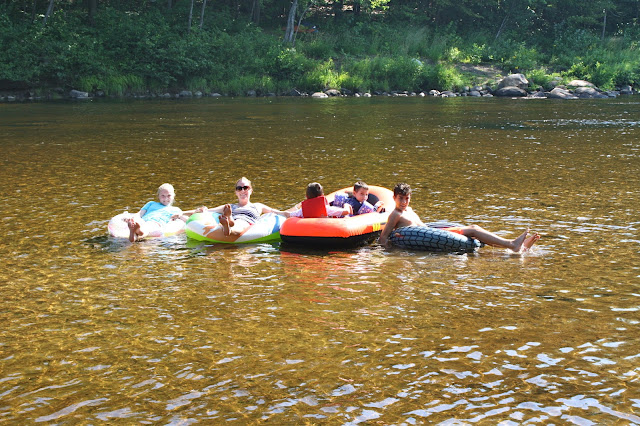 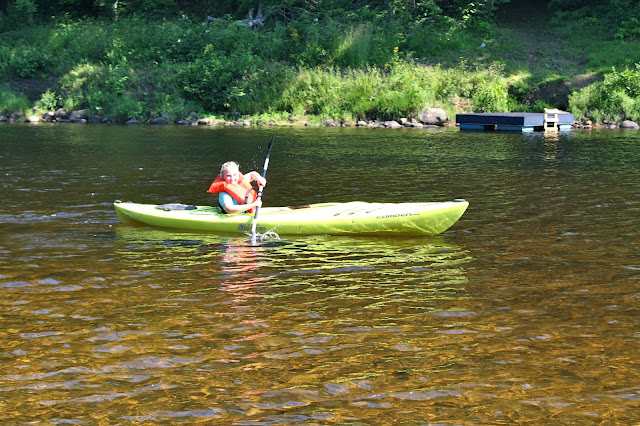 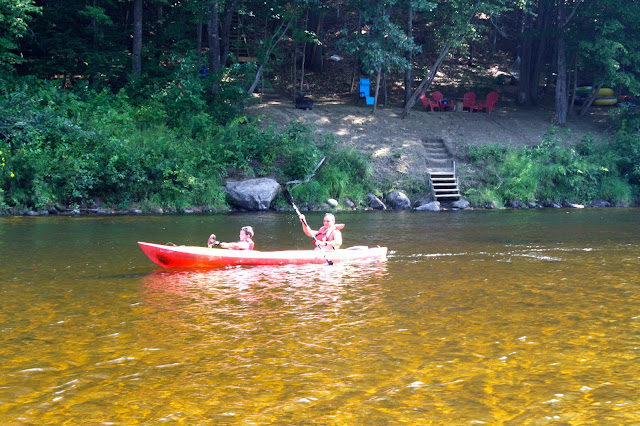 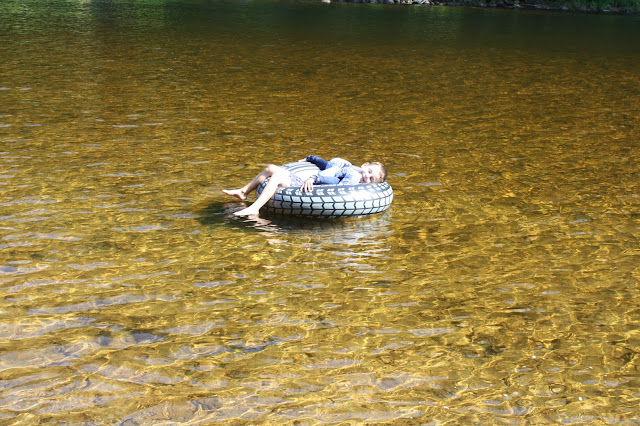 Declan (age 5) LOVED floating down the river and kayaking.  He is such a good sport and fun to bring on adventures.  Brendan was pretty happy to stay on the shore and occasionally get in a kayak with one of us.  Xander (age 8) was more of a floater/refuser to do any hard work. 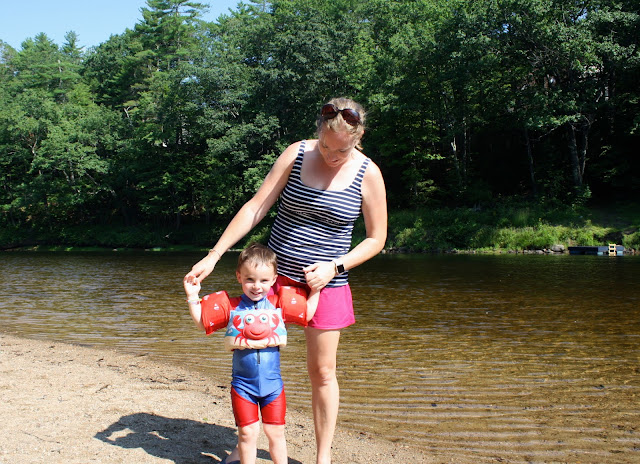 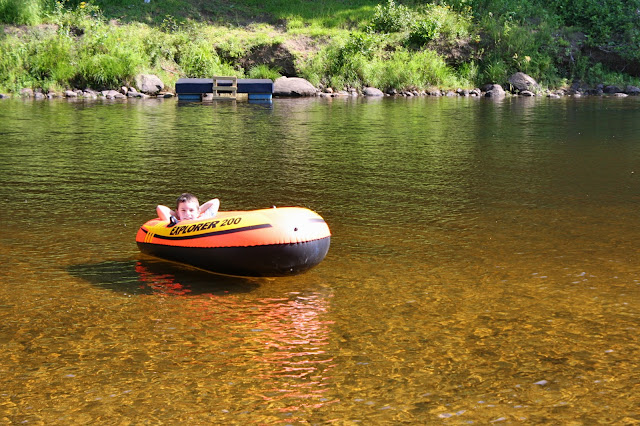 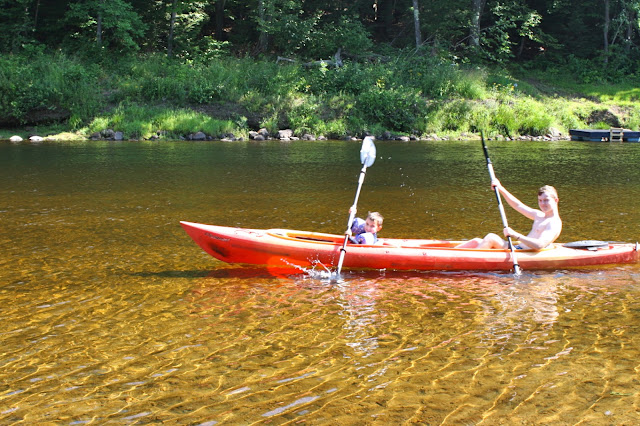 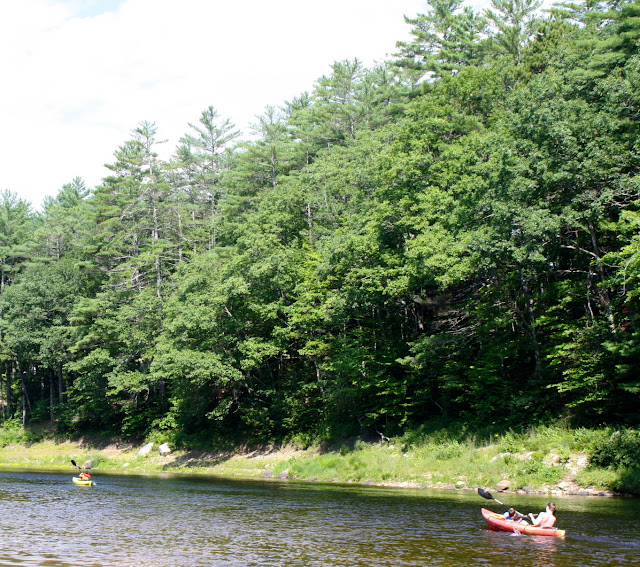 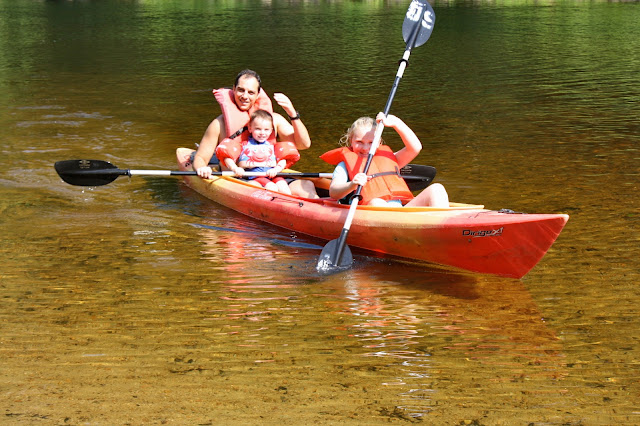 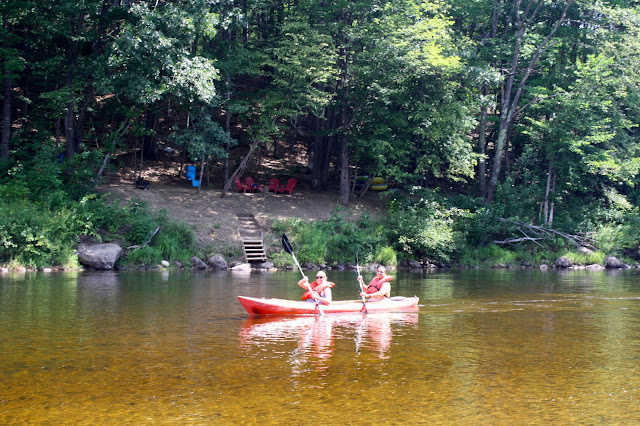 Phil and I were even able to go on a quick trip together...fun!

Maggie was all about the river life, she is such a fish and plays in the water all day.  The big boys had adventure in their hearts and minds, and while we were kayaking, we saw a rope hanging from a tree on the other side of the river bank.  I suggested to Phil that the boys try it out, and Phil was thinking the same thing.  The boys couldn't believe their luck!  They swam over and made the best memories jumping off this death trap rope swing!

We were all tired after being in the sun, and went home to shower and chill and then had another yummy dinner on the grill, followed by ice cream cones for the birthday boy.  Hey when you're the baby, you get celebrated a lot (despite the world's concern of not getting enough love and attention)!  Then we surprised the big kids with a movie night of one of their favorites. 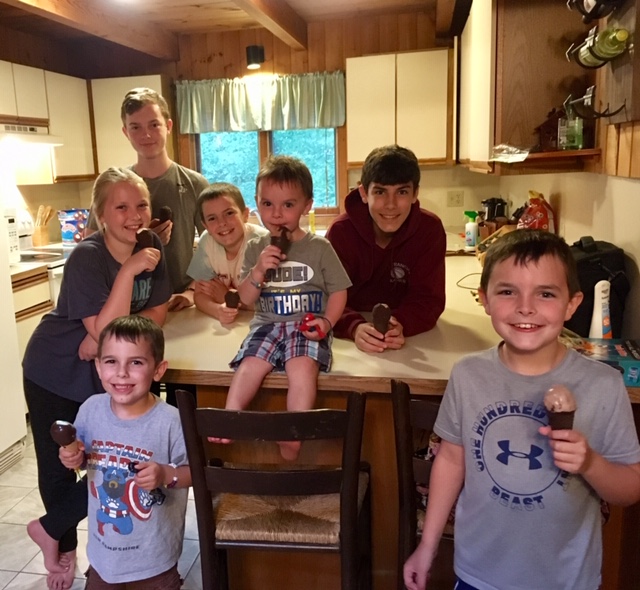 Oh Brendan, I can't believe that you are three and wearing underwear, and ready for preschool soon.  You are quite the handful and yet so charming, always giving the BEST hugs and laughing at all the potty humor jokes your brothers tell you.  You are the life of the party, love to dance, and will go anywhere with anyone.  Which sometimes gives your old mom a heart attack.  You love excavators (duh), dinosaurs (duh again) chocolate (me too), and Blippy (but why?).  You try any dips (ketchup, ranch, salsa) , which is different from all the other kids, and always ask for a snack "from the pantry" - where all the processed food is kept.  You ask us all how we are feeling, and are genuinely concerned when we sneeze or cough.  You are scared of the weird sounds Xander can make with the piano, and your favorite insult is telling people they smell like "beef and guac".  I don't even know.  You are sooooo excited for school, after being king of summer camp this year.  You love accessorizing, and always need 2 or 3 bracelets on at one time.  You are beyond intelligent and we all love you 3000.  Thank you for being ours. 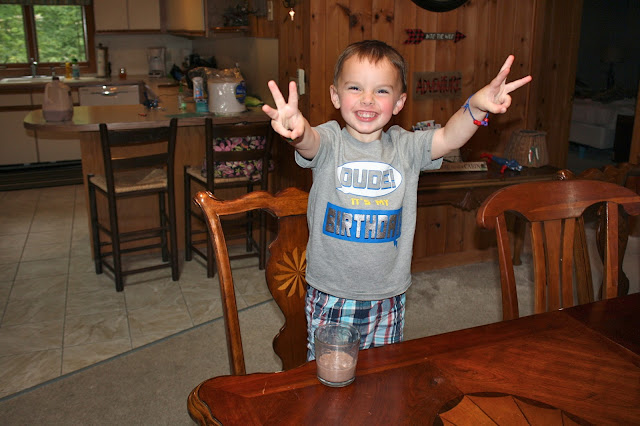 Next up... our Story Land trip!
"Thunk" by Colleen