The Journey to Catholic Familyland: A Fun, Faith-filled, Family Retreat (Part One)

We just drove back from our family retreat to Catholic Familyland in Ohio, and boy are we tired!  But we have also been spiritually fed, bonded together as a family, and made memories to last a lifetime.  I have so many photos and stories to share, that I'm going to break this up into two parts.  Tonight I will focus on the journey that led our family to Catholic Familyland. 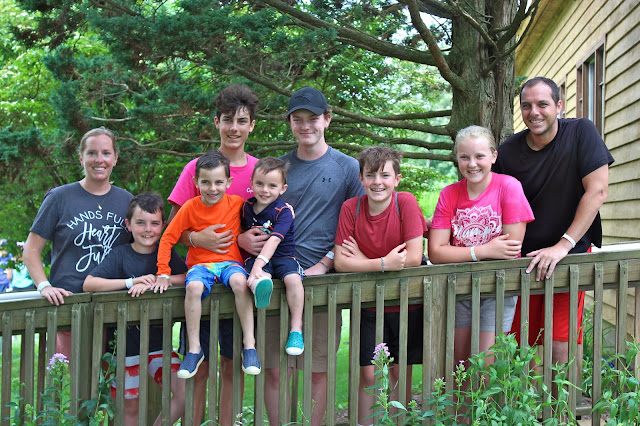 We first heard about this magical place from Phil's brother, Bob, and his wife Larisa, who have been going there for years with their eight children.  It always sounded a little corny (I mean, can a marketing team help them out with a new name?) and involved camping - not bare necessity camping, but also not glamping, which is the only way I would have considered camping in the past.  My idea of a nice family vacation is a big house on a beach.  Not the mountains, not the woods, not in nature.  And most definitely not in a cabin with no running water, toilet, or shower.

But then the pandemic hit.

And we were all stuck inside our house for months on end.

And all our normal summer events got canceled.

And we suddenly had all the time in the world but were so sick of the world, that we wanted an escape.

We were talking to Bob and Larisa, who mentioned what week they were going to Catholic Familyland (or "Church Camp" as they refer to it) and the Holy Spirit opened my heart just enough to actually entertain the passing thought of "I wonder if we could ever do that?"

I started researching their Holy Family Fests, looked at a couple blogger's reviews, casually mentioned it to Phil, and began envisioning the idea of a week roughing it in Ohio.

Guys, when I tell you that it took a literal PANDEMIC to ever let me consider doing something like this, I am not kidding.  I felt so depressed about the events going on in the world, so disheartened at seeing people violently debate politics, mask-wearing, and BLM, that I just wanted to go somewhere to deepen my faith and show my kids that not all people are crazy.  Well, some may say that Catholics are crazy, but I will be happy to be in that crazy camp anytime.

I had to talk Phil into going, which was ironic because he is the theology teacher who would normally love to go camping and/or on a retreat.  But to his credit, he knows me best and was worried that all of my anxieties about the trip might get the best of me as it got closer.  I assured him that I felt STRONGLY called to do this with our family, and he happily went along with it.  We planned to drive from Massachusetts to Maryland to visit his parents for a couple days before heading to Franciscan University in Steubenville, Ohio to show the kids our alma mater. 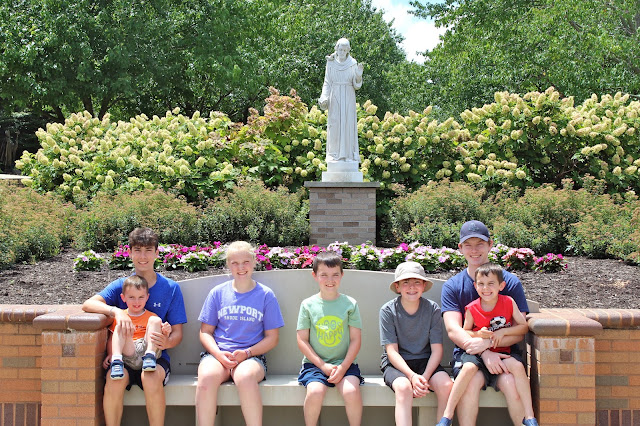 After spending a little while on (an eerily quiet and empty) campus, pointing out where we used to live (shoutout to the projects!) and where everything else was located, we headed to do some grocery shopping for the campsite.  $397 later, and we had breakfasts, lunches, snacks, and drinks for the week.  We didn't need to bring food for dinner because we purchased the meal plan. 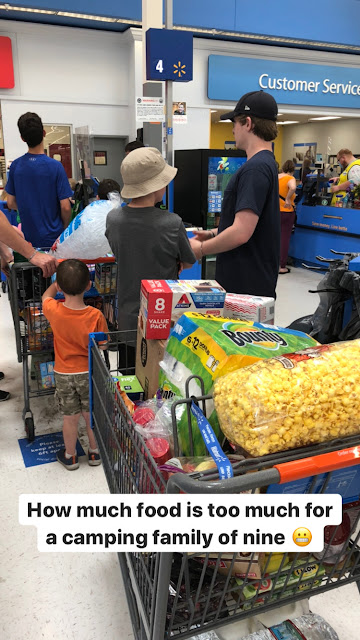 We drove the 20 minutes to Catholic Familyland (it's located in the Diocese of Steubenville!) and settled into our cabin quickly.  Another brother-in-law had offered his six-person tent to us at the last minute, and it was definitely a godsend!  Our oldest three boys and their two oldest boy cousins all slept in there each night.  The cabin has "room" for nine, but it was tight.  Having the oldest three camp outdoors gave us much more room to spread out (aka I slept in the full bed and Phil slept in the loft).  We met up with Larisa and the kids, who were waiting on Bob to arrive with their camper. 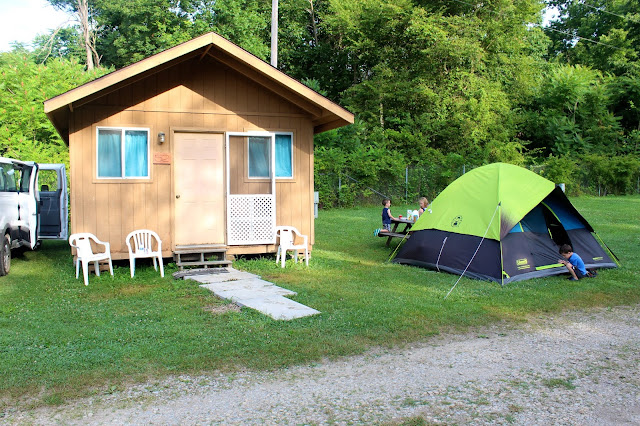 Bob and Larisa had quite the ordeal in getting to the camp this year.  Their truck had died on the way to the camp (with all 8 kids in it and a full camper towing behind them) but they were able to call us just as we were starting our drive from Maryland.  We drove to their house to pick up their big van, which Phil drove...which meant that I had to drive our big new van for the first time.


Then the GPS directed us through the most mountainous route I have ever been on.  We just kept going up and down these windy mountain roads in the world's biggest vans.  I definitely felt like I was being tested - I had finally made the decision to go camping, and then had a bunch more anxiety-filled things thrown in for good measure.  But, I did it!  What doesn't kill you makes you stronger, right?  Before we had left, I kept reiterating to the kids that we were all going to try to be as OPEN as possible to God's Will and all of the experiences ahead of us at the camp.  I just didn't know it would start on the way there!  Here's the text exchange between my sister-in-law and me: 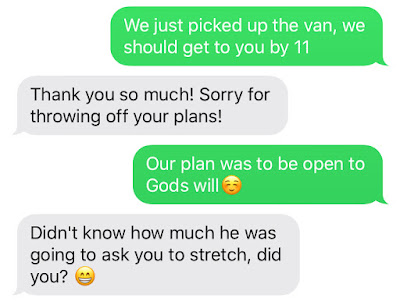 Once we brought the van to them, they drove to a car dealer and bought a new truck that they had been planning on doing eventually anyway.  Then there was a lot more waiting around for Bob to get the paperwork done, the old truck towed, a new hitch for the camper, and finally arrive at the camp at 9:30 at night.  What a trooper.  A lot of families shared their stories of hard travels, which the camp leaders were not the least surprised to hear.  "The devil doesn't want to make it easy for families to grow in holiness" was a sentiment we heard over and over.

But the next morning was Sunday, and after a horrible night's sleep, I informed Phil that we were going to stay in the hotel for the rest of the week.  I was serious.  We went to Mass, and it was beautiful, then we had lunch and I napped with the little kids before deciding that I could indeed try and stay another night in the cabin.  The first night sleeping anywhere new is hard, right?  That afternoon we checked out the place and all it had to offer...