Declan and His Adverse Side Effects from Singulair 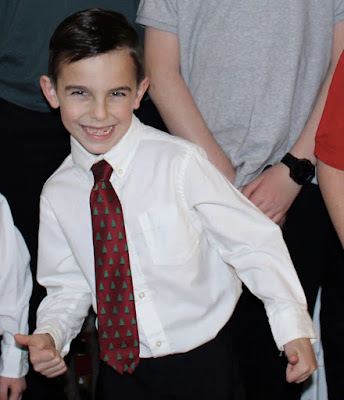 Declan loves to be on the move, like most little boys, but even especially so.  He goes on runs with us, is always jumping on the trampoline, and literally climbs the walls in our home.  We are always amazed by his strength and stamina.  Even though we have six other kids, I would say Declan is the most active of the bunch.

Right before he turned three, Declan had a couple of "episodes" where he would be running around like his crazy self and would come over to me and say "I can't breathe" or "I don't feel good".  We would hold him and try to get him to breathe slowly and calmly, but he was clearly struggling to do so.  My husband had childhood asthma, and since Declan's three-year-old physical was coming up, we made sure to mention it to his pediatrician.  He was sent to see a specialist from Boston Children's Hospital, who asked a lot of questions, did some blood work (I think?), and made him run around up and down the office halls to see if he would react.  He didn't, but she obviously believed us that he had a few scary episodes, and explained that although she couldn't technically diagnose him with asthma because he was too young to do the breathing test, she thought that's what he had.  His dad having had childhood asthma also aided her decision.  She prescribed him an inhaler to use before exercise and also put him on a daily dose of Singulair.  I don't like taking medicine, and certainly didn't want my little guy to be on a prescription (for life?) if it wasn't absolutely necessary, so I asked her if it was safe and she assured me that it was very safe, and it helped with both asthma and allergies (he's also allergic to dust and cats) so he should definitely take it.  She told me that with all of my other children being healthy, we were lucky that this was the biggest medical issue we had.  She really couldn't get over that only one kid out of our seven would need a prescription, she made it seem like it was so commonplace for kids to be diagnosed and on medication.  And I'm sure for the cases she sees at Boston Children's, she's justified to feel that way, but I like to think a healthy child should be the norm and not an oddity.

Anyway, we got two inhalers, sent one to school with him, and kept one at home.  I think we used the inhaler once, when he was having trouble breathing after running around.  It's very hard to give a three-year-old an inhaler treatment before exercise when you have no idea when they will run off to play and start "exercising".  But the daily dose of Singulair at night seemed to be doing the trick and he took his "pink football" pill faithfully each night.

Fast forward three and a half years, and Declan was still taking Singulair daily.  As a student, I think his teachers would describe him as quiet and shy, but at home, he is loud and has a lot of quirks.  We always assumed that's just Declan.  He has always been a "nervous nelly" and gets visibly anxious and uncomfortable with making decisions and eye contact with strangers.  He had a period of time when he was stuttering, and Phil and I worked hard to make sure we were giving him our full attention when he was talking to us so as to help him get his words out in his own time manner.  In a house full of kids, little things can go unnoticed, but Declan's "things" were very noticeable.  He started having facial tics, where he would open or manipulate his mouth a certain way, or stretch out his neck, or roll his eyes.  He moved his eyes in this strange way so often that we had his vision checked because I thought he might be having trouble seeing.  Whenever I asked him why he moved his face that way (after a tic) he would say "I don't know,  I just have to."  We chalked it up to Declan being an anxious kid and tried extra hard to give him more hugs, attention, anything that might seem to assure him. 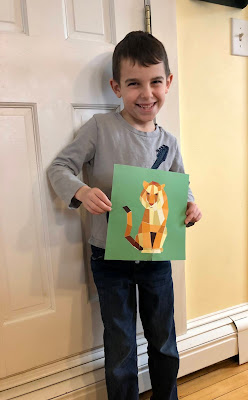 More mornings than not, Declan would come into our room and tell us about his dream in such detail and for so long, that I was sure he was just making it up.  How could anyone always seem to have dreams that they can remember like that?  He has also developed an intense hatred of anyone who sniffs around him.  It drives him up a wall and he screams at them and cries and runs off because he can't stand it so much.  All of the kids have learned to tell him to cover his ears before they sniff, then he asks "finished? finished?" until they give him a thumbs up and he uncovers his ears.  It's actually very funny to watch his little brother have enough foresight and knowledge to give Declan a heads up before he needs to sniff.  But Declan's reaction is not funny, and we have tried everything we can think of to help him get over this...lots of go sit by yourself until you can collect yourself, try to give it up for Lent or New Year's resolution, calmly explaining that people sniff by accident and they are not purposefully trying to make you upset.  Nothing has worked.

Over Christmas break, Declan's Singulair ran out, and for some reason, the pharmacy didn't have the next one ready for pickup (we were on a monthly refill plan).  We called the pharmacy to get the prescription refilled who said they had to call the doctor to okay it.  Then the pediatrician called us at 7:30 at night (she's great) to make sure that we knew that the FDA had issued a Black Box Warning (their strongest warning) on Singulair.  We did not.  She said there have been adverse side effects associated with it, and she was okay with us refusing the prescription and just using the inhalers as needed.  Of course, we quickly googled side effects to find:

Declan has bad/vivid dreams, he is anxious, he is irritable (nose sniffing), he is restless (always needs to be doing something, playing something, eating something), he occasionally stutters, and he has UNCONTROLLED MUSCLE MOVEMENTS (facial tics).

All of these issues he has been dealing with, we assumed were "just Declan" but they are side effects from the Singulair!  We were equal parts shocked, mad, and relieved to have figured it out.  The poor kid!  I never in a million years would have thought his behaviors were side effects from a supposedly safe drug.  I think it would have been more obvious if he had been older when he started taking Singulair because the change in behavior/personality would have been clear, but he was just a toddler when he started so we were still watching him grow into who he was.

So what now?  Well, he is done with Singulair and we are hoping he will not have too many asthmatic reactions but we have the inhalers just in case.  We are also reporting the side effects to his pediatrician, just to have them on record.  He has been off of Singulair for about two weeks now, and without knowing anything about these side effects, and without any prompting, he told me at dinner last night that he "doesn't feel like he has to move his face anymore".  Heartbreaking and wonderful.

We are wondering if this happening at the same time when a new vaccine for you-know-what has been released is a sign to really rethink about how we want to handle vaccinations.  When a drug like Singulair has been deemed safe, studied for years, and can still produce surprising adverse side effects... then how safe can a new vaccine be without any long-term studies?  We had already decided we wouldn't voluntarily get the vaccination, but what happens if it's mandated for school, work, or travel?  Why do we need to be vaccinated against something with a 99.9% survival rate anyway?   Lots to think about and I hope Declan's tale can be helpful to anyone who has not connected certain behaviors with medications.  Don't be afraid to ask questions and find answers, your health deserves it.