The End of Catholic School's Week and That's What He Said

Catholic Schools Week is over, but the kids got a non-uniform pass if they wore their uniforms to Mass last weekend, so you betcha that's what they did.  Non-uniform passes are the equivalent to crypto currency in the private school world.
This week included the 100th day of school, where kids had to dress like they are 100.  So we threw some baby powder on the boys' hair and some of my glasses on their faces and called them elderly.  Maggie put together an old lady outfit and then decided she needed a wig.
"Look old!"
Maggie is giving me serious French Stewart a la Third Rock vibes: Wow, I really miss that show.

On the 101st day of school, Brendan got to dress up as a Dalmatian and his class watched 101 Dalmatians and ate "dog food" made up of Scooby Doo cookies and cocoa puff cereal.  Can we all go back to Kindergarten?  Sounds fun! 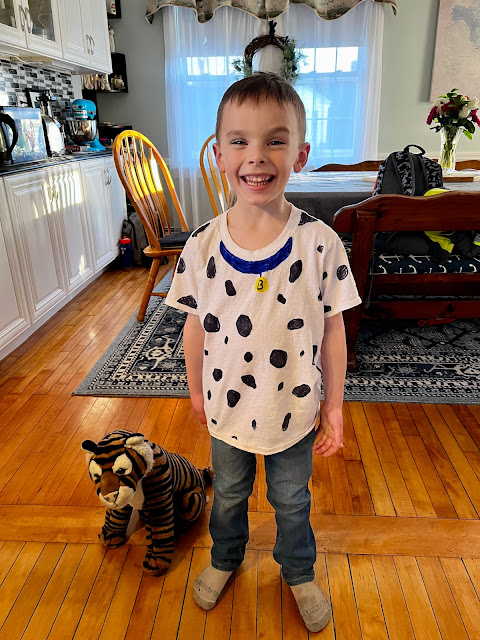 Maggie got into our Catholic high school!  Shocking, it was not, as that's where her Dad teaches and where I used to work and where her older brothers attend.  But what was shocking was how well she did on her placement exam.  Go girl!
Xander (age 10) has decided to learn another instrument.
Pray for us. 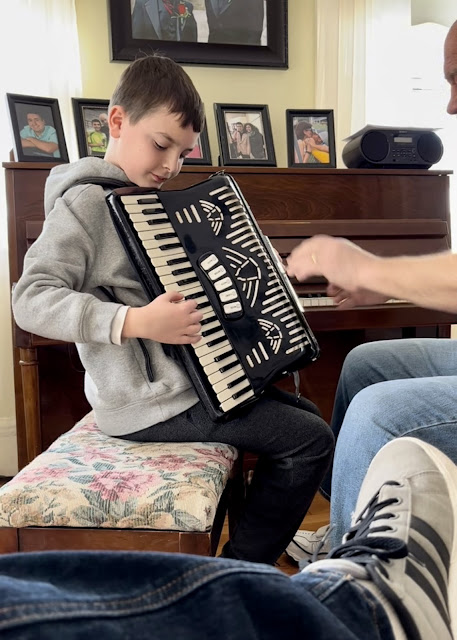 When your Kindergartner knows the trendy slang

Me: Brendan do you need to use the bathroom?

Me: Maybe you should just try before we leave.

Declan (age 7): Today we had to draw what we wanted to be when we grow up.

Me: What did you draw?

Declan: A Saint in Heaven.  But I didn't draw the golden gates because I didn't want people to think I was in prison!

They both have Disciples

Brendan: My teacher said her favorite number is 4 but that she might change it to 12.

Brendan: Well she let us guess why and I raised my hand and said, "Is it because of the 12 Apostles?"

She said "Good guess! But it's because Tom Brady just retired."