The big boys ran a 5k this weekend. 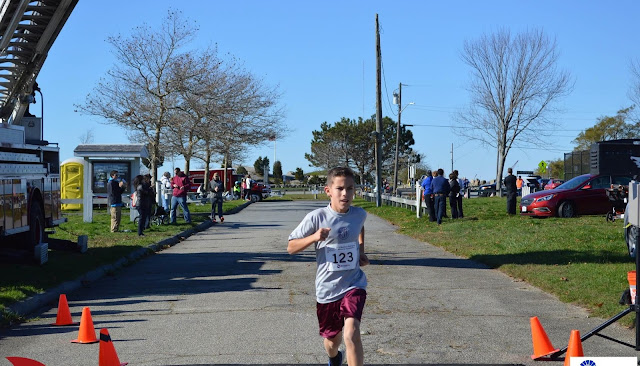 Andrew came in 7th overall with a time of 22:46.  He was close to his best 5k time, but was upset that he was in first place for the first two miles, but ran it a little too fast and then got passed by 6 people at the end. 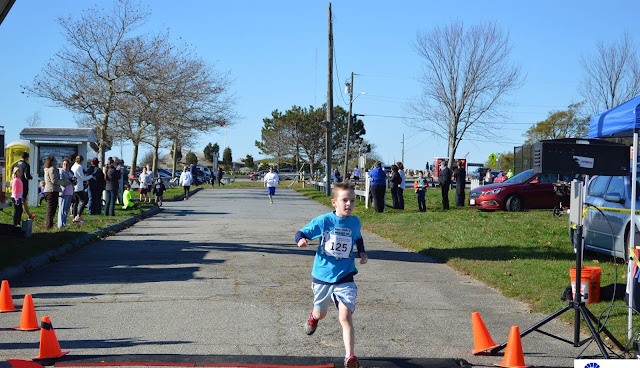 Eamon finished with a time of 28:29, he was disappointed in his pacing (he tends to sprint then wog on repeat) and wants to train with Phil to get a better pace. 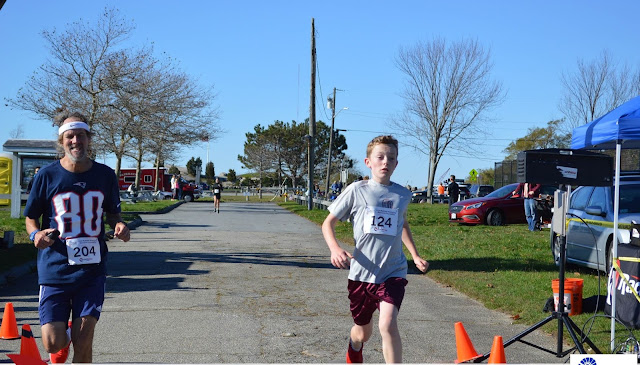 JP had a personal record of 23:36 (10th overall).  He said after that he could have kept on running and wants to try a 10K.  I am much impressed with the improvement he's made over the year!  He was happy to beat this guy at the very end too :)

They have another 5k coming up in 2 weeks, maybe we can squeeze in a few training runs with them before then.  Phil and I aren't running races, just because they cost $$ and the boys love doing them and we're a lot slower.  Thankfully, we have been able to run a lot this Fall with such gorgeous weather.  We haven't even missed the gym yet (we cancelled our memberships back in June) but I think we will join one again as soon as it's too cold/snowy to run outside.  We are hoping to run our 3rd Half Marathon in March, as long as Mother Nature allows for some gentle winter weather to train.

Maggie and Xander and Declan are just slackers when it comes to running ;)  Haha, Maggie looks at us like "Why would anyone want to do that?" so she sticks with Irish step dancing instead.  That is a tough workout!  They just jump for an hour straight!  Xander's thumb muscles get the biggest workout as he plays Wii and other video games like a champion gamer (but only on the weekends!) and Declan is the cutest baller in training with our indoor hoop.  He can't throw a ball without jumping, it's adorable.

I love being an active family, I couldn't imagine it any other way.  Maybe that's because we have so many boys, and boys are like puppies and need to be ran around :)  Our pastor has been giving a lot of homilies lately about the importance of putting Mass and church events before sports and work events.  I always flinch a little when I hear these homilies because while I know we would never miss Mass for a sports practice, we do put a big emphasis on sports and health and fitness in our house.  I need to make sure I'm putting more emphasis on the soul workouts as well.  I'm thinking of getting one of these for the house, maybe they can pray Hail Mary's while they use it ;)