It's Friday!  It's Friday! You can't have meat but you can have all the 7QT you want over at Kelly's!

Me and Lent have had a rocky relationship this year. We started out like newlyweds on a honeymoon, every day was so easy and rewarding and I felt great about life.  I was using my prayer journal and reading Scripture each evening, praying the rosary daily, and refraining from sweets and Instagram like a boss.  Then we went through a trial separation.  The prayer time wasn't so easy to find nor looking as attractive as it had in the past.  It felt like a lot of effort on my part.

But, I think we are now back on track.  I am doing really well with my no-social-media fast (meaning I haven't cheated, not that it's easy!) and only ate ice cream one night and some chocolate another night because I forgot!  It's always the added prayer time that gives me the most grief, and we all know that comes from down under (and I don't mean Australia, mates!)

As Declan would say, Seweeously??

This is me trying to lose those three pounds:

And Phil, losing double the weight:

But really, much like the beginning of Lent, it's been a pretty easy start and we feel really great.

Some of my favorite meals this week have been:

The middle kids have started playoff basketball games this week.  Andrew had his first on Thursday night (they had an easy victory!) and Maggie has her first tomorrow morning.  She is really nervous because in her mind "all of the plays depend on her".  I'm sure that's not true, but I do love watching her hustle on the court!  Eamon plays next week and then poof! basketball season will be over in a couple weeks!  We've been at it since October, so it's a long season for sure.  Oh, and don't forget to fill out your March Madness brackets this weekend...we are each putting in $5 and the winner will walk away with $30.  The funny thing is that I usually win and when I fill out my bracket, I have no idea about any team, it's pure luck.

Track starts up this month right as basketball ends.  Jp will run Spring track in high school and is going to try throwing events!  I was threw shotput in high school, so I'm excited.

The elementary kids will be coached by the fabulous Mr. Martin once again, and we will do a few 5ks once everyone is in running shape.  Phil and I have been completing our 2018 goal of running a marathon ('s worth of miles) every week except for the one week we were short 4.5 miles, which is a bummer but we had a pretty bad Nor'easter and couldn't get out.  But I am *trying* to be okay with the fact that life will get in the way of my best laid plans and just roll with it.  *trying*

I want to remember how much Brendan is communicating with us at 18 months.  He doesn't have tons of words yet, but we all know what he wants!  He does a little shoulder shrug with one hand up when he wants to know where something is.  He loves to wear hats and will tap his head and say "At" until we give him one.  He grabs his high chair tray and says "Ot" to get out.  He calls his pacifier "bee".  He loooooves Mickey Mouse more than any of our other kids, and asks us for "Minnie Mow" all day long, especially if he sees the ipad.  He copies Declan like a shadow:

He yells at Alexa but calls her "ALAYLA!"  He says "Cookie" for most snacks in a really cute voice.  He still says "no" to any question you ask him, which the kids use to their advantage..."Does Maggie need to eat her veggies?" no! "Did Alexander break the pump?" (he did) no! etc. etc.

When we pick him up from the babysitter he is so excited to see us and then promptly runs away so we can't take him home.  Once we finally wrangle him, he HAS to carry his lunch box, but instead of grabbing the handle like a normal person, he always slides his arm under the handle and carries it a la Taylor Swift: 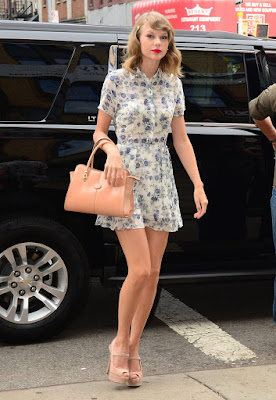 He climbs up on everything to give us heart attacks daily.  The babysitter said he pulled the play kitchen over to the pack n play and used it to escape.  He came walking out of the bedroom and the babysitter and her husband looked at each other like "Did you let him out?" then they put him back in and peeked through the crack in the door to watch him do it again.  Little monkey!  By 6:30 we are usually thoroughly exhausted by his physicality and we put him to bed, where he happily goes until his 5:30 am wake up.

Declan turns four (Squee!  My favorite age!) the day after Easter, and we are wracking our brains to think of gifts for him.
I already got him some pajamas and a new swimsuit and rashguard for camp this year (they wear swimsuits everyday).  He loves to play outside, so we were thinking of this.  Or maybe this or these (but so many pieces!) for indoor play?  Do you have any good ideas?  I feel like we should be experts by now, but we're struggling with finding the perfect present for the sweetest boy who will be happy with anything!

We are LOSING an hour of sleep this week!!  Argh!!

Also my most recent pet peeve is that I keep seeing people spell losing "loosing"...it's driving me crazy!  Ok, Colleen, be calm, be humble, you make a million spelling errors every time you write a post.  Alright!  Geesh!  I guess I won't loose my peace over this.  Wink.

Have a wonderful Lenten Time Saving Weekend Everybody!
"Thunk" by Colleen