John-Paul got Confirmed on Wednesday evening!  He is now John-Paul Michael Martin.


When JP was young, he asked why he didn't have a middle name, and I told him it was because he had two names for his first name but that one day he would be able to choose his confirmation name to put in the middle.  He knew from a very young age that he wanted to choose St. Michael the Arch Angel as his namesake, and dressed as him for All Saints Day for as long as the robe would fit! 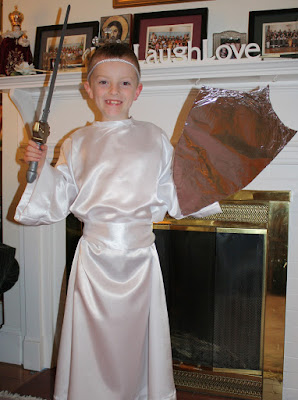 May the strength of St. Michael keep away all evil from my first born son.

Thursday was Phil's feast day.  We always remark how all of the stupic tv characters are named Phil...and I just figured out why.  Even St. Philip the Apostle was kinda dumb.  Go ahead, read about him.

Because the Confirmation was so late on a weeknight, we didn't celebrate until the next day, when we took JP and his sponsor, Haley out to dinner at one of our favorite restaurants.  We told them to order whatever they wanted and JP went to town!  I'm not sure if you guys know this, but teenage boys can eat ;)  He ate the bread and oil, a sausage/potato soup, fettuccine alfredo with chicken, and the flourless chocolate cake with espresso gelato.  He was finally stuffed at the end!

Weekend plans - Tonight we are going to a fundraiser for our school's mission trip to Tennessee.  It's an appetizer contest where we sample and judge the best chef's creation.  I'm excited to see which of my coworkers are good/horrible cooks!  Saturday is Cinco de Mayo!  Get your salsa ready!  Sunday is a family 5k race to rise funds for families going through cancer, put on by my doctor, whose wife died of breast cancer last year.  I will be running for prostate cancer, in honor of my dad who beat the heck out of that disease and praying for Sarah's battle with breast cancer along the way.  Then my nephew is receiving First Communion and we will have a party after - a full but fun weekend ahead! 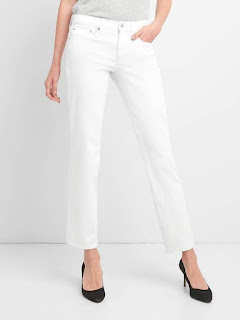 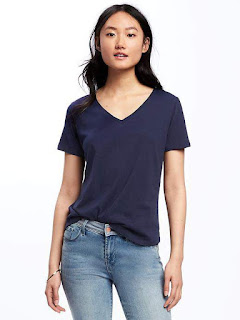 because the weather is beautiful and white jean season is fleeting!  Plus we all need a new white tshirt every year!

I went to the chiropractor this week for a tuneup after three years of not visiting.  He made me feel much better with the massage, stretches and adjustment, but also told me to stop running so much.  I told him I couldn't stop because I made a 2018 Resolution to run 26.2 miles a week.  He said "there's no need to put the same continuous stress on your body unless you're training for a marathon or ultramarathon".  He's an athlete himself, running a half-marathon each year.  He suggested I run three times a week and cross train the other days, with lots of stretching and foam rolling in between.  He said it's runners that keep him in business. 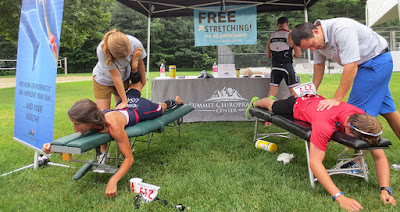 I'm feeling sad about breaking my resolution but I've also been having a nagging feeling that I should be mixing up my routines more.  When I was in my best shape, I was doing a kickboxing class one day, running a couple days a week, strength training on another day, taking a spinning class, and doing a cross fit workout.  I need to do more of that diversity, but running is just so easy and flexible and available, ya know?

Has anyone gone to Jen Fulwiler's new book tour?  She's coming to Boston on May 18 and I am debating making the drive up there.  Will YOU be there?