I know I'm not alone when my mind starts to wander during my Holy Hour in Adoration, I always try to rein it back in and focus, but a lot of times I think these wanderings are God-prompts for some time to ponder life, such as... 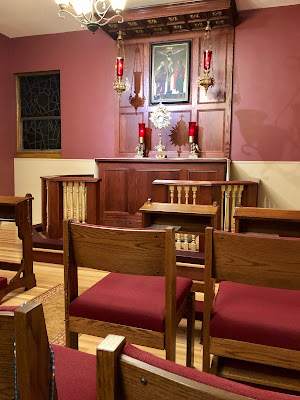 Parenting is hard.  While it's less physically demanding having older kids, they are emotionally exhausting if you're doing it right ;)  I am always worried about who they're hanging out with, what they're doing, how they are feeling, what issues they are struggling with, and how they are coping.  Some of my kids open up easier than others, and those quiet ones worry me.

Technology is a big part of why parenting older kids is hard.  While I firmly believe in allowing them to grow up and explore the world, it's a different world than what I had at my disposal at their age.  I'm trying to raise them right and warn them about the dangers of things I never had to deal with at their age, so I don't really know what I'm talking about.  Like, I don't know what kind of adult they will become after having been a teen on social media.  I don't know how having the internet at their fingertips will change the way they see the world.  I don't know how, through their phones and games, they will turn out having rarely been bored or still.  I remember what it is like to be a teenager in the 1900s (ok, it was the 1990s but either way it sounds ancient!)

This isn't just my generation's problem as a parent...every generation has to guide and protect their offspring from things they never had to deal with.  Think about how parents felt when tv's started coming into the house, when cars were first made, when a draft for the war started as their kids turned of age.  You wouldn't ask for a tour guide to lead you through the jungle if he has never been to the jungle before!  Yet that's what parenting is!  We're the ill-equipped tour guide trying to keep the world from eating up our children.

It would be hard enough to raise kids in exactly the same environment we had growing up, but that environment is always changing and change can be scary.  Change can also be good.  I have to remember that!  If my father hadn't left his native country at a young age, I wouldn't be here.  If I hadn't gone to a college far away from home, I wouldn't have met my husband.  If Phil and I hadn't gotten married young, we wouldn't have the same kids we have now.  You can be scared but also have the faith that God will work good out of any situation.  Change is exciting, it's life-giving, and it can be totally positive.

I love my kids sooooo sooooo much and God placed me here to be their mother and raise them to the best of my ability, but I'm not God.  And as much as I love and want to protect these babies, He loves them even more!  That gives me peace.  It's not all on me, you know?  So I pray, and I hope, and I steer them through life for as long as I can, and then I trust that I have done enough.  God's got this.
"Thunk" by Colleen