State of the Martin(s) Address

How about some life updates on my seven wonders?  Yes?  Ok!
John-Paul (age 17 for 2 more weeks) 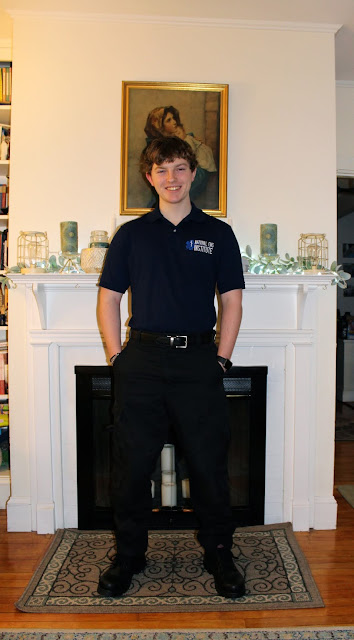 JP is finishing up his senior year in high school, keeping up his 4.0 GPA with a hard load of AP classes.  He has heard back from 9 out of the 10 colleges he's applied to and has gotten great scholarships to all of them.  He earned $39,000 off tuition at one school (woah!), but the tuition is $72,000 (woah!) sooooooo big scholarships don't necessarily translate to being able to afford the school.  His top choice is still Franciscan where we think he can graduate in three years because of his AP credits.  He definitely wants to pursue a career in medicine, most likely Physician's Assistant, so he has grad school or med school ahead of him and that will be the expensive part.  He continues to work at the grocery store (and the ice cream store when it opens this Spring) though he took a two-month hiatus from working so that he could attend EMT classes, which is why he's dressed like that in the photo.  His normal attire is sweatpants and a hoodie.  His EMT classes end next week and then he will take the exams right after he turns 18.  He's hoping to rack up a lot of patient care hours through a future EMT job because that's what he'll need to get into a PA program.  Oh!  And he's dating a beautiful girl from Texas, but I won't mention her name here so as not to embarrass her.  They are so sweet together, and we know and love her family.  Every teenage parent's dream is for their child to date someone far far away, amiright?
Andrew (age 16) 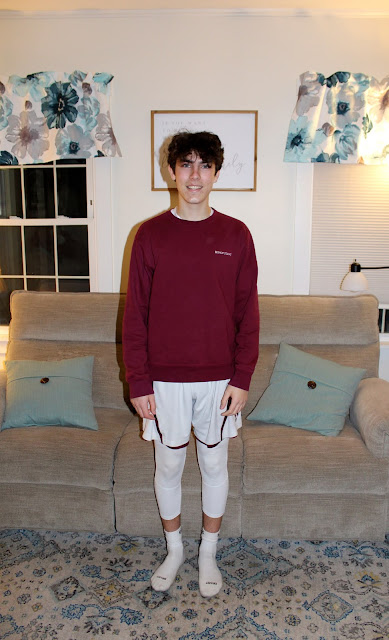 Andrew, my high school sophomore who needs a haircut, did not want to pose for this photo, which I get, but I have no pictures of him playing sports this year because of all the spectator rules from Covid.  So here he is on the night of his last JV basketball game of the season.  Andrew played Varsity soccer in the fall, and our league is having a weird "Fall Two" season in February and March so Andrew will also be trying out for football for the first time ever.  Phil and I have always said no to football and hockey, but never say never because sometimes these kids have a passion and wear you down!  In the Spring, he will run track which will make him a four-season athlete this year, which is unheard of!  He is keeping up his grades very well in his honors classes, though he definitely has to try hard to get As.  But I think being a hard worker is better than being naturally brilliant and never learning to work hard.  Andrew would love to be dating a girl, but Covid has taken away all social events and makes dating much more difficult (not that I mind!)  He has his driving permit and is completing his driving lessons slowly but surely.  His mom thinks he has a lead foot.
Eamon (age 14) There's Eamon in his natural habitat.  This kid is always eating and hoping it means he's about to have a major growth spurt!  Eamon is a kid that thrives on sports teams, and so the cancellation of his regular soccer league (he participated in soccer clinics with another league) and no CYO basketball has been a hard pill to swallow.  He ran for 8th grade Class President...and lost :(  But then he was named National Junior Honor Society Treasurer and life was better.  He somehow managed to get strep throat in the middle of a pandemic while wearing a mask in school and everywhere else he went.  Germs are fun!  Eamon is just an easy kid that we don't have to worry about.  He gets great grades, is organized, and gets along with everyone.  Yesterday he interviewed everyone in our family to figure out genetic traits and we discovered that he is the only one with a "butt chin like Tom Brady" so it's a good thing he looks just like me or we wouldn't be sure he's ours.
Maggie (age 13) 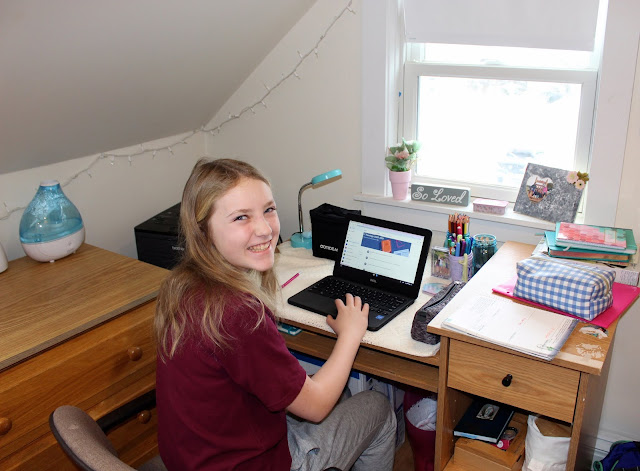 Maggie saw this picture and said "Ugh I don't look good and my room is a mess, but you can use it if you want."  That's exactly her personality!  She's always stressed out about a mess or schoolwork, and after losing her mind for awhile, she calms down and is by far our most helpful child.  To you moms who have a couple of tweenage daughters - lucky you!  Maggie is playing volleyball this winter, and loving it.  She's already 5'6" so her height is an asset in volleyball and basketball (though CYO was canceled this year).  She is my workout buddy and we take classes at the YMCA and at home together.  She is also my eating buddy and we love the excuse of an extra snack because "we're about to workout" or "we just worked out".  Balance baby!  Maggie became the Vice President of the National Junior Honor Society this year and takes that role seriously, as no other 7th graders were chosen.  She puts the little boys to bed almost every night and reads them a saint story and says prayers with them, and is often found talking about becoming a saint or what qualifies a person to get into heaven.  She desperately wants me to have another baby or to grow up fast enough to start having her own babies, and as a former baby-crazed girl, I can relate.
Alexander (age 9) 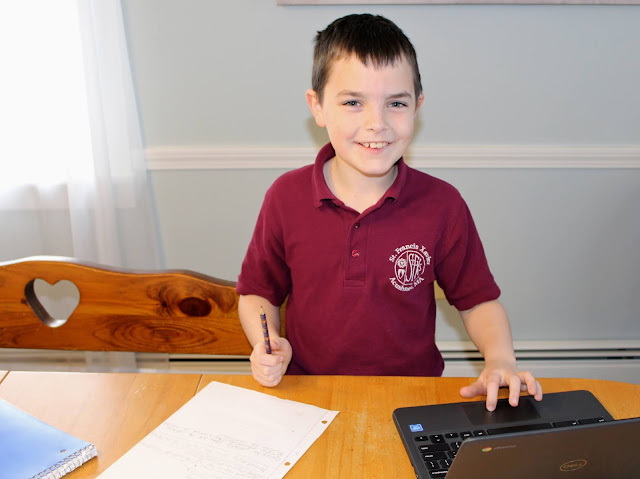 Xander Xander Xander.  What will become of this boy?  Most people that aren't his parents or teachers find him hysterical.  He told me today that he's decided he won't become an astronomer, because being a famous pianist will make more money.  He is pretty good on the piano, but he memorizes all of his songs and doesn't truly read music yet.  Is that common?  Alexander can most likely be found with his nose in a Calvin and Hobbes book or listening to a book on Audible (good deal going on now!)  He is an indoor cat and loves his screen time.  The sentences he writes for school are so creative and detailed, that I think writing will be in his future.  Maybe he'll carry on the family blog one day ;)
Declan (age 6 and a half, of course) 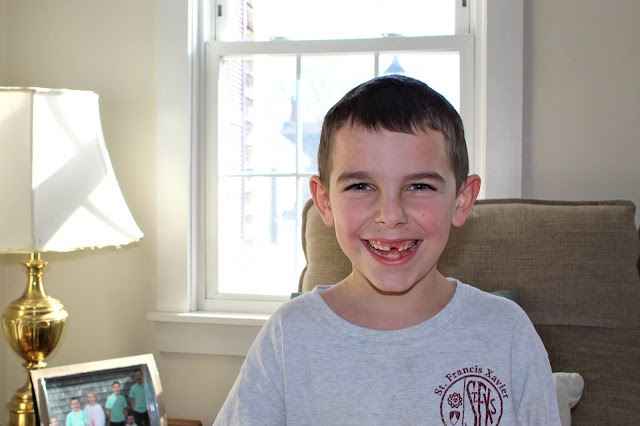 Declan lost his fifth tooth but first upper tooth, and looks like an official first grader now.  We were so thankful to take him off of Singulair and have all of the side effects disappear.  We have had to use his inhaler once when he told us he couldn't breathe well, and I saw him struggling.  The inhaler worked, and that will just be our go-to now as issues arise.  He still has misophonia and gets crazy upset when anyone sniffs around him, but the doctor is giving us little tips to try and help him through it.  Unfortunately, having misophonia is associated with having anxiety and I've always felt that Declan suffers from that in terms of social anxiety.  At home, he is a happy boy who loves to play and EAT like a teenager.  Maybe he'll gain weight one day ;)
Brendan (age 4 and a half, of course) 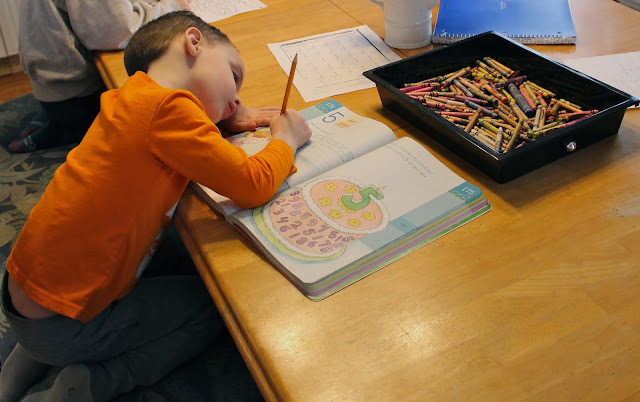 That drawer full of crayons is one of ten drawers in our Art Cart which may have been my best purchase of 2020.  Crayons in one drawer, markers in one, whiteboards in another, pencils and pens in another, paper in one, you get it!  Easy to pull out and use and slide back in.
But this isn't about art carts!  This is about Brendan, my preschooler that I wish I could freeze in time.  Brendan is Declan's mini-me and makes me so happy that we were surprised by number seven because I can't imagine life without him.  He constantly comes up to me with a hug and whispers in my ear "I like Dad but I like you a little better!" much to Phil's dismay.  We all want Brendan's undying love and affection!!  When his siblings are doing school remotely, he pulls out his "journal" and works quietly alongside them at the table.  He still wears a pullup to sleep and even though he has a sticker chart with the promise of a trip to the Dollar Store...he wakes up each morning, throws his wet pull-up in the trash, and says "Maybe tomorrow!" without a care in the world.  This boy is as happy go lucky as a kid can get.  He wants to be a saint and a priest when he grows up, and I can totally see both!
And that is the state of the Martins.
Have a nice weekend everybody!  Celebrate the ones you love this Valentine's Day! Go visit Kelly for more :)
"Thunk" by Colleen