Spring Break Part Three: From Virginia to Maryland to Massachusetts

On Thursday morning we woke up and had a relaxed start to the day, as the plan was Busch Gardens and it didn't open until 11 am.  Phil cooked us a big breakfast of eggs and bacon and biscuits, then we left the condo at 10 am and swung by Duck Donuts to pick up our designer donuts we had ordered the night before.  They were warm and gooey and delicious and my waist is glad we don't have a location near us!! 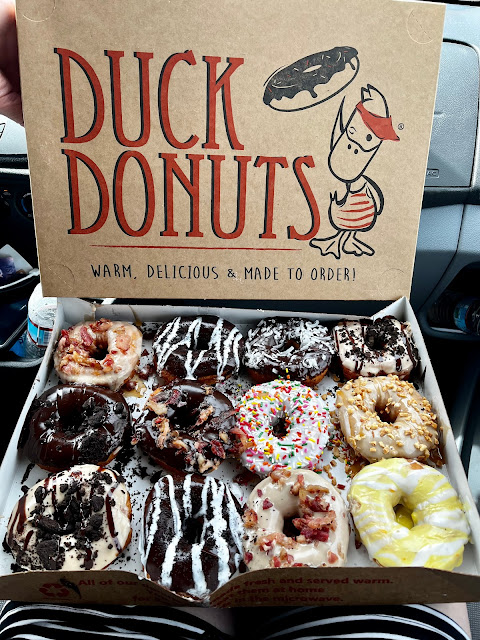 My youngest sister and her family were vacationing in the Outer Banks for the week, so they drove to Williamsburg for the day to hang with us at Busch Gardens, which was so fun! 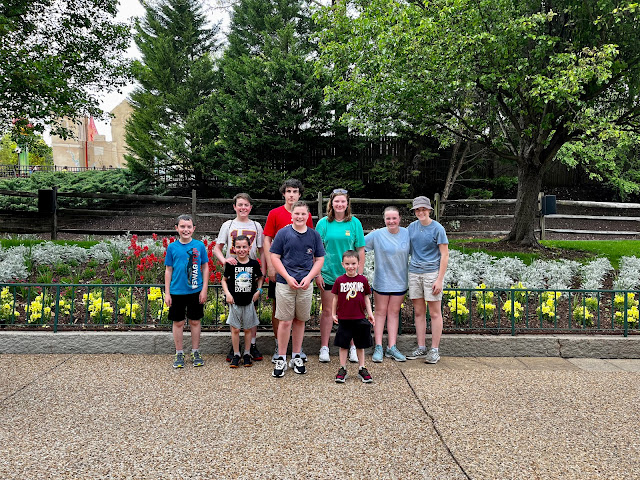 I will once again let the photos do the talking, with some notes to remember at the end... 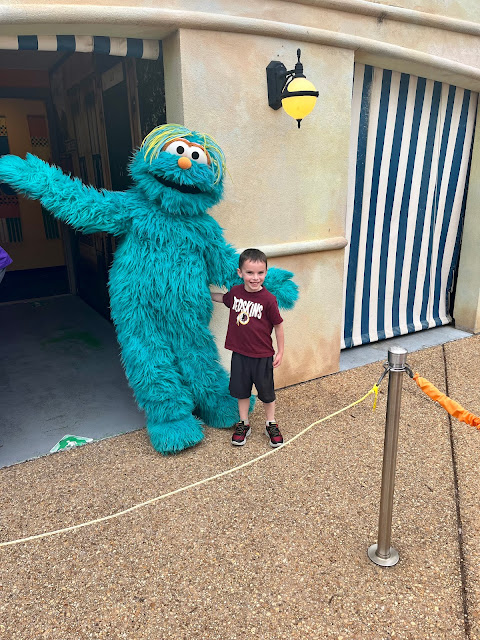 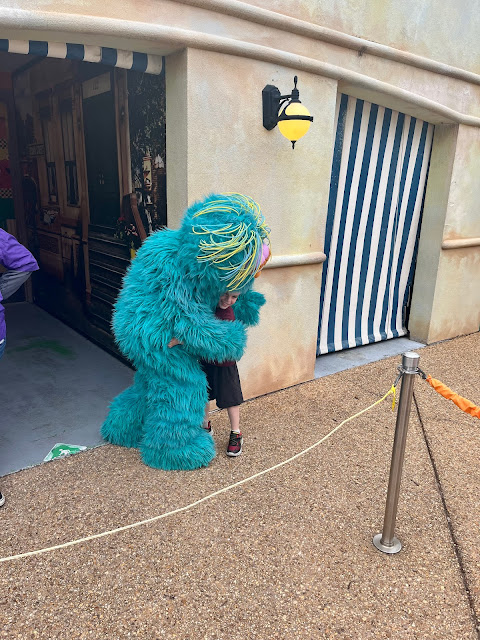 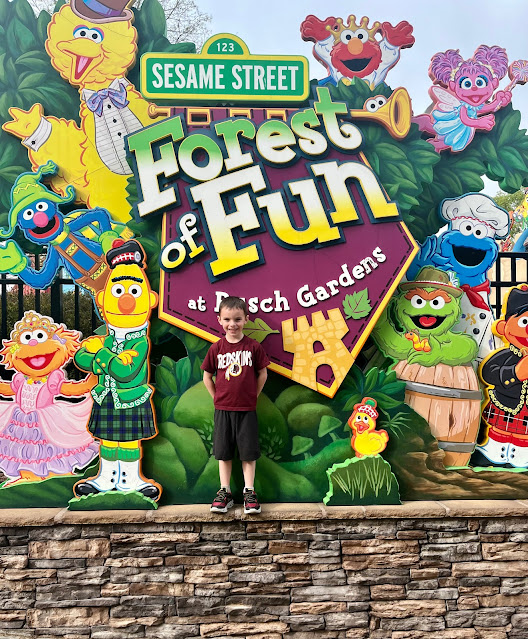 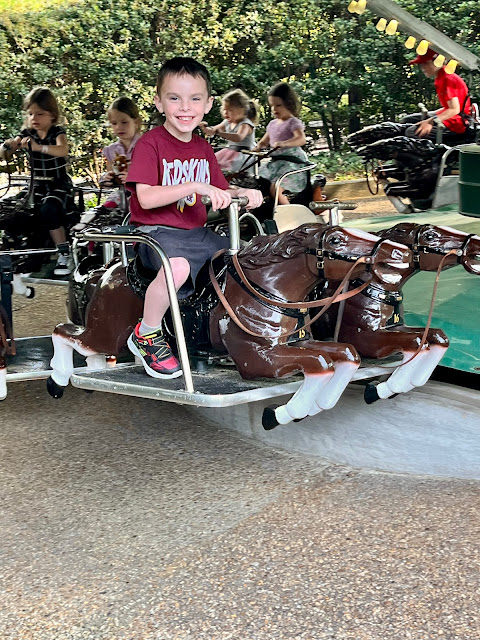 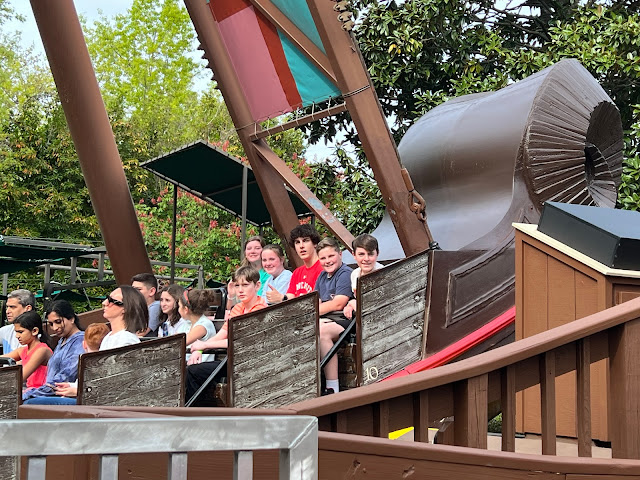 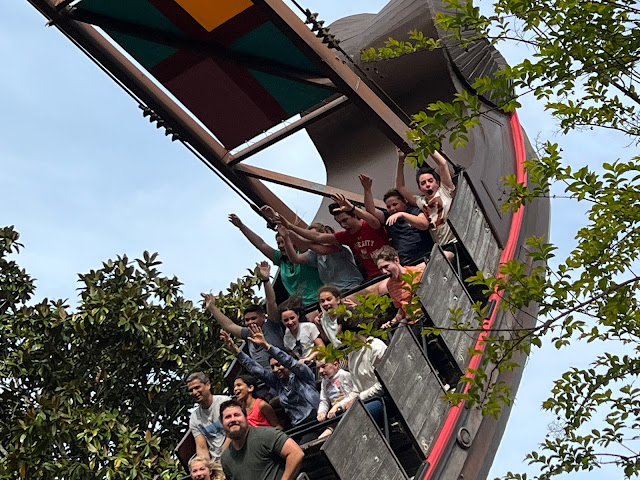 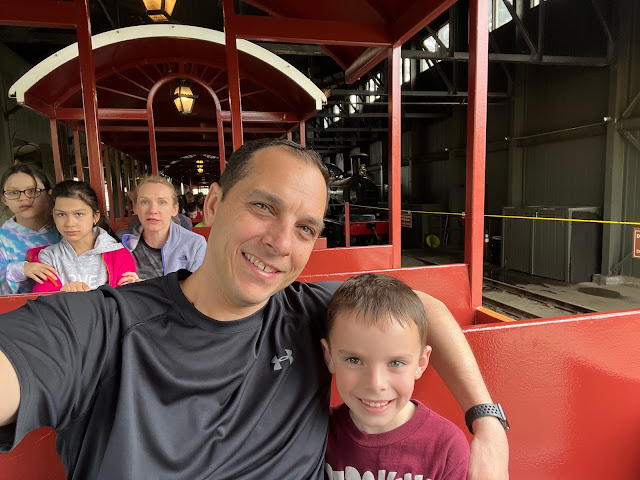 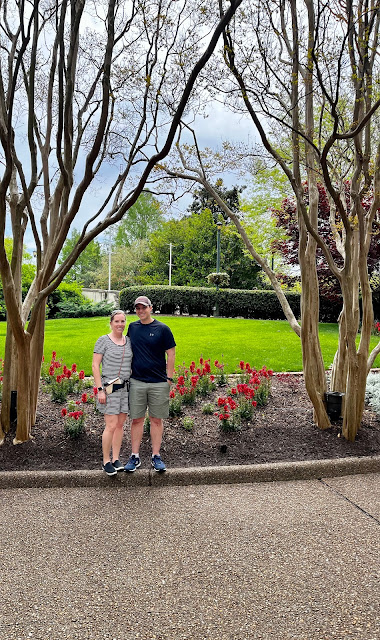 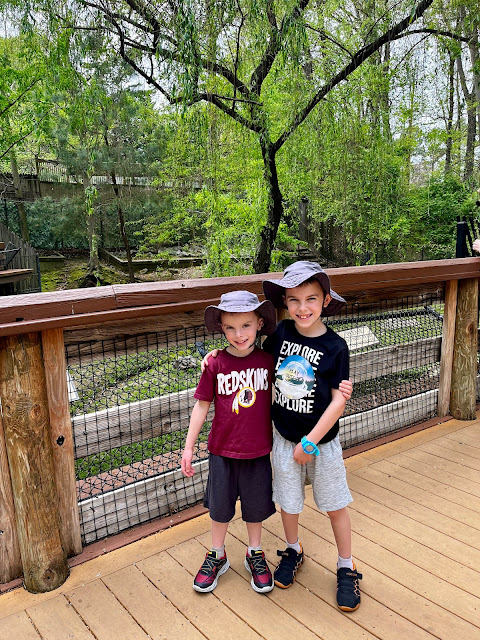 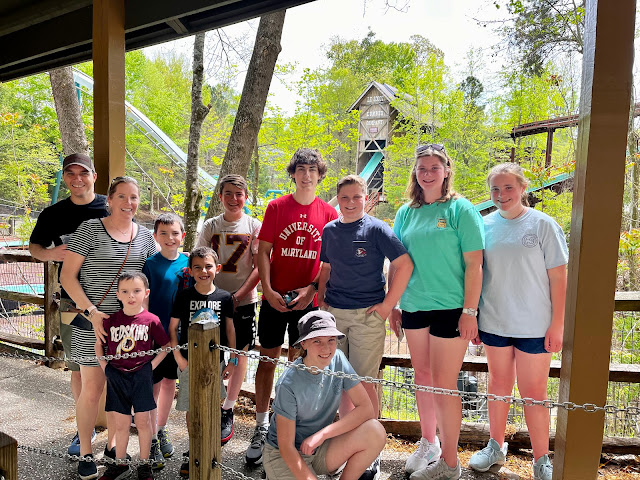 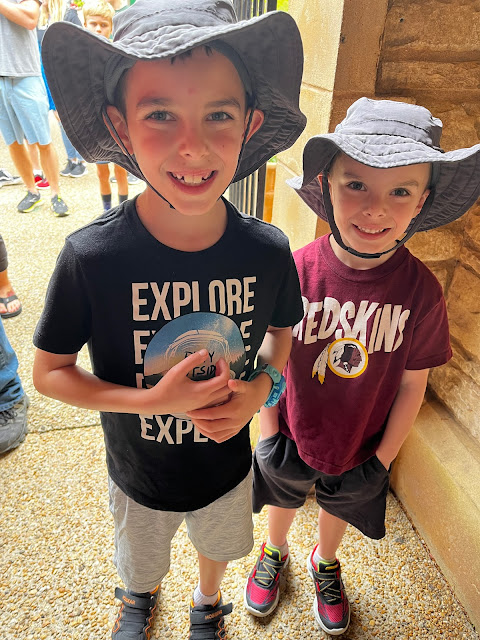 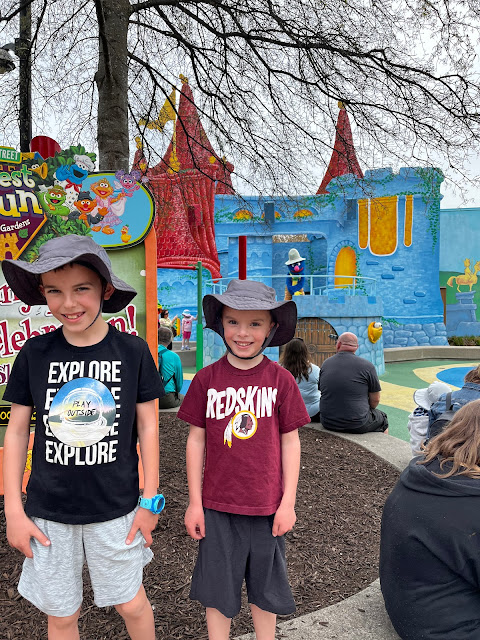 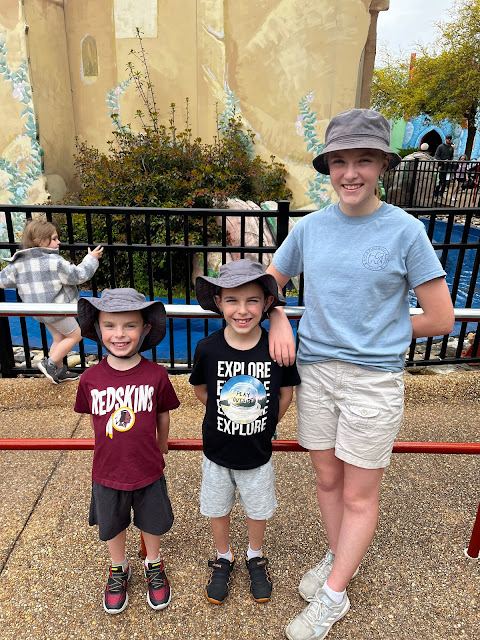 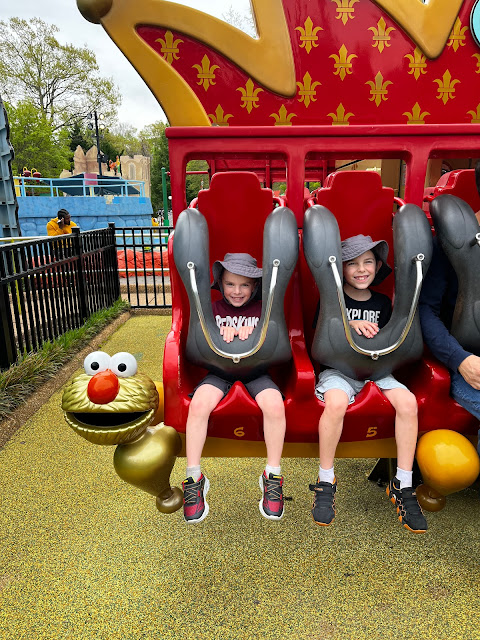 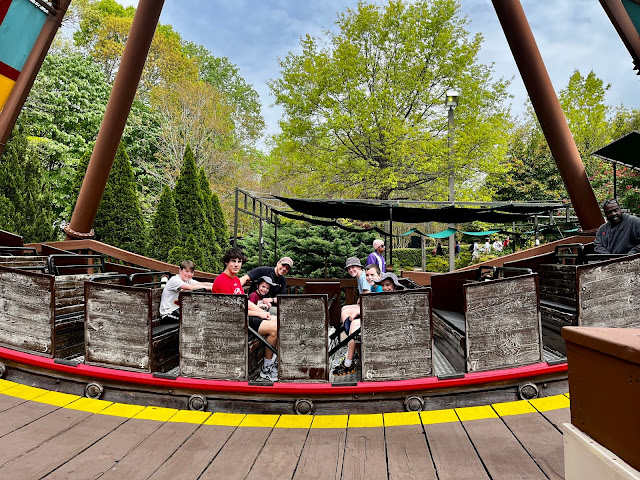 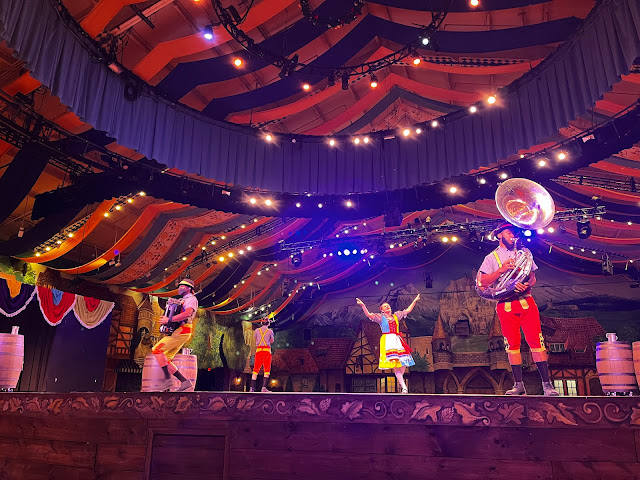 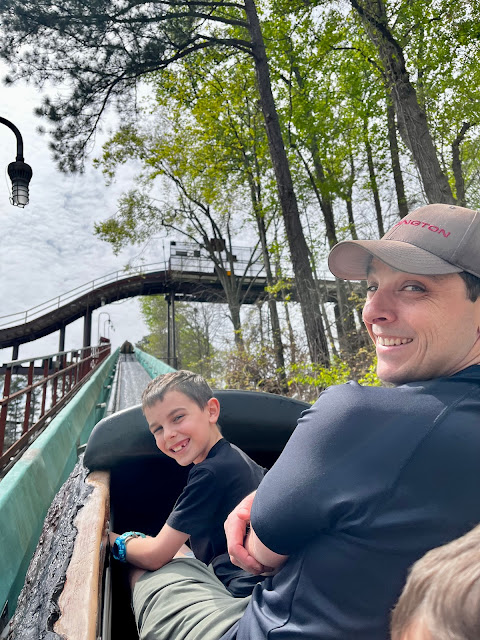 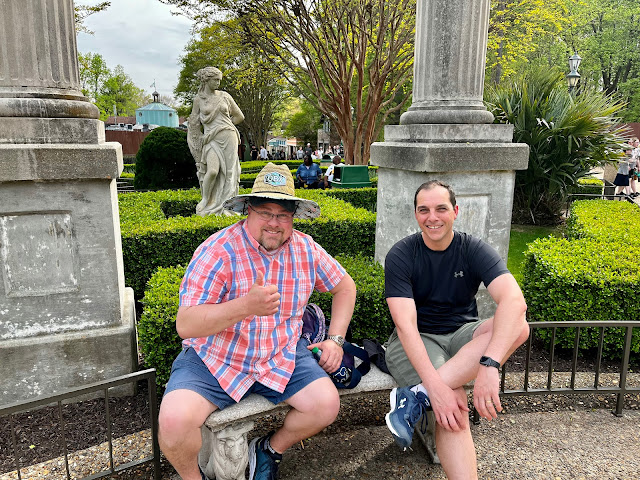 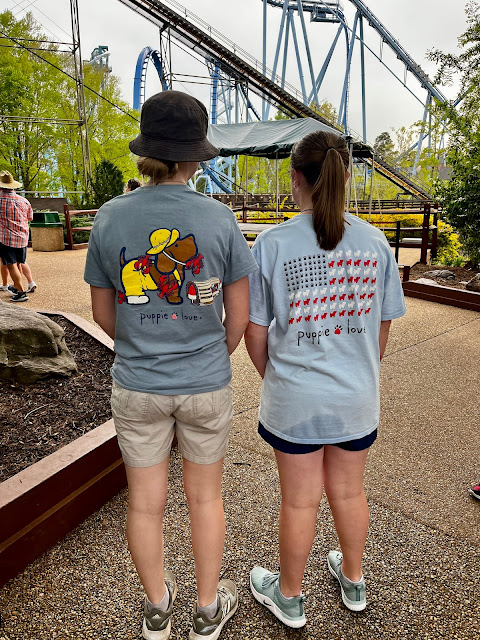 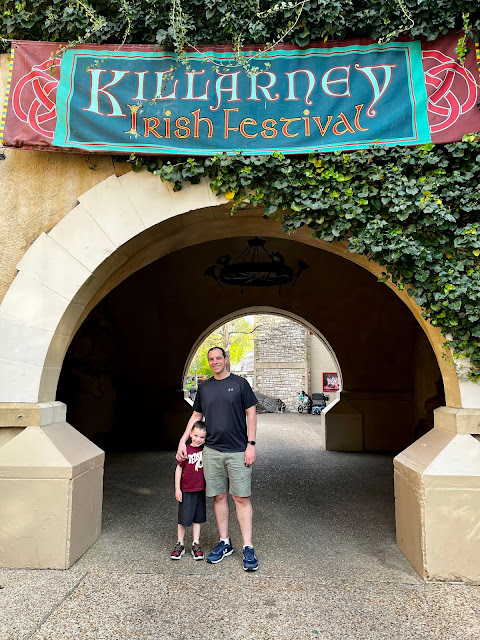 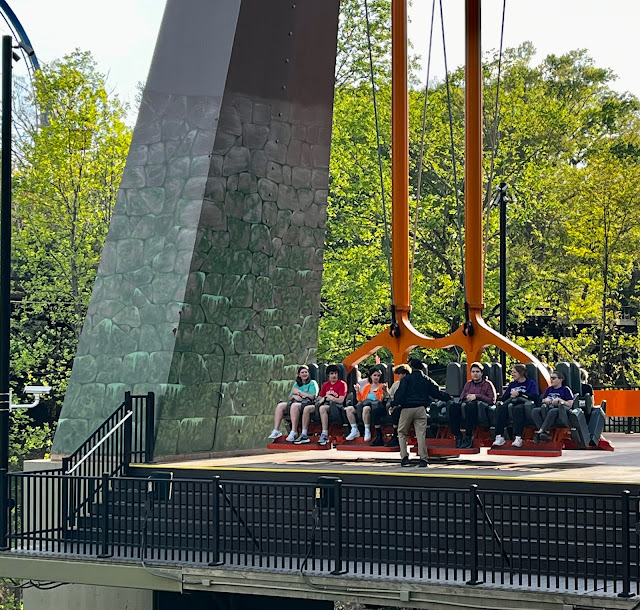 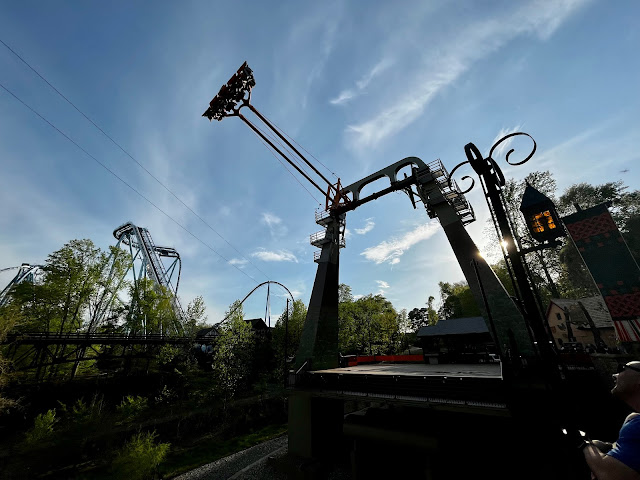 Notes for the books:
1) I need to get into more photos.  I never want to in the moment, but I always regret it after the fact.
2) Declan (our new 8 year old) is an adrenaline junkie.  For my boy that tends to be nervous in social situations, he has No Fear when it comes to thrilling rides.  He went on every ride that he could, including upside down roller coasters and the highest drops and the darkest scariest rides.  He loved them all!
3) Brendan (5) who is more confident in life tended to be more wary on the scarier rides.  After going through the Pompeii ride that has fire and a big statue that seems like it is about to fall on you, he declared he was never doing that ride again.  For the rest of the day he kept asking us how the statue looked like it was going to fall on us but didn't.  He couldn't wrap his little mind around all of the cinematics of the rides.
4) The Irish show was awesome!  Full of step dancers and good old Irish tunes to sing along to.  I tried to record it but a worker strongly tapped me on the shoulder and told me to stop.  Boo.
5) The German show was a lot of fun too, especially the chicken dance.  We felt so bad though because we went to the first show at noon, and there were only about 20 people in the audience, including us!  The entertainers are on a big stage in the middle, surrounded by tables where the guests sit.  Not one guest was on the opposite side of the stage from us, but the entertainers had to go through their whole routine and keep turning their backs to us to perform to the completely empty other side.  I felt bad for them.
6) On the flume ride in France, just before the big drop, the announcer's voice says "Hold onto your hats!" and we dropped and Phil's hat flew off his head.  Turns out the same thing happened to my dad years earlier.  Ha!
7) On the way out, Maggie (14) was tossing her hat in the air, and it got stuck on a beam running across the entranceway.  Really?!?  I took a water bottle out of my bag and Maggie and Andrew (17) stood on either side of the beam, throwing it back and forth, attempting to knock the hat off the beam.  Of course, the water bottle landed up their with the hat too.  I grabbed another water bottle, and they recreated the attempt and also stuck the landing of the second water bottle.  Really?!?  Finally, Phil put Andrew on his shoulders and he was able to reach the hat.  At least one hat saved!
We let the kids swim back at the condo while we heated up food and all went to bed exhausted from the fun.  The next morning, we went for a run and the kids swam again before we packed up and headed back to Phil's parent's house in Maryland.  The 3 hour trip turned into a 5 hour trip due to traffic which was frustrating to waste a beautiful afternoon sitting in the van.  We had one last meal with Phil's parents and left the next morning at 4 am.  We arrived home after a smooth trip at 11 am.  The kids were SUCH troopers about all the driving...32 hours total.  We listened to Charlie and the Chocolate Factory and James and the Giant Peach and they slept and played on devices/phones.  NOBODY threw up for once!  The dramamine helped, I'm sure.  It was such a wonderful family trip and I'm so glad we did it for all the memories.  These sweet kids grow up so so fast and they won't always be able to vacation with us, and I am so grateful for it while it lasts.
"Thunk" by Colleen