One morning in August, Maggie started complaining about her "ear hole" which is the auricular pit she's had since birth.  Apparently it's just a part of the ear that never finished closing up during the sixth week of pregnancy when the ear is developing.  It's not super uncommon and it tends to run in families, Brendan has it too.  When a baby is born with one (or two) the doctors test their kidney function as it can be associated with some other abnormalities, but in Maggie's case, it was just a little "ear hole" and they told us not to worry about it unless it became infected.

We took her to the doctor after trying warm compresses and draining at home to no avail.  She was immediately placed on antibiotics because an infection that close to the brain is no bueno and two weeks later, we were sent to the ENT from Boston Children's Hospital.  The doctor there explained that once it becomes infected, they like to remove it/close it up, as frequent infections are most likely in her future and that leads to scarring which leads to a tougher surgery.  Upon going through her medical history and discovering how many times Maggie has had strep throat (so many times!) she suggested we have her tonsils removed during the same surgery so as not to make the poor girl have two different surgeries in a couple years.  She said she would look at her adenoids while she was in there to see if they needed to be removed as well.  The surgery was scheduled very quickly for September 20.

On September 19, we took Maggie for her "last meal with tonsils", suggested she order something crunchy, but she got the cheeseburger and ice cream.  Oh well, whatever makes her happy!  Then we went for a long walk while Eamon had soccer practice and we were ready to take on the next day! 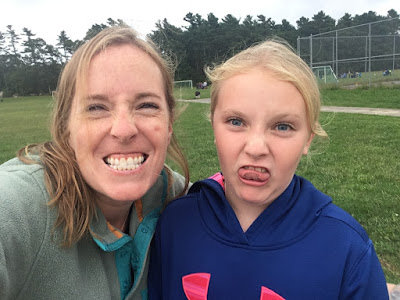 The surgery was scheduled for 8:45 am, with a 7:15 check in time at a hospital about an hour away.  My parents warned us to leave early due to the traffic heading into the city, and I'm glad we listened because there was soooooo much traffic.  We left at 5:30 and got there at 7:10.  Maggie rested a bit in the car while we listened to The Greatest Soundtrack music. 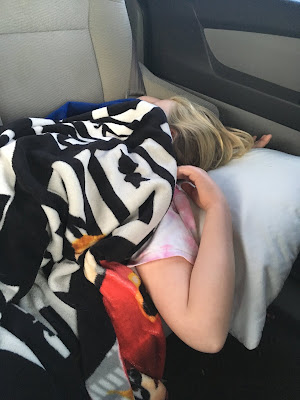 She got prepped for surgery, and everyone was so great there.  Somebody brought her model magic to play with and we passed the time just fine.  One of her nurses was named Colleen and one of the doctors had a grandma who lived in the same town where Maggie goes to school - so we kept counting up all the "good signs". 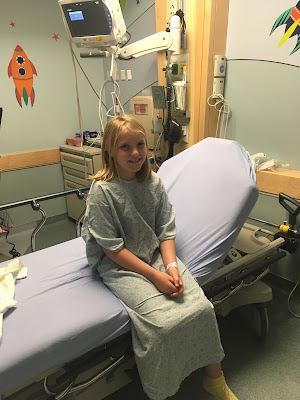 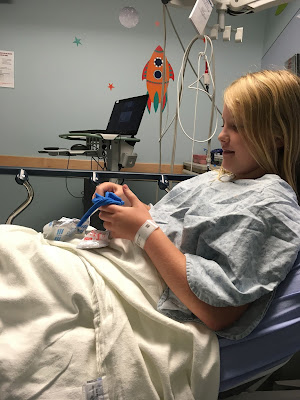 Maggie was very shaky at the beginning of the whole prep process (the nurse was checking her breathing and said all she could hear was her little heart pounding!) but she asked a lot of questions, got great answers, and really was able to calm down.  When the anesthesiologists came in, Doctor A checked her all out, and then asked if she had any lose teeth.  Maggie showed her the two loose teeth she had, and Doc A went out to get Doc B to check them.  Doc B said she would really like to see one of the loose teeth removed before the surgery, and told Maggie to wiggle it a lot and loosen it up.  Maggie went to work, and I offered to pull the tooth out (I LOVE PULLING TEETH!!) if they could get me some dental floss so I could use my signature move.  They gave me gloves and went on the hunt for the floss.  Meanwhile Doc A pulled Doc B aside and told her she was a meanie for making us remove the tooth, saying they could just do it while Maggie was asleep.  But Doc B was pretty determined we could get it out before the tooth ended up in Maggie's lung during surgery.

I handed Maggie a tissue and told her to try and twist it, and my girl went to work.  She twisted and wiggled, and out the tooth popped!  Maggie handed the tooth to me and I wrapped it up in my gloves and tossed it in the trash.  We called the docs and nurses back in, told them she yanked out her own tooth and everybody was like "YEAH, SHE'S SO TOUGH AND BRAVE!!"  One of the nurses offered to get me a little tooth container to bring home the tooth and I told her I threw it away and everybody was like "WHAT???YOU JUST THREW IT AWAY???"  I said, yeah, we have 7 kids at home and a lot of teeth to lose.  Once they don't believe in the Tooth Fairy anymore, into the trash they go.  "YOU HAVE SEVEN KIDS?" came the replies, and Maggie said, yeah, I'm in the middle and have 6 brothers.  "NO WONDER YOU'RE SO TOUGH AND BRAVE!!!" they all exclaimed.  It was all just so fun and lighthearted and the perfect way to get Maggie ready to get wheeled into surgery.  Dad dressed up and off they went... 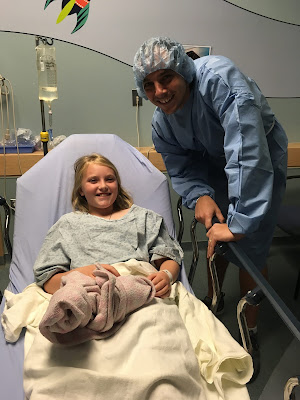 Phil was with her when they put her to sleep (using a mask because they couldn't find a nice vein to do an IV) and met a visiting doctor from Sweden who was there to learn from Maggie's surgeon.  Maggie said he said "Vello!" to her.  We felt so lucky to be in Boston with the best doctors and medical care.  Then the waiting game commenced.  Phil and I went down to the cafe for breakfast, carb-and-protein-loaded because we weren't sure when our next meal would be, then for a walk outside and then back up to the waiting room. 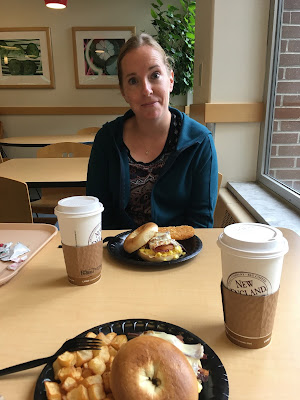 We were reading about the four temperaments and discussing which ones our kids had when boom! in walked the surgeon saying it was over and went great!  She explained that Maggie's tonsils were pretty bloody from all the past infections and her adenoids were covering 25% of her nasal cavity, so she removed them too.  I honestly can't remember what she said about the ear hole, but it's just a tiny incision covered with a tiny bandage along her ear line that hopefully won't be too noticeable.  The surgeon had scheduled 2 hours for the surgery but it only took 1 hour and 15 minutes.  A while later, we headed up to see her in the recovery room, and she was holding her pink blanky (that Daddy bought for her when we found out I was having a girl), her scapular (I guess they had taken it off her neck), and a new teddy bear from the hospital. 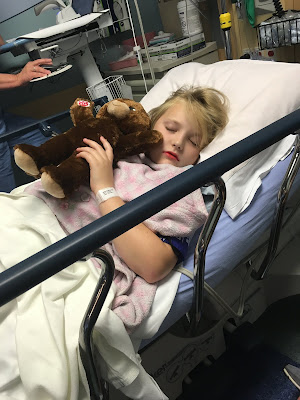 She was sort of out of it and dizzy and nauseous, but we were able to take her home about 2 hours later.  She did end up using three puke bags :( and said she never wants to be put under again.  Once we were home and she could rest comfortably and watch tv, she felt much better and was able to have a popsicle, lollipop and some oatmeal before bed last night.  We are giving her tylenol and ibuprofen every three hours, alternatively, around the clock, and her biggest complaint is that it hurts to talk and swallow and that her uvula is huge (it is!!).  Her ear isn't bothering her at all.  This morning she has been walking around, eating eggs and drinking water and even catching up on schoolwork because she is a cool geek like her mama ;) 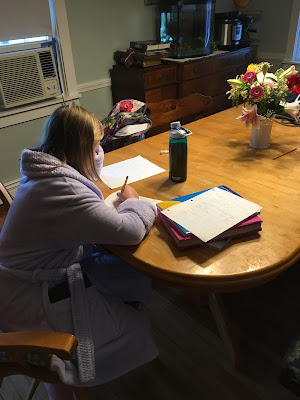 She hasn't taken the robe off yet or the fuzzy socks her cousin sent her.

We are seriously soooooo grateful that this surgery has been the biggest deal for our family - meaning, we haven't gone through anything like this before.  I don't know how we got so blessed to have seven healthy kids thus far, but we do not take it for granted, especially with moments like these.  The love and prayers and gifts Maggie has received have all made her feel so special and have reminded me how important a kind message can be to somebody going through something big in their life.  God is so good and we are all very thankful that this is behind us.
"Thunk" by Colleen