My Name is Colleen and I'm a Mom of Many...Failures (Or Why I Am Changing Our Approach to Kids and Phones)

To be clear, it's not that my children are my failures, it's just that I have so many times in my parenting journey where I feel like I have failed them.  I've realized (early on!) that having a lot of children doesn't make me a better mom, it just gives me more chances to keep improving.  Much like a student who has to repeat a grade in school wouldn't be considered a perfect student, having to raise seven toddlers doesn't a perfect mother make.  Oh sure, I've learned some tricks of the trade, but I've also learned what does not work just as frequently.

When I feel like I have failed, I can either wallow in my disappointment and beat myself up OR I can reevaluate what potentially went wrong, truly assess if there's anything I could have done differently, and then move on with that opportunity for self-improvement.  It's a lot of work!  As parents, we must never stop choosing to do the right thing.  Not the easy thing, not the popular thing, always the right thing.

It's pretty simple (not easy) to discipline young children for unacceptable behavior.  I've got that part down pat.  What I'm realizing now though is that sometimes you can look at your older children, think back over a parenting decision you've made...realize it didn't turn out well...and then want to change approaches when raising the younger children.

No, not in the literal sense.  But yes, if you were trying your best to raise great adults back then and you're still trying to do the same.  I think it takes a stronger, more loving, more courageous parent to admit their forthcomings and make the necessary changes than to just keep things status quo.  The definition of insanity is doing the same thing over and over again and expecting a different result, right?

But Colleen, give us a concrete example!

Back when our eldest was a middle schooler, he began asking for a phone.  We talked about and decided that we would allow him to have a phone when he graduated from 8th grade.  He was happy with that.  But then on his 13th birthday, we totally surprised him with a phone.  We had decided to give it to him early because he had just completed a babysitting class, and we wanted him to start being able to babysit for us every once in a while when we stayed close to home (walking the dog or going for a run together).  We didn't have a home phone, and we thought he needed his own phone to keep in touch with us on these occasions.

The thing about having a large family is that once you do something for one child, you are instilling a tradition for all.  So now each and every kid expects to get a phone on their 13th birthday.  Our oldest had turned 13 near the end of his 7th grade year, but the next two children turned 13 right at the start of 7th grade which felt really young to be handing them a phone.  Oh sure, we "dumbed down" their smartphones, not giving them data, not giving them the wifi password, not allowing social media, knowing their passwords, installing Covenant Eyes to protect them online, setting rules, and expecting them to obey.

As any parent will tell you, even the best-laid plans can easily be pushed aside for convenience's sake.  In short, we got tired of arguing with them, we got lazy about checking their phones, we relaxed the rules here and there.  Before we knew it, the kids with phones were seemingly addicted to them.  We are still constantly reminding them to put it away, asking them to go do something else...anything else!  That's why we love sports and jobs for them to keep them busy and engaged with the real world and real people. When they are home and "bored" we are left staring at three "normal" teens who drive us nuts because they are on their phones so much.  It's a constant daily battle, and we are not winning.  We feel like total failures as parents for even allowing the phones to come into the house in the first place.  I know a lot of parents who feel this way, whether it be phones, video games, computers, tablets, etc, technology seems to have taken over our kids' lives, and not in a good way.  When 2 out of 3 adults are addicted to their phones, and 1 out of 3 kids are cyberbullied, we need to do better!

Next month our next child is turning thirteen, and we have seen enough to stop the madness.  We now fully understand that it has been a short jump from getting a phone to being addicted to it, and we don't want to continue to hand over the device responsible for it.  We have researched and were excited to find out about a phone that looks smart but keeps our precious children off the dangerous internet. 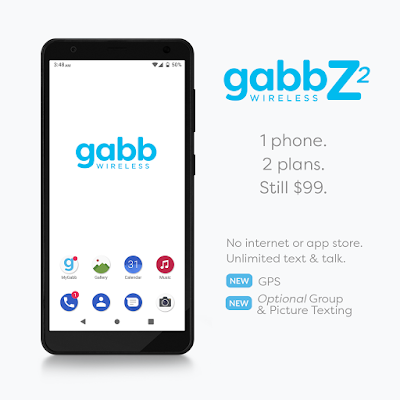 The Gabb phone is a smart-looking phone that allows kids to call and text but requires no parental controls, does not have access to the app store, no social media, and no internet browsing.  It gives kids exactly what they need to stay safe and connected without giving them what they don't need to become addicted or cyberbullied.  It's perfect!  I am so excited to partner up with Gabb to give you a promo code for $10 off a phone when you use MARTIN10.

Listen, I know that my husband and I are passionate about keeping our kids safe online.  You may think it's going too far to install Covenant Eyes on their devices or to give them a phone without internet access, but we work in a high school and we feel we still aren't strict enough.  We see so many terrible stories of addiction, bullying, depression, and anxiety that comes from social media and technology use.  Can these things have a proper place in a healthy lifestyle?  Absolutely!  Do we expect our kids to find that balance without some guidance?  Absolutely not!  Don't miss your opportunity to help your children navigate life avoiding as much heartbreak and angst as possible, and become happy and balanced adults.  That's literally our job...let's support each other in fighting the good fight.