Happy Friday!  Linking up with Kelly and the betters.

Today is the faculty's last day of school for the year at the high school where we work.  It's always weird to see them go on summer break, especially since some of us (ahem) have to continue to work all summer.  The building gets weirdly quiet and it takes some getting used to.  We are having a lot of retirements this year and losing some great people.  On that note, if you're looking to teach Spanish or English or become the Head Custodian at a lovely Catholic high school in Massachusetts, let me know!

Maggie won for Student Council President next year!!  She put a lot of effort into her posters and speech (a poem) and has truly blossomed this year in confidence and ability.  I am so proud of her.  Her bestie is standing right beside her, and she is the VP - what a perfect team! 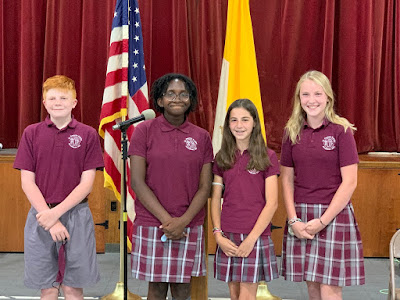 3)
For Eamon's graduation, I found these cute mugs on Etsy if anyone is looking for an adorable memento of a weird year! 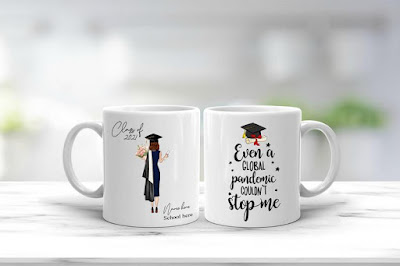 4)
We had a camper scare this year.  Let me back up, we don't actually have a camper, but we decided to rent one for our family retreat at Catholic Familyland in July (after staying in a cabin last year).  Well the guy from whom we were renting called to say it was in an accident and had to be repaired and he didn't know if it would be ready in time.  Poor Phil made it his full time job to find a new camper that sleeps 9 within an hour radius of the campsite, and finally found one.  Of course, that one camper was $800 more than our original one.  We prayed and fretted and researched and reached out to family and guess what?  The original guy came through!  He said they fixed something and the rest of the damages were cosmetic so he was going to take it back from the mechanic and rent it out as promised.  Thank God!  My kids would have never forgiven us if we weren't able to go.
5)
Andrew got his license!  Yay!!  Another driver in the house. 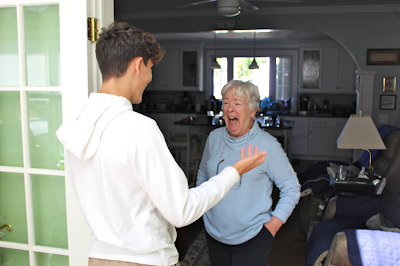 This whole driving test was such a scam.  He completed all the courses and did all the driving hours required with a teacher.  Then when he was able to schedule a road test, the RMV is backed up for months and months (due to the pandemic backing everyone up) so the driving school said that if we paid an extra $85, they could get him on a special list to get in sooner.  Andrew really wanted his license, and since he works two jobs in the summer, we wanted him to have it too, so we did it.  He got a call a few weeks later to show up at an RMV about 45 minutes from our house at 5:15 AM.  Yes, AM.  He had to bring $170 in cash to give to the driving school, and met with his driving instructor who took him out for a last lesson/to see the road test course.  Then he and a bunch of other kids (who had all paid cash as well) waited on a corner where a guy picked them up one by one, tested them, and dropped them back off saying they passed.  The instructor wrote that they passed on the back of their permit and said a license would come in the mail.  He never even had to go into the RMV!!  We also had to pay another $85 to the RMV online.  The whole thing felt wrong.  But his license did come and he's official.
6)
JP and Andrew work at such a nice ice cream shop, owned by one of our parishioners, and look what they had waiting outside for their workers who graduated recently? 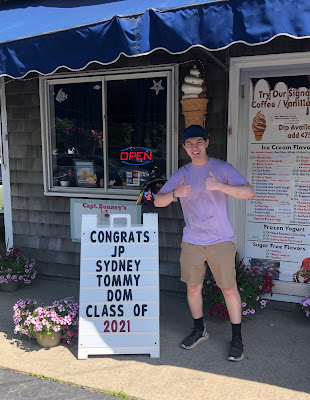 Plus they gave them each a gift - so sweet!  I hope I always have a kid or two employed there.
7)
What are you all planning for Father's Day?  I find it easy to get my husband gifts (though it's always things he needs, or a dinner out) but so hard to get my Dad a gift.  What do you give an 80 year old man who has everything, including the world's best daughter?  Ha!  I think a restaurant gift card it is :)
Have a wonderful weekend celebrating the dads in your life!
"Thunk" by Colleen