As always happens, this summer has flown by, and this year I had the added mom-guilt of trying to squeeze in enough family time before our eldest headed off to college.  We managed to go to the "big wave beach" in Rhode Island as one last family event before JP left.  It was a cloudy day, but fun, nonetheless! 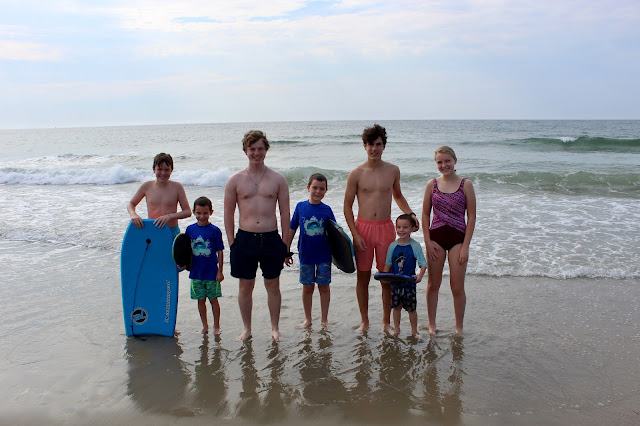 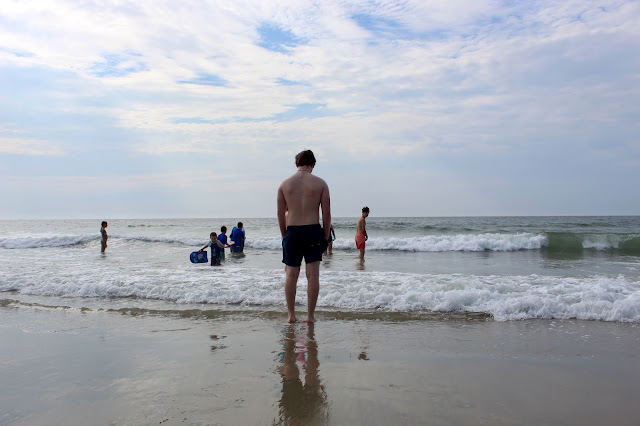 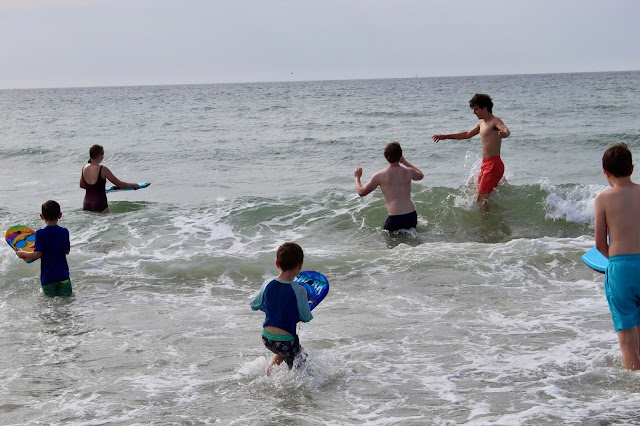 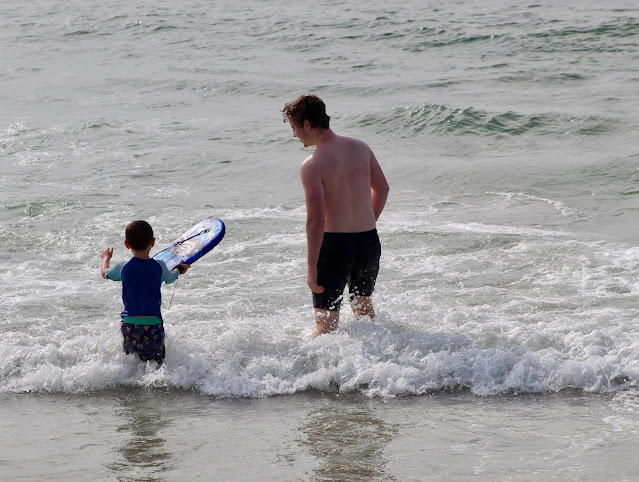 On JP's last day of work at the ice cream store, we went to visit him.  This shop was such a great summer job for him (and Andrew).  He made lots of tip money that paid for his portion of his first semester of college, and the owner and manager were so so nice to him.  The owner shook my hand on JP's last day to thank me for raising good kids, which made me tear up.  I hope all of my kids work here for a very long time! 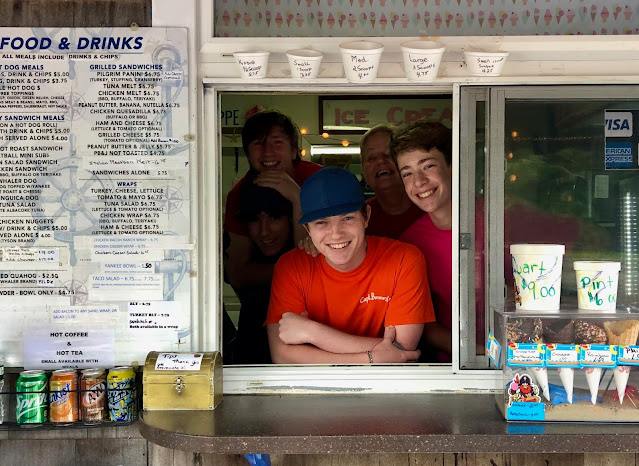 We drove down to Maryland to visit with Phil's side of the family for a few days before heading out to Ohio.  JP's move in day was also going to be Brendan's 5th birthday, so we celebrated a day early. 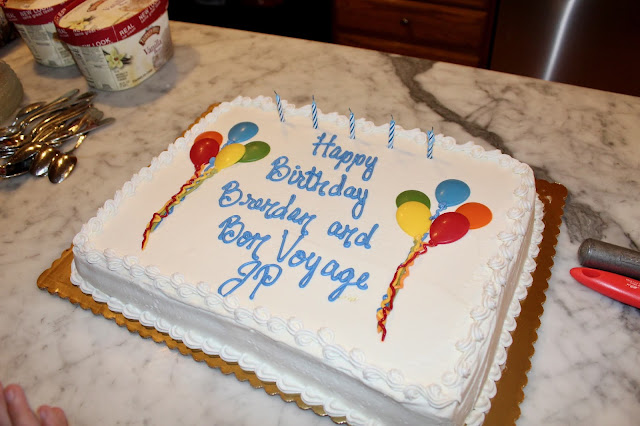 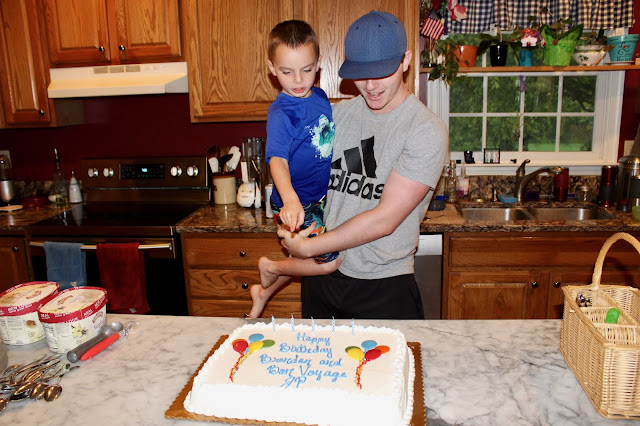 I love my two bookends and their relationship so much, and they are exactly the same age difference that I was with my oldest brother.  When he went to college, I started Kindergarten, and that's what JP and Brendan are doing.  I truly hope they can keep close through technology, something my brother and I weren't able to do. 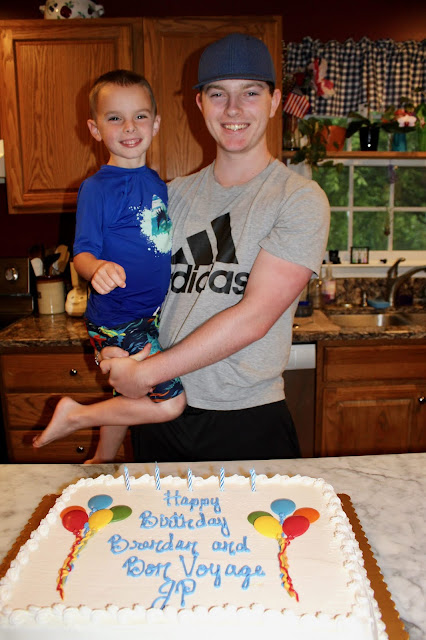 On the morning that Phil and I left for Franciscan University, Declan (age 7) started crying as we said goodbye, and I tried to console him by saying "Mom and Dad will be back in 2 days" and through sobs he asked "But what about JP, when is he coming back?" It was heartbreakingly beautiful to see how much he was going to miss his big brother.
We all will.
We arrived on campus 4 hours later, and got JP moved into his (tiny!) dorm room pretty quickly.  There are lots of students on the Orientation Team and the rugby team who helped move everyone in...they were so hot and tired but amazingly welcoming!!  We met his roommate and his parents (from New Hampshire - so close to us!) and felt very comfortable being back on campus around so many young and faithful students.  Man, I love Franciscan so much!! 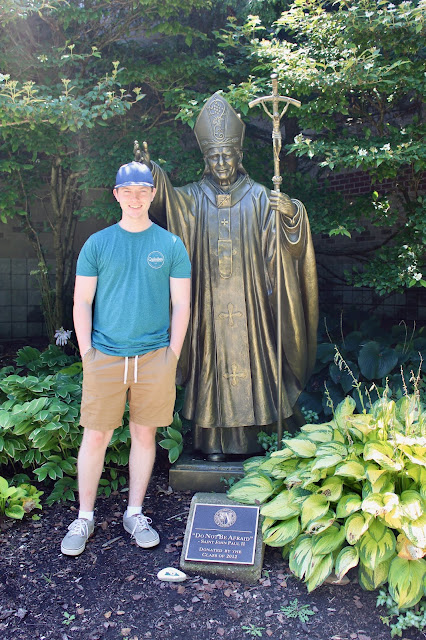 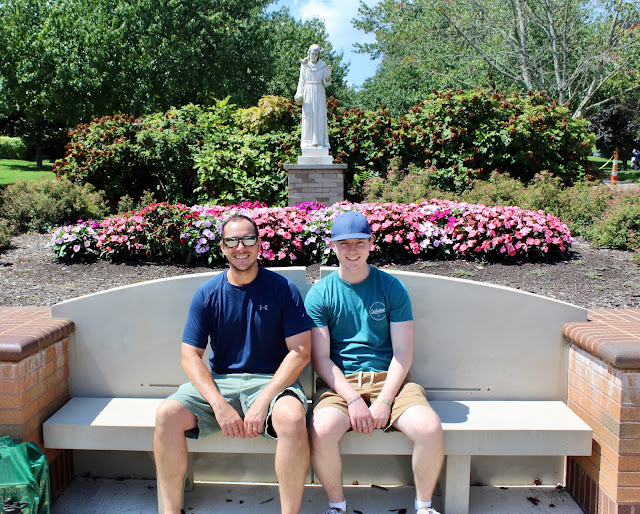 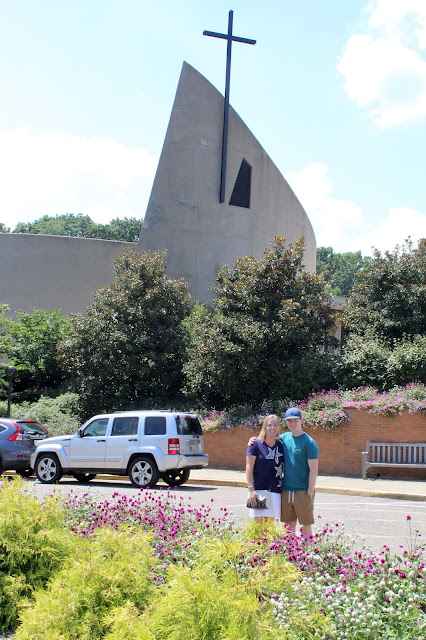 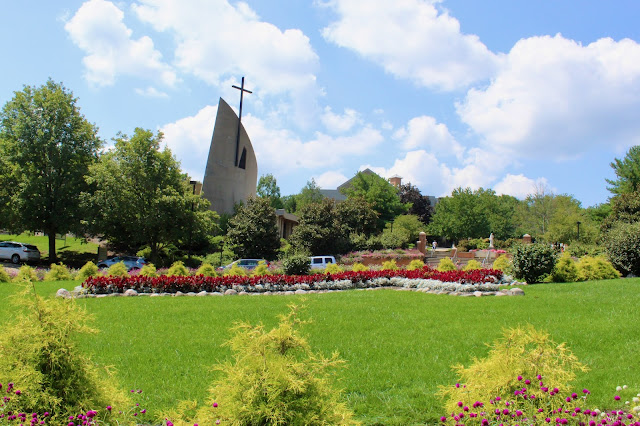 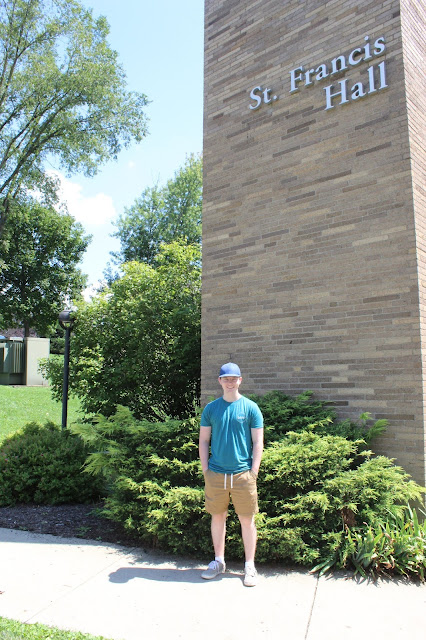 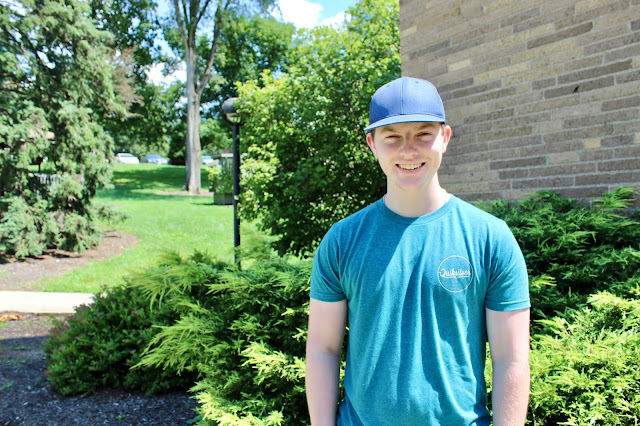 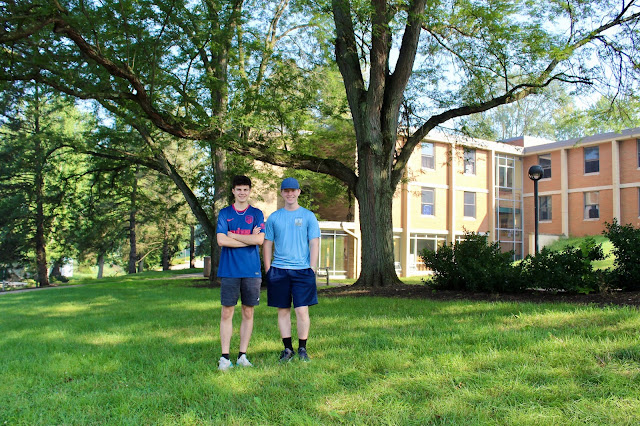 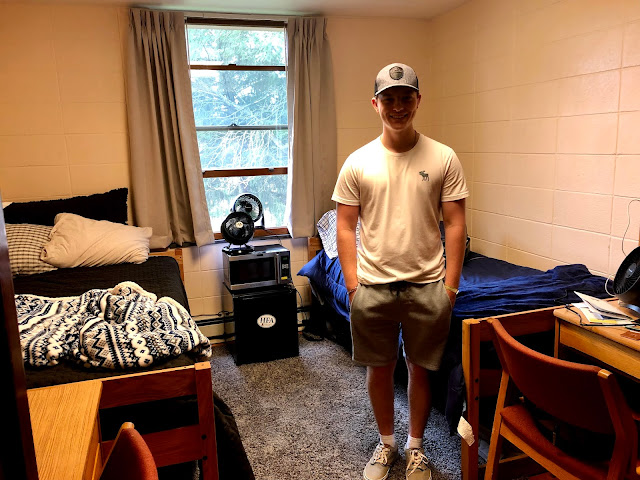 On the next morning, Phil and I went for a run around campus (the hills nearly killed us), and took photos in front of the apartments we lived in while we were dating.  They were "the projects" back then, but now the University owns them and they are called "Assisi Heights".  Much safer now but not a free place to live anymore! 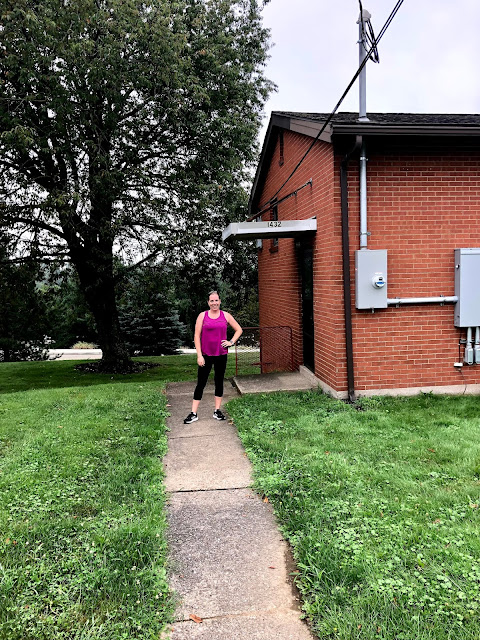 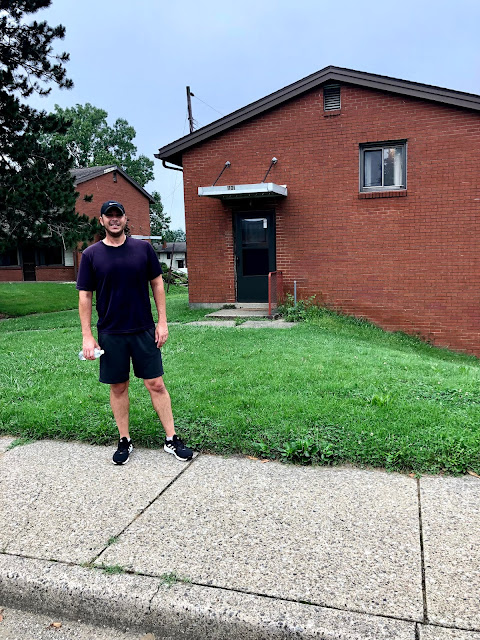 There was a whole Orientation Weekend full of events for students and parents, with the highlights being a fun opening ceremony, a good old Steubie Mass, an alumni reception, and a skit about life at FUS.  Of course, we had to get JP set up with his student ID, meal plan, SWOP job, class registration and textbooks as well.  It was busy but not overwhelming.
JP is a Biology major with a Pre-Health Concentration, which is the path he needs to take to become a Physician's Assistant.  He was very happy to find out that he doesn't have to take Organic Chem on this path!  We were very happy to find out that JP is a Sophomore thanks to all of his AP tests, and can finish college in three years.  He might have to stay for 3.5 years to be able to fit in a semester in Austria, which is important to him.  And coincidentally where his parents met :)
Since we dropped him off, we got a video (from his cousin, also a Freshman) of him learning to swing dance from a cute girl.  That is such a smooth Steubie move "Can you teach me how to swing dance?"  Haha, I should know since I used it as well.
One last photo before we said goodbye to my favorite John-Paul ever...and that's saying something if you know how much I love St. JP2 :) 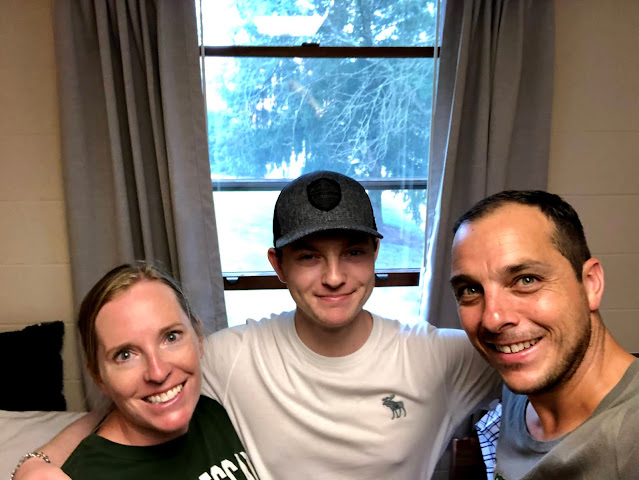 We miss you already JP, but you're going to have the best time at Franciscan, and that gives this sappy momma a huge sigh of relief.  Thank you baby Jesus, and keep watching over my baby.
"Thunk" by Colleen