What I Wore Sunday: Keeping it Real

So it's Christmas Eve eve, and my husband spent the night writhing in pain with body aches and chills and fever sweats.  He's got the flu, which means I am the flu widow because even though he's home, he basically has to lay around all day which of course makes me wish I was the sick one instead of him he will get well soon.

I did my part and met up with a friend in a parking lot who handed me some prescription Tamiflu that his wife had just used but still had some left.  Is it considered a drug deal if I didn't hand over any money?  No?  Good.

While he was taking said drugs and tylenol and eating toast and emergenC, I whipped up some spinach soup, thanks to Jen's last recipe post.  I called it Christmas Soup because it's green and 4 out of 5 kids ate it when bribed with a Hershey chocolate chaser.

The fifth kid can not be reached for comment because she is upstairs in bed and it's only 5:30 pm.  Yes, she was that indignant about not eating it. 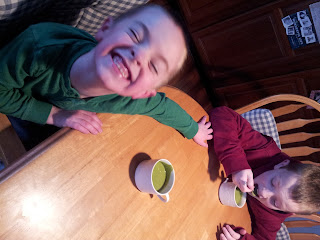 But since you asked nicely, I will go ahead and show you how I was dressed all day after I ran and showered this morning. 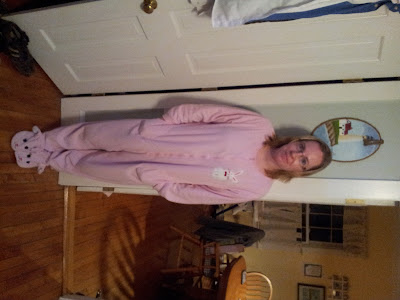 Don't be.  You too can achieve this look by not wearing any makeup, not brushing your hair after the shower, wearing your Target footie pajamas like you're three years old, and smiling smugly at the camera sans teeth.

Merry Christmas Adam (get it, the day before Eve?  She taught me that one)!!